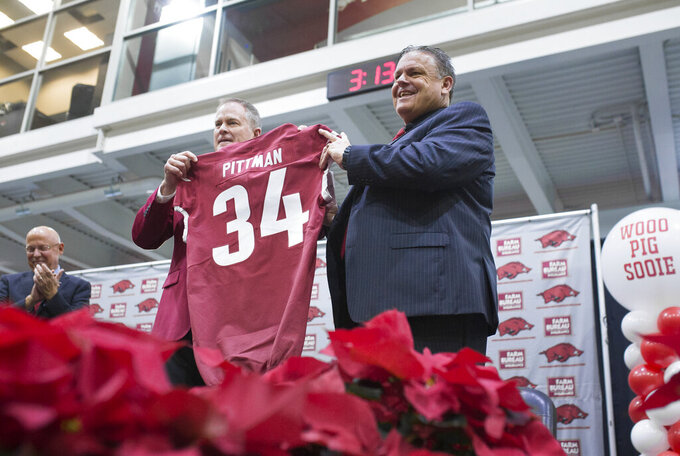 Coach Sam Pittman, right, and Hunter Yurachek, director of athletics, pose for pictures Monday, Dec. 9, 2019 in Fayetteville, Ark. Arkansas introduced former Georgia assistant Sam Pittman as its new head football coach. Pittman had a previous stop as an assistant with the Razorbacks and has spent much of his coaching career in the SEC. (Charlie Kaijo/The Northwest Arkansas Democrat-Gazette via AP)

FAYETTEVILLE, Ark. (AP) — Sam Pittman backed away from the microphone and wiped his eyes, his emotions getting the better of him as he addressed a throng of Arkansas fans Monday afternoon.

Pittman was introduced as the 34th head coach in program history, ending an almost one-month search for a new Razorbacks leader after former coach Chad Morris was fired after less than two full seasons and a 4-18 record.

Pittman, 58, is no stranger to Arkansas having served as an assistant coach under Bret Bielema from 2013-15 before taking a job as the offensive line coach at Georgia under Kirby Smart. Pittman also coached at North Carolina and Tennessee.

“I'm a wreck,” Pittman said as he tried to gather his emotions. “This means a lot to me.”

After regaining his composure, Pittman, who signed a 5-year, $15 million contract, said the team would put in the work to try and climb out of the cellar of the SEC West. Pittman inherits a program that has lost 19 consecutive conference games.

Arkansas athletic director Hunter Yurachek met with a number of coaches before he settled on Pittman. The deal was finalized on Sunday, a day after Pittman coached Georgia in the SEC Championship game against No. 1 LSU.

Pittman said he encouraged his agent to reach out to Arkansas to express his interest in the position. From there, the process moved quickly and Pittman boarded a plane with Yurachek on Sunday night to head to Fayetteville to finalize the deal and to meet with the team.

“The Arkansas football program is one of great tradition and can have success in the SEC,” Yurachek said prior to introducing Pittman. “It was important we took our time to truly identify a man who wanted to be here and understood the expectations we have. We had to find a coach with the utmost integrity on and off the field. It was important to find a coach who had experience in the SEC, winning battles in recruiting, in the trenches on the field. From the first time I spoke with him, he wanted to be at Arkansas.”

Pittman said he had received close to 500 text messages since the announcement on Sunday, many of those offensive line coaches who offered their support for one of their own.

A number of college coaches also contacted Pittman inquiring about joining the Arkansas staff, he said. Pittman expects to have several assistant coaching positions filled by the end of the week. The university has allocated a reported $3 million for Pittman to complete his staff.

Pittman said he grew up in nearby Grove, Okla., "a Razorback among a whole state of Oklahoma and Oklahoma State fans.”

“When I came here in summer of 1979, I was a one-star athlete at a camp,” Pittman said. “Lou Holtz was the coach, and I fell in love with the place. When my wife and I came back seven years ago, that was one of our dreams. Coming back now is whatever is better than a dream.

“You never would have imagined all of this happening back in 1979. In my heart, I'm ready to be the coach at Arkansas. I feel good about it.”

Yurachek said he initially compiled a list of almost 50 potential candidates and worked from that list over the past two to three weeks.

“I spent a number of hours on the phone talking to people and those in the NFL trying to determine what our pool should look like,” he said. “I worked it down to about 15. Sam Pittman, I can tell you, was the only candidate who received an offer.”