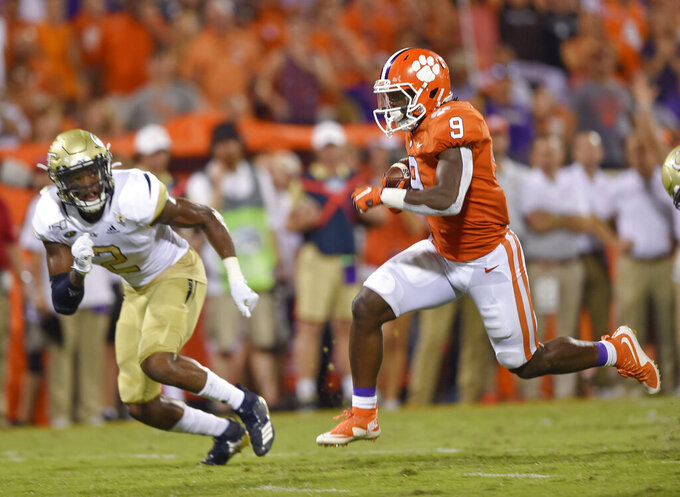 CLEMSON, S.C. (AP) — Travis Etienne ran for a career-high 205 yards and three touchdowns, including one from 90 yards out, and No. 1 Clemson overpowered Georgia Tech 52-14 Thursday night for its 16th straight victory.

On an offense filled with stars, it was Etienne who shone brightest for the defending national champions. His 90-yard score tied for the longest rushing TD in Tigers history. Etienne added scoring runs of 14 yards and 48 yards as Clemson opened a 35-0 lead and was never pressed by the Yellow Jackets in the season opener for both Atlantic Coast Conference teams.

It was not the flashy return that most of college football expected out of Clemson quarterback Trevor Lawrence. The 6-foot-6 sophomore, so poised and polished in leading the Tigers to a 15-0, title-winning season, threw two interceptions in the first half. Lawrence had just four picks all last year.

Still, Lawrence had his moments. His hustle after a bad interception knocked defensive back Tre Swilling out of bounds at the Clemson 3, and the Tigers defense kept the Yellow Jackets from scoring. Lawrence opened things with a 6-yard rushing score and threw a perfect pass to Tee Higgins for a 62-yard touchdown.

Mond, who threw for 194 yards, had touchdown passes of 21 and 3 yards and ran for another score in the first two quarters as Texas A&M raced to a 28-0 halftime lead.

Quartney Davis had 85 yards receiving and a touchdown and Jhamon Ausbon added a touchdown catch. First-year starter Jashaun Corbin had 103 yards rushing with a touchdown reception and a TD run.

Myles Jones had two of Texas A&M's four interceptions, and the Aggies had three sacks and nine tackles for losses.

PROVO, Utah (AP) — Zack Moss ran for 181 yards and a touchdown and the Utes scored three more TDs off three BYU turnovers in the opener for both teams.

The Utes (1-0) earned their ninth straight victory in the 100th game in the Holy War rivalry. Moss propelled the offense after halftime by gashing the Cougars for a series of big runs. He averaged 6.2 yards on 29 carries.

The defense took care of the rest.

Zach Wilson totaled 208 yards on 21-of-33 passing and added 43 yards on the ground to lead BYU (0-1). Wilson also threw a pair of interceptions that Utah returned for touchdowns.

The redshirt senior transfer completed 12 of 23 passes without an interception while sharing playing time with true freshman Dillon Gabriel, who finished second in the competition for the starting quarterback job that opened because of an injury sidelining two-time American Athletic Conference offensive player of the year McKenzie Milton.

Wimbush, who tossed TD passes of 37 and 12 yards to Gabriel Davis, was 13-2 as a starter over the past two years at Notre Dame.

The Knights improved to 26-1 since the start of 2017, with the lone loss coming against LSU in last season's Fiesta Bowl.