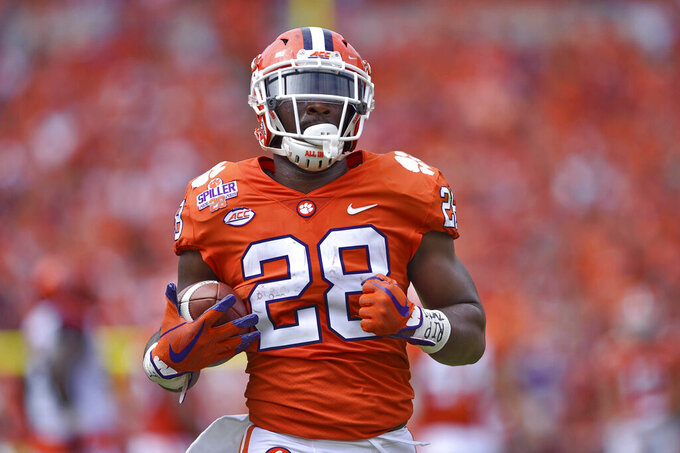 COLUMBIA, S.C. (AP) — When ex-Clemson running back Tavien Feaster put on his South Carolina jersey for the first time at a photo shoot during the summer, he took a deep breath and exhaled slowly.

Feaster was a five-star recruit out of Spartanburg (South Carolina) High three years ago who was part of two national titles at Clemson and received a bachelor's degree during his time with the Tigers. Feaster looked like he'd gained a foothold in Clemson's backfield, gaining 669 yards and starting 11 games in 2017. But a knee injury the next summer dropped him behind Atlantic Coast Conference player of the year Travis Etienne.

Following spring practice this year and the prospect of playing behind Etienne again, Feaster decided it was time to move on.

"I just needed more opportunity for myself and get myself in a better position for things ahead," Feaster said.

The 6-foot, 221-pound senior believes he's found that with the Gamecocks, Clemson's state rival. Feaster, who had a 13 yard touchdown run in last year's 56-35 win over Gamecocks, knows many Clemson and South Carolina fans won't understand his choice. That's OK with him as long as he gets to compete.

"If they don't really don't like my decision," he said, "all I ask is that you respect my decision."

Feaster felt like a change was needed toward the end of last season as Etienne helped the Tigers' offense cap a 15-0, national championship year. He took part in Clemson's spring drills as he completed his college degree, then realized the bulk of Clemson's carries would go to others.

Brown promised nothing except Feaster would get a chance if he worked hard and earned one. That was more than enough for Feaster, a homebody, according to his mother who doesn't like to get too far away from family. Latasha McCree-Mcelrath said she would tape her son's College Football Playoff games and when he returned, Feaster would sit in the living room with family and watch them, imitating the play-by-play.

"He likes spending his time with us," she said.

Feaster won't just slide into South Carolina's backfield. The position is one of the most experienced on the team with seniors Rico Dowdle, A.J. Turner and Mon Denson all returning. But South Carolina finished 12th in the Southeastern Conference in rushing per game, something Brown was brought in to change.

Brown said Feaster brings leadership and experience at the highest level to the Gamecocks. He's also an accomplished pass-catcher out of the backfield. "I love the way he goes about his business," Brown said.

Clemson coach Dabo Swinney had hoped Feaster would stay and be that experienced backup, the way senior Adam Choice did to last year's running backs. But Swinney said Feaster earned his chance to leave by getting his degree.

"Doesn't mean I agree with it," Swinney said. "But again, that's his decision."

Feaster said he got a text from Swinney the day before his Aug. 5 graduation, congratulating him and wishing him the best going forward.

"Me and him had some kind words," Feaster said. "That made me smile."

Feaster has gotten a couple of questions from his new teammates about playing for the national champions. He expects that will die down as the season goes on. Feaster is glad to have a chance to finish strongly and make an impression for the NFL.

"At the end of the day, you're going to do what's best for you," he said. "That's all that really matters."