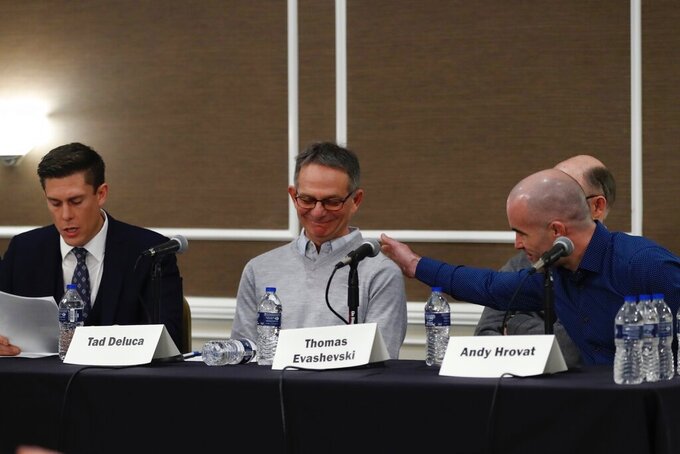 Tad Deluca, center, listens as attorney Parker Stinar addresses the media during a news conference, Thursday, Feb. 27, 2020 in Southfield, Mich. Deluca, a University of Michigan wrestler from the 1970s says he was kicked off the team and lost his financial aid after complaining to a coach that he had been abused by a sports doctor. Deluca identified himself as the whistleblower whose 2018 complaint about the late Dr. Robert E. Anderson led to a police investigation. (AP Photo/Carlos Osorio)

ANN ARBOR, Mich. (AP) — An attorney announced Tuesday that his firm represents more than a 40 people, including two former football players and an ex-hockey player, in the University of Michigan sexual abuse case.

Parker Stinar told The Associated Press that one of his new clients helped the Wolverines win the 1997 national championship in football and one went on to play in the NHL.

The university’s president has apologized to “anyone who was harmed” by Dr. Robert E. Anderson, set up a hotline for others who have information to come forward and offered counseling services to those affected.

The law firm also has a meeting scheduled Wednesday with the independent investigators the university has hired, Stinar said.

University of Michigan officials have acknowledged some university employees were aware of accusations against the doctor prior to the whistleblower’s 2018 complaint that led to a police investigation.

The school announced last week it had received more than 100 “unique complaints” about Anderson.