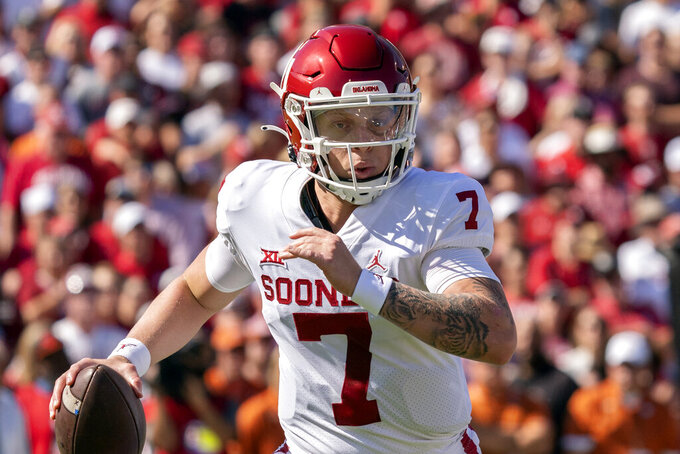 FILE - Oklahoma quarterback Spencer Rattler (7) scrambles during the first half of an NCAA college football game against Texas at the Cotton Bowl, Saturday, Oct. 9, 2021, in Dallas. Former Oklahoma quarterback Spencer Rattler wanted a place where he could revive his stalled college career and regain his status as a rising talent destined for the NFL. Rattler didn't think there was anyone better to help than former Sooner assistant and now South Carolina head coach Shane Beamer. (AP Photo/Jeffrey McWhorter, File)

COLUMBIA, S.C. (AP) — Spencer Rattler is not sure how things went sideways when he was Oklahoma's quarterback, he just knows it was time for a reset and believes he's found it at South Carolina.

“I feel totally refreshed to be at a new university, a great university like this,” Rattler said Wednesday. “I feel very comfortable here. I made a great decision and I'm happy I'm in this position.”

Rattler seemed in the perfect spot for him at Oklahoma, He was a five-star talent with a power arm who led the Sooners to the Big 12 Championship in 2020.

He began 2021 as a Heisman Trophy front runner and figured to end as the NFL's likely No. 1 draft pick this spring. And while the Sooners kept winning, they weren't bludgeoning opponents — they won five of their first six games by a touchdown or less — and Rattler took the fall.

Rattler was replaced by freshman Caleb Williams in the middle of a 55-48 win over Texas and never started again.

“It was crazy, it was a whirlwind,” Rattler said. “On the job my second year, had a great year, only lost two games. This past year, things went how they went, I couldn't control them.

“I felt like as a player I was doing fine,” he continued. "We were undefeated at the time, but I guess it wasn't enough.”

Rattler knew he had to leave the Sooners. His friend, Oklahoma tight end Austin Stogner, was also in the NCAA transfer portal and talked to Rattler about joining former Sooners' assistant Shane Beamer, now starting his second season as South Carolina head coach.

A Zoom call was scheduled and Rattler loved what he heard.

“They impressed me a lot,” the quarterback said of the Gamecocks' pitch.

Rattler doesn't waste time wondering what might've been if he had stuck it out at Oklahoma with his head coach Lincoln Riley and rival Williams both at Southern Cal.

Rattler arrived on South Carolina's campus about a month ago and has quickly settled in the quarterback room. Beamer guaranteed him nothing since the Gamecocks return starter Luke Doty at the position. But Rattler said he is ready to learn, compete and handle whatever comes his way.

“He’s done a great job of coming into this program, immersing himself within the team and being a great teammate,” Beamer said.

Rattler’s transition has been helped by several other noteworthy players who have transferred to South Carolina, including Wake Forest running back Christian Beal-Smith and North Carolina State defensive lineman Terrell Dawkins.

His buddy, tight end Stogner, is set to arrive later this year.

That hasn't stopped the hype from engulfing South Carolina fans. Rattler is the first five-star prospect on the roster since defensive end Jadeveon Clowney' three-season run ended in 2013.

Rattler's got an NIL agreement with a local Chevrolet dealership for a garnet-colored Silverado, one of several tie-ins he's likely to garner with the Gamecocks.

The team starts workouts in two weeks with it spring game on April 16.

Rattler wanted his new home to be somewhere “that has that love of their team,” he said. “I think I landed in the perfect spot.”

Said Rattler: “I thought it was kind of funny."

Rattler said he is not motivated by trying to prove his worth to critics, only about helping his new team succeed.

“I feel like I did my part" at Oklahoma, Rattler said. “Obviously, you can't win every game by 50 points. It didn't work out. That's how it is. But I'm not trying to show anything but the best version of me.”