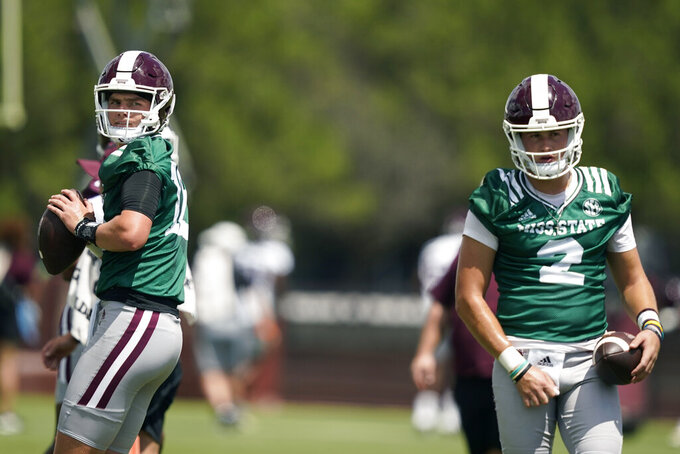 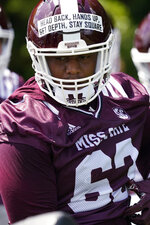 The Bulldogs (7-6, 4-4 Southeastern Conference in 2021) certainly have a steep climb in the loaded West Division that features defending league champion and national finalist Alabama, Auburn, Texas A&M and rival Mississippi.

But MSU is beaming with cofidence.

Last year's youthful squad took a step forward with a three-game improvement over the previous season and upsets of three ranked league foes on the way to tying for third in the division and clinching a 12th consecutive postseason berth.

Disappointing season-ending losses to Ole Miss and then Texas Tech in the Liberty Bowl suggested there’s more work to do in Starkville. But with eight returning starters on both sides of the ball, they feel confident that experience can take them to the next level.

“I’m excited to see what this team can do,” defensive back Collin Duncan said on a Bulldogs podcast. “This is probably the most complete team that I’ve been around at Mississippi State.”

One of MSU’s most important veteran is junior quarterback Will Rogers, who continued his record-breaking play in Leach’s “Air Raid” offense.

Rogers recorded the SEC’s third-highest single season passing total with 4,739 yards — more than double his freshman total of 1,976 — and averaged a league-best 364.5 per contest. His yardage and 36 touchdowns (on 74% passing) were among 25 school records broken last fall.

Leach believes more success is possible in the high-powered scheme.

“Will stepped in and had great leadership qualities and wasn’t afraid to talk to the locker room as a freshman,” the third-year coach said last month during SEC media days. “It allowed him to excel early. It allowed him to focus in on playing because he didn’t have some of that stage fright that freshman do."

Leach added, “Will’s going to get better and better. The better he synchronizes with the other offensive players, the better everybody is.”

Defensively, MSU remained consistent, ranking fifth in the SEC in yardage allowed per game (344.8) and third against the run (113.0). There’s still room for improvement in phases such as sacks, turnovers and third down conversions, which they believe their experience will correct.

Eight of MSU’s top 11 tacklers return, and the experience extends from front to back with three starters returning up front and in the secondary. In the middle, Nathaniel Watson looks to build off an 84-stop, five-sack season, while fellow linebacker Tyrus Wheat had 7.5 sacks among 46 tackles. Cornerback Emmanuel Forbes and safety Jalen Green combined for five of the Bulldogs’ 11 interceptions that ranked mid-pack last season.

Leach in June received a two-year contract extension through 2025 that raised his base annual salary to $5.5 million. His entire coaching staff is also back for a third season, including associate head coach/nicklebacks coach Tony Hughes, who has served two stints at MSU totaling 11 years.

Five players are vying to be the Bulldogs’ place kicker following the departures of Nolan McCord (to Western Kentucky) and Brandon Ruiz. Leach expressed optimism of finding one from among Coastal Carolina graduate transfer Massimo Biscardi; transfers Marlon Hauck and Ben Raybon; and freshmen Hudson Hollenbeck and Jordan Kennedy.