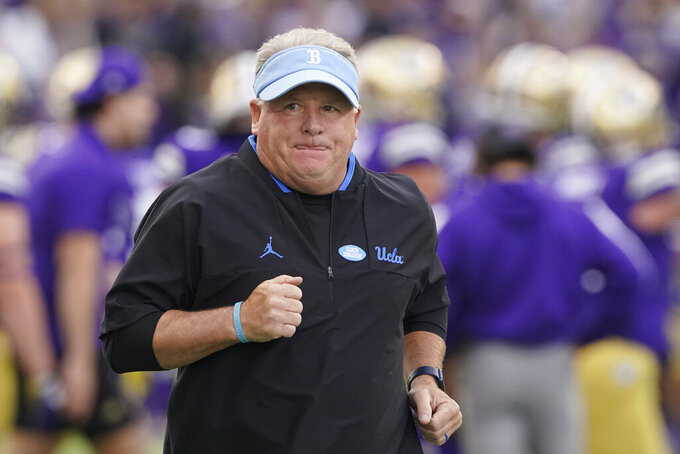 The biggest question is if Kelly can continue the climb to Pac-12 contention.

The Bruins were picked fourth in the conference preseason poll but still find themselves in the shadow of rival Southern California, which is ranked No. 14 in the preseason and continues to dominate local and regional headlines following the hiring of Lincoln Riley.

Even though he had chances to channel Rodney Dangerfield and claim “no respect,” especially after the Bruins won last year’s crosstown showdown over the Trojans 62-33, Kelly isn’t trying to get caught up in who has bragging rights in LA.

“Who runs the city, who doesn’t run the city, I’ll leave that up to the voters, I guess,” said Kelly, who has an 18-25 record during his four years in Westwood.

If the Bruins are going to contend for the Pac-12 title, they will need big seasons again from quarterback Dorian Thompson-Robinson and running back Zach Charbonnet. They were the leaders on an offense that led the conference in average points per game (36.5) and second in yards (441.3).

Thompson-Robinson surprised many by deciding to return for a fifth season. He accounted for 30 touchdowns last season (21 passing, nine rushing) and cut down on his turnovers, which plagued him his first three years.

Charbonnet led the conference with seven 100-yard rushing games and was second in rushing yards with 1,137.

“I think the biggest thing is him being able to respond to adversity, and that’s been the nature of the whole team,” offensive lineman Jon Gaines II said. “We didn’t have the best couple of seasons when we first got here, but he’s always been the face of the franchise as long as we’ve been here. And he’s the perfect example of how we’ve grown over the years.”

Bill McGovern, who was one of Kelly’s assistants when he coached the Philadelphia Eagles, was hired as defensive coordinator following the resignation of Jerry Azzinaro. His most significant task will be to fix a pass defense that gave up 260.2 yards per game last season, the worst in the Pac-12.

KEEP AN EYE ON

Wide receiver Jake Bobo, a graduate transfer, should emerge as Thompson-Robinson’s favorite target after the departures of tight end Greg Dulcich and wide receiver Kyle Phillips to the NFL. Bobo made at least five catches in nine games for Duke last season and finished with 74 receptions for 794 yards.

While fans are looking ahead to the Bruins’ move to the Big Ten in 2024, Kelly is trying to keep the focus on this year’s team until he has to go out on the recruiting trail.

“I think when I got the news that this was going to happen, that was my first question: When? Then when we found out it’s two years, I think that puts a little bit different spin on it,” said Kelly, who learned about the move while golfing with Ohio State coach Ryan Day in New Hampshire. “Our sole focus and attention is making the 2022 season as memorable as it can be for our players. It’s a unique situation. I’ve never been in it before. But I think the biggest thing is to focus on what we can control.”

UCLA hosts Pac-12 favorite No. 7 Utah on Oct. 8 before traveling to No. 11 Oregon two weeks later. The Bruins will host Southern California on Nov. 19.

By Ralph D. Russo 10 minutes ago
By Will Graves an hour ago
By Anne M. Peterson 5 hrs ago
6 hrs ago
By Greg Beacham 6 hrs ago