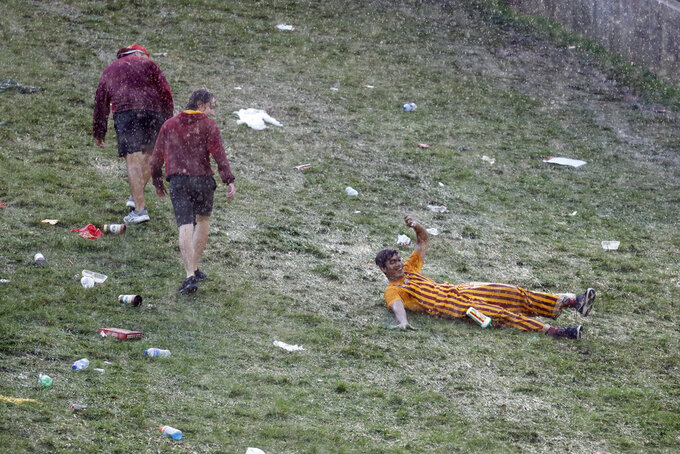 A student slides down a hill in Jack Trice Stadium during a lightning delay in the first half of an NCAA college football game between Iowa State and Iowa, Saturday, Sept. 14, 2019, in Ames, Iowa. (AP Photo/Charlie Neibergall)

DES MOINES, Iowa (AP) — Amid applause and smiles, Iowa Gov. Kim Reynolds on Wednesday established this Saturday as Carson King Day, celebrating the story of a 24-year-old security guard whose hand-written sign held up on ESPN during the Iowa-Iowa State football game resulted in more than $1 million being pledged for charity.

King, you see, was running low on beer and ended up with a windfall that he said he plans to give to a children's hospital.

If only it was that simple. But nothing about the Sept. 14 game has been simple, and nearly two weeks later it remains the talk of the state.

The game itself was a six-hour, weather-delayed marathon that ended with Iowa beating Iowa State , 18-17. Then came allegations that Iowa band members were attacked by Iowa State fans and questions about how administrators responded. Some wondered whether the "CyHawk" rivalry game, which dates to 1894, should even be held.

And that was before the state's biggest newspaper got accused of ruining King's feel-good story by digging up racist tweets — and then having its own reporter asked about controversial tweets of his own.

Where to start? First there is the rivalry.

As Iowa coach Kirk Ferentz put it, "I don't think a lot of people outside our state bounds necessarily understand the intensity of the rivalry and just what a great thing it is."

It hasn't always been great. Escalating tensions between the schools shelved the game for all but a couple years until the 1970s. Under pressure from state legislators, the schools agreed to resume the rivalry, with the game alternating between Ames and Iowa City.

This year, interest was especially high as both teams were highly touted, leading ESPN to air its popular "GameDay" show from Iowa State's campus in Ames.

The initial challenge was just playing the game amid thunderstorms and drenching rain that caused repeated delays. The game was a nail-biter, but that was only the beginning of the story.

Iowa band members soon complained of rough treatment by Iowa State fans before, during and after the game. The athletic directors for the schools acknowledged some issues but suggested everyone move on — prompting outraged band members to post more specific allegations on social media. They claimed they were groped, hit with beer cans and that one student suffered broken ribs.

A full 10 days after the game, Iowa State athletic director Jamie Pollard said the school was taking the issue seriously but also said the worst abuses could have been avoided if the Iowa band had taken a stadium exit suggested by officials.

Iowa President Bruce Harreld, meanwhile, told the student newspaper, "I'm not convinced at all that we should play this game again."

Asked about that possibility, Reynolds responded: "I just really don't believe that that's even an option." The governor then expressed confidence the schools could work out any problems "and we'll see this great rivalry continue moving forward."

Which brings us to the security guard.

King is an Iowa State fan who got up early and drove from his suburban Des Moines home to Ames for the game. During the "GameDay" telecast, he held up a handwritten sign reading, "Busch Light Supply Needs Replenish." He'd also written his account name for Venmo, a digital payment company.

No one was more surprised than King when money started pouring in, and after he publicized his plan to donate the proceeds to the University of Iowa hospital, the cash started to pile up with donations from Busch brewer Anheuser-Busch and Venmo. With donations topping $1 million, King was celebrated on national TV shows and in social media.

Then, King acknowledged to local TV stations Tuesday that in researching a story, The Des Moines Register had found two racist comments he had made on social media in 2012 at age 16.

King apologized for comments he'd forgotten about that he said now made him "sick." He said the Register had been kind to him and didn't criticize the reporting, but even before the story was posted online Tuesday night plenty of others were blasting the newspaper for finding the bad in something so good.

Register Editor Carol Hunter posted an explanation of how the paper reported the story and why it made only a brief reference to the racist comments in an otherwise laudatory story. But as Anheuser-Busch and other companies backed away from King, people began looking into past social media comments by the reporter who wrote the story. They found that years ago, offensive tweets dealing with race and gay marriage were credited to an Aaron Calvin, matching the name of the reporter.

That prompted the Register to issue a tweet stating, "The Register is aware of reports of inappropriate social media posts by one of our staffers, and an investigation has begun."

On Tuesday night, Calvin posted a tweet in which he acknowledged deleting some earlier messages "that have been inappropriate or insensitive," and he apologized.

At least for King, the situation seems to be ending well. He peered over Reynolds' shoulder as she signed the proclamation establishing a day in his honor.

King then turned to snap some selfies with the governor.

This story has been updated to correct details about what fan's sign listed.