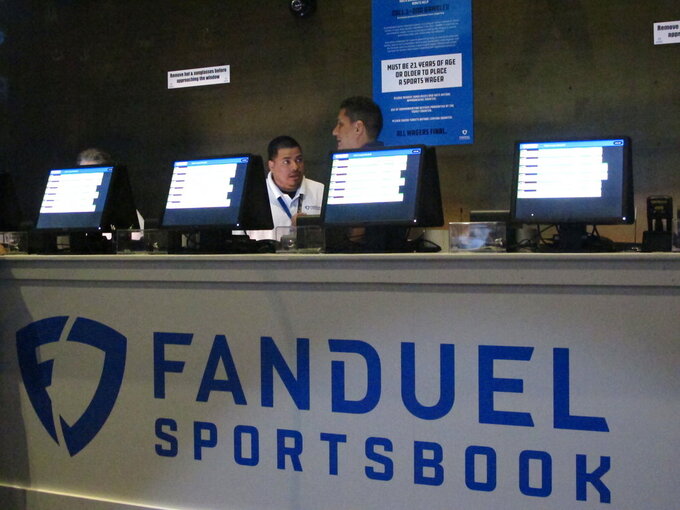 This July 14, 2018 file photo shows workers at the FanDuel sports book at the Meadowlands Racetrack in East Rutherford, N.J., preparing to take bets moments before it opened. FanDuel on Nov. 30 paid off on bets customers made on Alabama to win the national college football championship a month before the game is played. (AP Photo/Wayne Parry, File)

FanDuel sportsbook is paying out bets from people who picked Alabama to win the college football national championship — over a month before the game will be played.

The company announced Friday night it is treating the top-ranked Crimson Tide as the winners already, and paid out single-game bets to customers' online or mobile accounts. Those who made bets in person can bring their winning slips to that location to be paid.

Alabama also is being marked as a winner on parlay bets that included the necessity of it winning the title.

FanDuel says the move could cost it $400,000. Should Alabama not win the national championship, FanDuel will pay out bets on whichever team wins the title.

It says it wants to reward customers for betting on a team with odds that were so lopsided it was difficult to make money.

"It has been a dominant season for the Crimson Tide and our traders have seen enough," the company said in a statement Friday night.

The payout involved all future bets on Alabama to win it all that were made before 5 p.m. Friday. The Tide opened at nearly 2-to-1 odds before the season started, or plus 195, meaning a $100 bet would return $195.

But its season has been so dominating that Alabama is now listed at minus 280, meaning a gambler would have to put up $280 of his or her own money in a bet to win $100 on Alabama.

The point spread on most of its games has been in the 20- to 30-point range, with one game against Citadel going off with Alabama as a 53.5 point favorite. (They did not cover that spread). And money line bets on Alabama, meaning a bet on them just to win the game without doing so by a certain amount of points, have often been astronomical.

"It's a way to reward our customers for betting on Alabama when the odds were really hard to make any money doing it," said FanDuel spokesman Kevin Hennessy.

It's also a way for the company to grab attention as it attempts to gain market share in the rapidly growing legal U.S. sports betting market. FanDuel in September agreed to pay out an $82,000 bet to a New Jersey customer that its computers mistakenly promised on what should have been a low-odds development on a Denver Broncos-Oakland Raiders game.