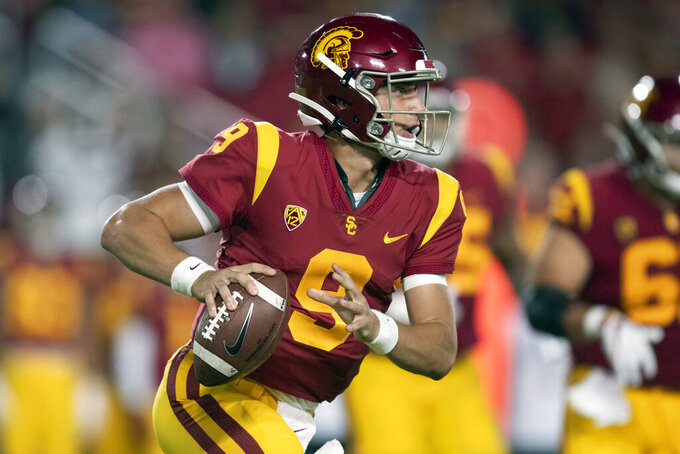 FILE - In this Sept. 31, 2019, file photo, Southern California quarterback Kedon Slovis is shown during an NCAA college football game against Fresno State, in Los Angeles. Slovis couldn't believe he woke up last Sunday as Southern California's starting quarterback. With J.T. Daniels out for the season, the freshman backup is improbably in charge when the Trojans face No. 23 Stanford's tough defense. (AP Photo/Kyusung Gong, File)

LOS ANGELES (AP) — Kedon Slovis enrolled early at Southern California this year as an unheralded recruit expected to provide quarterback depth in the seasons ahead.

Slovis quietly wanted a whole lot more for himself, and he wanted it to happen a whole lot quicker.

He never imagined it quite this way, however: After several months of hard work and one unfortunate injury for J.T. Daniels in the Trojans' season opener, Slovis will be the starting quarterback in his second game at USC.

"It's nothing you really expect," Slovis said after practice. "But as a backup quarterback, you always have to be prepared. It's really unfortunate what happened, but you've got to be the next man up and do your best."

The 18-year-old freshman from Scottsdale, Arizona, is the unlikely leader of the Trojans (1-0) on Saturday night when they host No. 23 Stanford (1-0). An unsung passer who has already had three quarterbacks coaches since he committed last year is inheriting the job recently held by Carson Palmer, Matt Leinart, Matt Barkley, Cody Kessler and Sam Darnold.

"It was definitely weird waking up Sunday morning," Slovis said after practice. "But nothing changes for me. I'm still going out to practice every day, except now it's with the (starters) instead of the (backups). All of those guys are doing a great job of giving me a lot of encouragement."

Slovis already played his first half of college ball last week after Daniels badly injured his knee while being blitzed by Fresno State 27 seconds before halftime. Slovis took over and went 6 of 8 with an interception while the Trojans largely relied on their running game and special teams to grind out a 31-23 win.

Ready or not, Slovis will face the vaunted Cardinal defense next. USC offensive coordinator Graham Harrell believes his freshman backup QB can handle the spotlight.

"He's got as good of an arm as I've seen," said Harrell, who once backed up Aaron Rodgers in Green Bay. "He can make any throw out there that most people can't make. We just have to do our best to get him making the right decisions every time, and if he does that, he's going to be fun to watch."

While outsiders didn't expect big things from Slovis immediately, Slovis was on a quicker timetable after he graduated from Desert Mountain High School, where Pro Football Hall of Famer Kurt Warner was his quarterbacks coach.

After fitting into the Trojans' offense immediately during spring workouts, Slovis legitimately felt he was in competition for the starting job with Daniels, an 11-game starter last year. Slovis obviously impressed his coaches when they unexpectedly named him the backup ahead of more-experienced Jack Sears and Matt Fink.

But Slovis wasn't impressed by himself.

"That was the biggest thing being named No. 2, is regaining that confidence you lost in not being named the guy," Slovis said. "But coming out here with the (starters) and getting plenty of reps, that helps."

Like most Trojans in recent years, Slovis has already had to prove he can handle upheaval.

Slovis was recruited when Tee Martin was the Trojans' offensive coordinator and Bryan Ellis was their quarterbacks coach. Slovis made his official visit after coach Clay Helton fired Martin and Ellis left for another job, and Slovis committed to USC during the 34-day window when Kliff Kingsbury was USC's new offensive coordinator and quarterbacks coach.

Harrell, who took over both jobs for Kingsbury, knew almost nothing about Slovis until spring practices began at USC. The change could be hardest on Harrell, who had planned his season around Daniels' particular skill set. Although Harrell insists that the Trojans "game-plan the same" no matter who is taking the shotgun snaps in his Air Raid offense, Slovis and Daniels have different skills and strengths.

Even if Slovis plays well against the Cardinal, the Trojans' quarterback woes aren't over. Slovis and Fink are the only scholarship QBs on the roster with nearly the entire regular season ahead of Helton, who probably needs a bounce-back season to keep his job.

Helton claims he isn't worried about putting his future in the hands of a teenager who's going to work faster than anyone imagined.

"I can always tell a quarterback by their eyes, and when his number was called (last week), there was no fooling," Helton said. "He was just like, 'I'm ready for this moment.'"