A few surprises, and a few shockers in 2019 sports 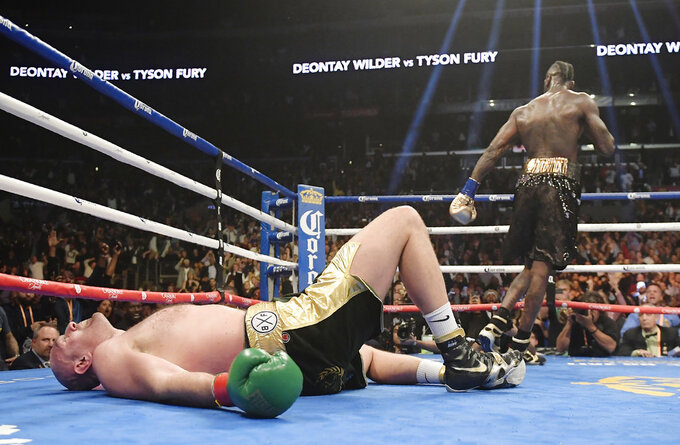 FIEL - In this Saturday, Dec. 1, 2018, file photo, Tyson Fury, of England, lies on the canvas after being knocked down by Deontay Wilder during the 12th round of a WBC heavyweight championship boxing match in Los Angeles. The bout ended in a draw. (AP Photo/Mark J. Terrill, File) 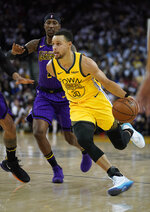 Don't worry about preparing for the shockers of 2019 because by now there's little in sports that is truly shocking. All we can really do is brace ourselves for what the new year will bring, even if it comes in unexpected ways.

GRUDGE MATCH: Oscar De La Hoya comes out of retirement at the age of 46 to meet UFC chief Dana White in a grudge match that will cost $99.95 on pay-per-view. Both fail to make weight, though, and decide to settle their differences the old fashioned way — on Twitter.

CHARLIE HUSTLE: Manny Machado signs a record contract with the New York Yankees, then declares he has changed his attitude and will run out groundballs until further notice. His vow lasts until the third game of the season in Boston when he is thrown out at first base on a line drive off the Green Monster.

RUSSIAN DOPING: Russia is welcomed back into the Olympics, but not before World Anti-Doping Officials travel to Moscow to personally apologize to President Vladimir Putin for slandering Russian athletes by calling them cheaters. WADA officials say they believe Putin when he says Russians are so genetically superior that they have no reason to dope.

TALL TALES: The NBA Finals begin in Los Angeles, where the surprising Lakers are favored to beat the Boston Celtics. ESPN's Stephen A. Smith dissects the finals for viewers, telling them the Lakers will be especially tough because Kareem is back to hitting the sky hook and Magic is an expert motivator at point guard.

FURIOUS FURY: Boxing is back and so are the big guys. Tyson Fury beats both Deontay Wilder and Anthony Joshua to become the undisputed heavyweight champion. The self-described gypsy king promptly embarks on a 50-city American tour with a band of his fellow Irish travelers in his 1988 Winnebago.

TRUMP GUY: After offering his services in a tweet to President Donald Trump, former slugger Jose Canseco is hired as the White House chief of staff in a move Trump says will juice up his administration. Canseco's first official move is to hire Dennis Rodman as assistant secretary of state in charge of coddling spoiled dictators, and the two announce a celebrity softball game in Pyongyang. Kim Jong Un beats Canseco in a home run hitting contest by hitting all 87 balls pitched to him over the fence.

CONSPIRACY TIME: Stephen Curry is surprised the Warriors are knocked off in the first round of the playoffs, though it gives him more time to sharpen his golf game and study grainy pictures of the moon landing. Meanwhile, Kyrie Irving says he's sticking to his conspiracy theory about the shape of the earth. "If the earth is really a big ball like they say, then why is the basketball court so flat?" he asks.

MASTERS MELEE: Phil Mickelson is leading the Masters on Sunday when he runs after a putt heading toward the water on No. 13 and shocks patrons by hitting it backhanded toward the hole and promptly being escorted off the grounds. Playing behind Mickelson, Tiger Woods hits three balls into the water and Patrick Reed goes on to win a second straight green jacket. Reed then declares he won't play with Woods or Mickelson in the Ryder Cup because they choke too much.

SPORTS BETTING: With sports betting spreading across the country, schools start offering elective courses on how to beat the bookies. New Jersey leads the way by requiring middle school kids know the difference between the vig and the point spread before graduating. One district offers extra credit for answering the question "Do I bet a three-teamer off the parlay sheet or on the money line?"

RAIDERS NATION: The Raiders have no place to play while their new stadium is being built in Las Vegas, and owner Mark Davis decides to play the season in London. The Brits turn Davis down, though, calling Raider fans a bunch of hooligans who would give British sports fans a bad reputation.

BRADY'S BUNCH: Tom Brady leads the Patriots to their sixth Super Bowl win with him as quarterback, then embarks on a national speaking tour with coach Bill Belichick. Brady declares he'll play until he's 50, but only if Belichick promises never to put Rob Gronkowski in as a safety again.

EIGHT IS ENOUGH: Tired of hearing complaints from fans of Central Florida — which by now is riding a 39-game winning streak — the College Football Playoff is expanded to eight teams. UCF goes on to win the national title, blowing out Alabama 42-7 in the championship game. Alabama responds by taking down Nick Saban's statue, and cutting his pay to $9 million a year.

Tim Dahlberg is a national sports columnist for The Associated Press. Write to him at tdahlberg@ap.org or http://twitter.com/timdahlberg