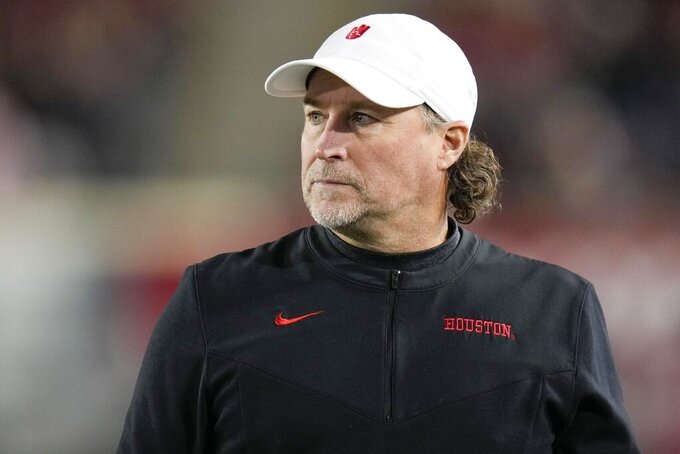 Houston coach Dana Holgorsen watches from the sideline during the second half of the team's NCAA college football game against Memphis, Friday, Nov. 19, 2021, in Houston. (AP Photo/Eric Christian Smith)

CINCINNATI (AP) — Cincinnati coach Luke Fickell won't get drawn into the debate over whether the Bearcats deserve inclusion in the College Football Playoff if they win the AAC title Saturday.

“I haven’t answered those questions. Don’t know that I would, regardless of how things went,” Fickell said Monday during a media gathering previewing the conference championship game.

Fickell typically pivots to the one-game-at-a-time-focus message he emphasizes amid the constant outside noise vying to distract his players.

If Cincinnati wins, it will stay on track to become the first team from outside the Power 5 to make the playoff.

In that regard, Cincinnati also is playing for respect, for the AAC and other second-tier teams in the so-called Group of Five.

Fickell, who is 47-14 in five seasons at Cincinnati, has the senior-laden Bearcats in the conference title game for the third consecutive season, and on the cusp of history.

He wishes he could sequester his players in the football building, remove the TVs and shut off the Internet. Keep them away from all the outside noise.

“We’re not ignorant to think that they’re going to be like me and bury their head in the sand and not listen or talk to or communicate with anybody outside of where it is you spend 90% of your time," Fickell said. “Hey, we want to enjoy what these seniors in particular have created, this buzz on our campus, in our stadium, but we can’t allow it to change us. And I’m not saying it’s easy.”

This is also the time of year the 48-year-old Fickell has to sweep aside questions about coaching vacancies, particularly the big one at Oklahoma that just came open when Lincoln Riley took the USC job. “We don't talk about individual things,” is his standard line.

Dana Holgorsen came to Houston as coach in 2019 after eight seasons at West Virginia, which had transitioned to the Big 12 during his tenure.

Cincinnati, he said, is the real deal.

“They’re deserving of where they’re ranked in the CFP,” Holgorsen said “They should be ranked higher in my opinion, based on what they've done here over the last couple of years and the quality of football they have played.”

Amid all the discussion of whether a G5 team is deserving lies some irony. Cincinnati and Houston are among the teams slated to move to a Power 5 conference — the Big 12 — within the next few seasons.

AAC commissioner Mike Aresco is philosophical about schools using the conference as a stepping stone and continues to work against the notion that it is inferior. Cincinnati's success surely has helped.

"We just embrace the fact that they’re doing all this in our conference," Aresco said. “We’re very proud of Cincinnati, we’re very proud of Houston. The one thing I will say is we hate to lose them down the road and we’re not sure that will be, but this is a celebration of what this conference has achieved over nine years.”