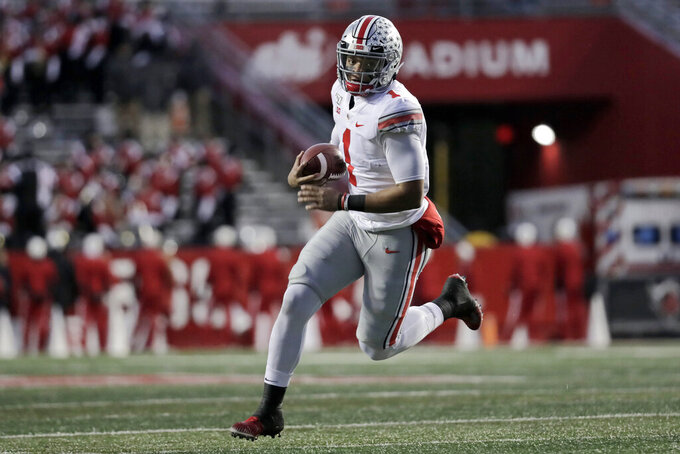 Ohio State quarterback Justin Fields runs with the ball during the first half of an NCAA college football game against Rutgers on Saturday, Nov. 16, 2019, in Piscataway, N.J. (AP Photo/Adam Hunger)

PISCATAWAY, N.J. (AP) — Fresh off another rout, Justin Fields and No. 2 Ohio State was looking ahead. Because chances are the next couple of games figure to be a bit tougher for the Buckeyes.

Fields threw for a career-high 305 yards and matched his best with four touchdown passes as Ohio State romped over Rutgers 56-21 on Saturday.

Ohio State (10-0, 7-0 Big Ten) posted its 16th straight win over the last two seasons. The Buckeyes had been outscoring opponents by over 42 points per game, the biggest margin in the nation, and were favored by 51 in this matchup.

The win keep the Buckeyes on the path toward a possible national championship with major games coming in the final two weeks of the regular season against No. 9 Penn State (9-1) and No. 14 Michigan (8-2).

Ohio State coach Ryan Day insisted his team was not complacent in beating Rutgers (2-8, 0-7) for the sixth straight time.

“I don’t think so,” Day said. “They’re good coaches and playing hard until the end. They did a good job. Again, we’re going to go through the film, but this is a sport where we’re focused on the next opponent already.”

J.K. Dobbins ran for two touchdowns for the Buckeyes and cornerback Shaun Wade set up two early TDs with an interception and a forced fumble.

Isaih Pacheco scored on a 26-yard run, Johnny Langan threw a 45-yard scoring pass to Bo Melton and ran a yard for another touchdown with 1:09 left for Rutgers. The loss was the 19th straight conference game for the Scarlet Knights, which fired coach Chris Ash in late September.

Playing just over a half, Fields finished 15 of 19 in topping his previous best of 234 yards against Florida Atlantic in the season opener. His touchdown passes covered 11 and 24 yards to Binjimen Victor, 35 yards to K.J. Hill and 14 yards to Luke Farrell on the opening series of the second half. The Georgia transfer has thrown 31 touchdowns and one interception in his first season as the Buckeyes’ starter.

Rutgers took the opening kickoff and turned the ball over twice in his first four plays from scrimmage, helping stake Ohio State to a 14-0 lead.

Wade intercepted Langan (12 of 26 for 121) on the second play from scrimmage, giving the Buckeyes the ball at their 40. Four plays later, Dobbins scored on an 18-yard run.

Wade forced receiver Isaiah Washington to fumble after a 6-yard catch on the second play of the next series and safety Jordan Fuller recovered at the Rutgers 33. Three plays later, Fields found Victor in the back of the end zone for a 14-0 lead 3:36 after the opening kickoff.

“I mean, they don't really need any help,” Campanile said of Ohio State. “I mean, they are a pretty good team and we decided to give them a lot of help to start the game.”

An 8-yard run by Dobbins pushed the lead to 21 points on the Buckeyes’ next series.

Rutgers scored after Garrett Wilson muffed a punt and Lawrence Stevens caught the ball in midair. Pacheco, who had 56 yards on 17 carries, broke through the line on a quick opener and ran 26 yards into the corner of the end zone.

Fields threw for three more touchdowns to stretch the lead to 42-7. New Jersey resident Chris Chungunov replaced him and added two more TD tosses, a 4-yarder to Jake Hausmann and a 32-yarder to Jaelen Gill.

Langan split those touchdown throws with a scoring pass to Melton late in the third quarter. His late TD run needed a lengthy review to overturn a lost fumble call.

Ohio State: Seemingly came out of the game healthy which is what it wanted with the closing stretch.

Rutgers: Not a bad effort. Scored three touchdowns against a team that had only given up eight all season. Had a goal-line stand in the second in the second quarter to force a change of possession, recovered two fumbles and even forced a couple of punts.