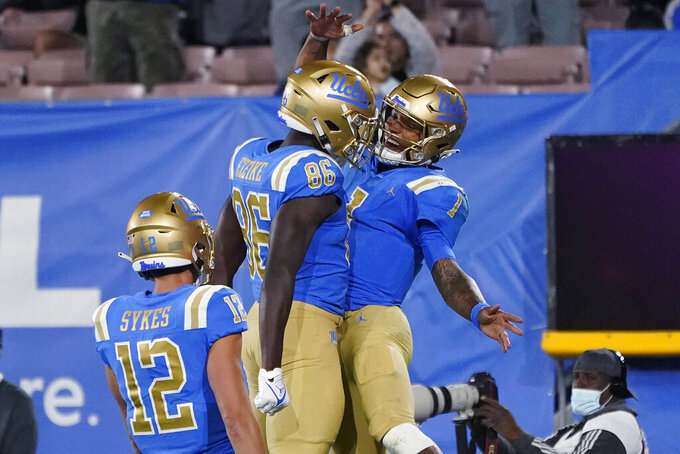 LOS ANGELES (AP) — The stakes are fairly low in the 91st Crosstown Showdown by the usual standards of Los Angeles' biggest rivalry game.

UCLA has already secured bowl eligibility for the first time under coach Chip Kelly, but the Bruins' record (6-4, 4-3 Pac-12) and their recent play aren't particularly inspiring.

Southern California (4-5, 3-4) is still mired in its season of limbo, going on two months without a permanent head coach and with a strong chance of missing out on a bowl game.

But the excitement is naturally inextinguishable when two teams separated by 13 miles of freeways meet with every player wearing their colored home jerseys. Dozens of players on both teams were high school teammates or grew up together in the sprawling Los Angeles metroplex, and the familiarity breeds anticipation, not contempt.

When the Bruins visit the Trojans at the Coliseum on Saturday, the disappointments of the current season will be overshadowed by the chance to lift the Victory Bell.

“When it comes to UCLA, man, we always have a lot of juice,” USC linebacker Drake Jackson said. "We’re ready just to get out there. ... Just let ‘em talk. See ’em when we see 'em.”

While neither team is playing for a conference title or even an outstanding season, significant stakes remain. The Bruins are hoping to play their way into an upper-tier bowl game that likely would ensure another season for Kelly, while the Trojans could desperately use this win to keep them away from one of the worst records in this West Coast powerhouse's history.

It's particularly meaningful for many UCLA players who weren't around for the Bruins' last win over the Trojans in 2018. Thompson-Robinson was a freshman then, but he barely played in that victory before losing the last two showdowns as UCLA's starter.

“It’s definitely been a game I had circled on my calendar, mainly because it’s a rivalry,” UCLA senior cornerback Qwuantrezz Knight said. "Every kid in this program looks forward to that game. It’s for everything. It’s for bragging rights. It’s for who runs the city.

USC freshman quarterback Jaxson Dart is making his first career start in place of Kedon Slovis, who beat UCLA in each of his first two shots at the rivalry. Slovis is out with a lower-leg injury that didn't heal even with extra time off last week due to the postponement of the Trojans' game at California.

Slovis twice beat the Bruins with flair, setting the single-game school record with 515 yards passing as a freshman in 2019 before throwing a last-minute TD pass to win it last year. Dart is new to the rivalry, but he gets it now.

“I really just didn't understand how intense the rivalry was,” Dart said. “Coming from Utah, I wasn't as aware of the rivalry growing up, but now I've seen it. Emotions run really high. It's for the city.”

An effective rushing attack has been a bellwether for the Bruins this season: UCLA has rushed for at least 200 yards in all six of its victories. USC’s defense is in the middle of the pack at stopping the run, but is yielding nearly 400 total yards per game.

UCLA has won just five of the last 22 editions of the Crosstown Showdown since 1999, although four of those wins happened in the past nine years. More concerningly for the Bruins, they have just one victory at the Coliseum in their last 11 visits.

USC leads the rivalry 51-32-7 overall, and the Trojans have only lost 13 times to unranked UCLA teams. The Trojans are even 6-4-1 when they come into the showdown with a record under .500.

Slovis isn't the only USC star missing this showdown: Star receiver Drake London is out for the year with a broken ankle, and the Trojans are still working on replacing his unparalleled production.

Gary Bryant Jr. stepped into the starting lineup after London went down, and Kyle Ford has stepped up. Tight end Michael Trigg also is back in practice this week after missing three games with an injury.

Whatever the Trojans do with Dart and his receivers, Kelly believes UCLA can be ready.

“The way they operate in that offense is really (they see) what you express defensively and then they counter what you’re trying to counter,” Kelly said. “If you’re going to pack the box, their system is that they’re going to throw it. But if you back off of them, you play it really, really loose, then they’re going to run it."

Dart aside, most of the USC roster has fond memories of last season's showdown. The Trojans' 43-38 victory in a thriller at an empty Rose Bowl included an exceptional individual effort on a 65-yard touchdown by London, and it was capped by Amon-Ra St. Brown's 8-yard TD catch with 16 seconds left.

“I remember that whole game vividly, man,” USC cornerback Chris Steele said. “That was definitely, definitely a great game. Probably one of my favorite games as a Trojan, so I just look forward to stacking them."