Fighting Illini splash through rain for 24-6 win at Purdue 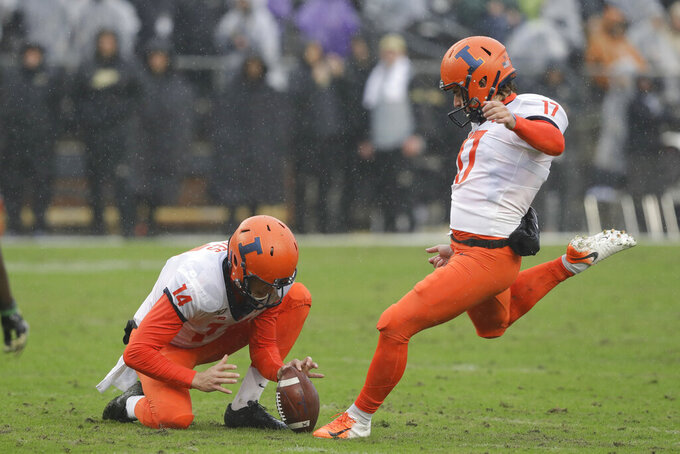 Illinois place kicker James McCourt (17) kicks a field goal out of the hold of punter Blake Hayes (14) during the first half of an NCAA college football game against the Purdue, Saturday, Oct. 26, 2019, in West Lafayette, Ind. (AP Photo/Darron Cummings) 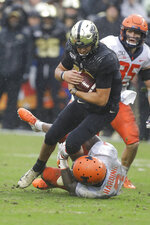 That combination helped Illinois mop up at Purdue.

On a soggy afternoon, Brown splashed his way to a career-high 131 yards rushing, Adams returned an interception 13 yards for a touchdown and Illinois pulled away for 24-6 victory to claim the Cannon Trophy for the first time since 2015.

"It's nice to leave the place a little better than we found it," Brown said. "It's such a small cannon but it's cool to celebrate and take pictures with it."

The steadily falling rain chased thousands of fans from their seats at halftime and turned the game into an ugly quagmire.

But there was no dampening this postgame celebration.

All that was missing — completing the first shutout in Smith's tenure.

Purdue avoided its first scoreless game since November 2013 by capping a 99-yard fourth-quarter drive with an 11-yard TD pass from backup quarterback Aidan O'Connell to Payne Durham. Otherwise, it was all Illini.

"I thought we'd come ready to play. I'll take the blame for that," Purdue coach Jeff Brohm said after finishing with 271 total yards. "But it was a bad performance. We got exposed in many areas and it's a bad day."

And the Boilermakers never really had a chance.

Brown's 44-yard first-quarter run set up James McCourt for a 38-yard field goal and when Adams jumped the route early in the second quarter, the Illini lead 10-0.

Brohm responded by pulling starting quarterback Jack Plummer for two series and by the time he was back on the field, Brandon Peters had made it 17-0 on a 1-yard TD plunge late in the first half.

Plummer was yanked again after losing a fumble in the third quarter and the 29-yard return Stanley Green allowed the Illini to seal it with 20-yard scoring from Reggie Corbin.

Brown needed only 10 carries in the first half to record the first 100-yard game of his career and Peters threw only six times, completing three for 26 yards.

"We didn't have to look at the past week to get ready for Purdue," Smith said. "They embarrassed us on homecoming last year. Most of our guys were there. The Cannon has been here for a lot of years."

Illinois: Smith insisted the Fighting Illini were on the verge of a breakthrough before playing No. 6 Wisconsin last week. Now they've got a signature win — and momentum. Saturday's victory was Illinois' first road win since Oct. 15, 2016 at Rutgers — and Smith's first back-to-back conference wins in his four-year tenure.

Purdue: The Boilermakers came into this season with high hopes. But a flurry of injuries derailed their season, and now they must win their final four just to become bowl eligible.

Illinois: The Illini have scored three defensive touchdowns this season. ... Peters only threw four passes in the first half with the one completion — 17 yards to Donny Navarro. ... Corbin ran 12 times for 47 yards and moved into 12th place on the school's career rushing list with 2,211.

Purdue: Zac Collins had seven punts in the first half and finished with eight. ... The Boilermakers had 44 carries for 135 yards, a 3.1 average. King Doerue had 15 carries for 37 yards. ... Freshman receiver David Bell caught five passes for 18 yards and Bryce Hopkins had five receptions for 45 yards before leaving in the fourth quarter with what appeared to be an injured right arm.

Following the game, Brohm questioned Plummer's decision-making and also the early decisions made by O'Connell.

Brohm intends to sort out that situation during practice this week. It's really the only option he has with opening day starter Elijah Sindelar still recovering from a broken left collarbone.

"We've got to be better at that position and we'll have an open competition," he said. "We'll figure it out by the end of the week."

Illinois: Will try to make it three straight when Rutgers comes to town next Saturday.

Purdue: Is seeking its second straight win over Nebraska when the Cornhuskers visit next Saturday.