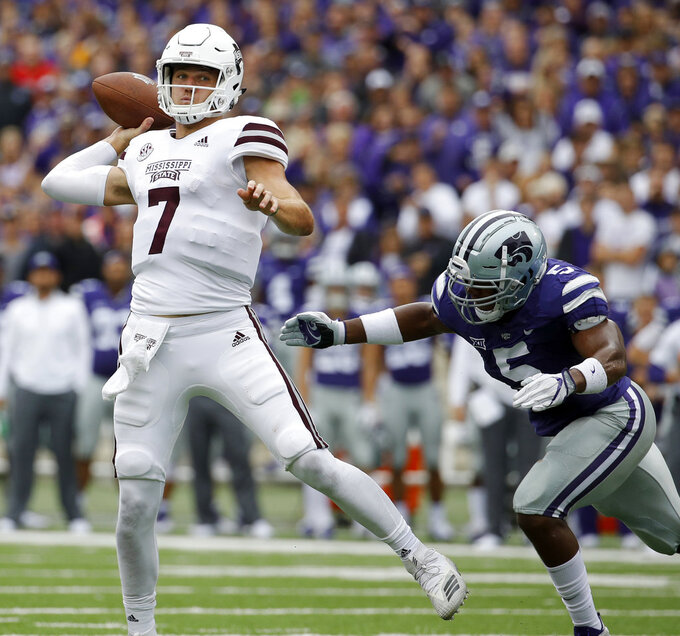 It was the first road win over a Power Five opponent for the Bulldogs (2-0) since Sept. 16, 1995, when they beat another Big 12 foe in Baylor. They had lost their last three such games.

Fitzgerald missed the Bulldogs' bowl game last year with an injury, and then was suspended for last week's blowout of Stephen F. Austin. But after getting off to a rusty start Saturday, the dual-threat QB made Kansas State (1-1) not-so-fondly recall the days of Heisman Trophy finalist Collin Klein.

Wearing the same No. 7, Fitzgerald threw for 154 yards with TD tosses to Hill and Austin Williams, as the Bulldogs shook off a sloppy, penalty-filled start to pull ahead 17-3 at halftime.

Fitzgerald then led the Bulldogs on a 95-yard march early in the third quarter to put the game away. The highlight came when Hill found a gaping hole over the right side, cut to his left and scampered 52 yards before he was finally brought down. Fitzgerald capped the drive with a touchdown toss.

He finished with 159 yards rushing as the Bulldogs piled up 372 on the ground.

Meanwhile, the Wildcats' two-quarterback system of Skylar Thompson and Alex Delton struggled to get going. Thompson was 7 of 17 for 86 yards and a touchdown while running for 34 yards, and Delton was 2 of 4 for 14 yards with an interception that led to the Bulldogs' TD late in the first half.

The bright spot for Kansas State was bruising running back Alex Barnes, who finished with 75 yards rushing. But even he was held in check by a Mississippi State defense, led by tackle Jeffrey Simmons, that had 17 tackles for loss in its opener, and then had its way with the Wildcats' veteran offensive line Saturday.

They allowed four sacks as Kansas State finished with 213 yards total offense. Their only touchdown came in the third quarter, when Fitzgerald threw an interception that set up a short field.

Mississippi State: Fitzgerald and Hill made life miserable for the Wildcats' with the read-option, essentially beating Kansas State at its own game. Fitzgerald was just 11 of 27 passing, though.

Kansas State: Despite returning all five starters on the offensive line, Kansas State struggled up front against the Bulldogs. Thompson and Delton were under constant duress, and Barnes often had to avoid first contact in the backfield. It made for a stagnant offense all afternoon.

Bulldogs safety Johnathan Abram was ejected after getting called for targeting early in the fourth quarter. Abram launched himself into a helmet-to-helmet blow on kick returner Duke Shelley.

The Bulldogs haven't done anything to hurt their poll positioning, acing their biggest test until they face Florida on Sept. 29. They have Louisiana and a trip to Kentucky the next two weeks.

Mississippi State: Louisiana heads to Starkville to face the Bulldogs next Saturday night.