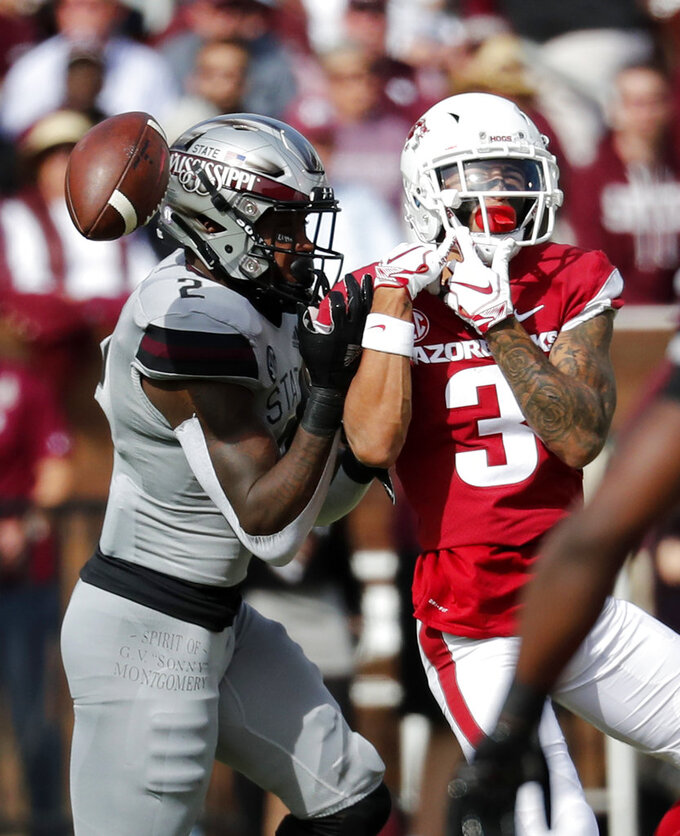 STARKVILLE, Miss. (AP) — Nick Fitzgerald barreled through a defender during the fourth quarter, crashing face-first into the ground before trotting to the sideline while removing a huge clump of grass and mud from his helmet.

Two plays later, he was back on the field. And the quarterback's 19-yard pass to Austin Williams was a fitting way to end his time playing football at Davis Wade Stadium.

Fitzgerald threw four touchdown passes and ran for another score to lead No. 25 Mississippi State over Arkansas 52-6 on Saturday. In his final home game, the 6-foot-5, 230-pound Fitzgerald had one more big performance in a career full of them.

"He's a guy that's going to play 100 percent, 100 percent of the time," Mississippi State coach Joe Moorhead said. "This sounds cliche, but he's got a bulldog spirit and a bulldog toughness to him and that shows up every time he's between the white lines."

Fitzgerald completed 9 of 14 passes for 127 yards and ran for 85 yards, including a 2-yard touchdown. He now has 3,387 career rushing yards, extending his Southeastern Conference record for rushing yards by a quarterback.

Senior Aeris Williams, starting in place of the injured Kylin Hill, added 104 yards rushing on 15 carries. Williams ran for more than 1,100 yards this season but has had a reduced role this season because of Hill's emergence as the lead running back.

Fitzgerald said having one more big game with Williams was special.

"To have a day like this with another senior, to go out there and have fun playing, putting up huge numbers in front of the home crowd for the last time, it was awesome," Fitzgerald said.

Mississippi State (7-4, 3-4 SEC, No. 21 CFP) pushed out to a 17-3 lead by halftime thanks to 166 yards rushing, including rushing touchdowns by Fitzgerald and Nick Gibson. The Bulldogs left no doubt about the outcome in the third quarter, scoring 21 points on three of Fitzgerald's touchdown passes.

Arkansas (2-9, 0-7) had some promising drives in the first half but had to settle for field goals. That wasn't enough to keep pace with the Bulldogs, who methodically beat the Razorbacks for a sixth time in seven seasons.

Arkansas' Ty Storey completed 16 of 28 passes for 137 yards and one interception. Rakeem Boyd ran for 84 yards.

"I think it started heading downhill and just no one stepped up," Storey said. "And that's as much on me as anyone."

Arkansas: After an acceptable first half, the second half proved embarrassing. Arkansas has shown flashes of improvement during Morris' first season, but this loss was a step back.

Mississippi State: The Bulldogs handled business against the worst team in the SEC. Mississippi State continues to excel on the ground and on defense. The passing game is still hit-and-miss, but Fitzgerald made good decisions, especially during the second half.

Mississippi State's defense was led by senior Johnathan Abram, who had 12 tackles, including 3½ for a loss and 1½ sacks. He leads the Bulldogs with 89 tackles this season.

Abram has had to move from safety to the team's hybrid safety/linebacker position over the past few weeks because of an injury to Jaquarius Landrews. Despite the change, he's continued to thrive.

"It just shows I can play anywhere," Abram said. "I get the chance to be around the ball a little more."

Arkansas plays at Missouri on Friday.