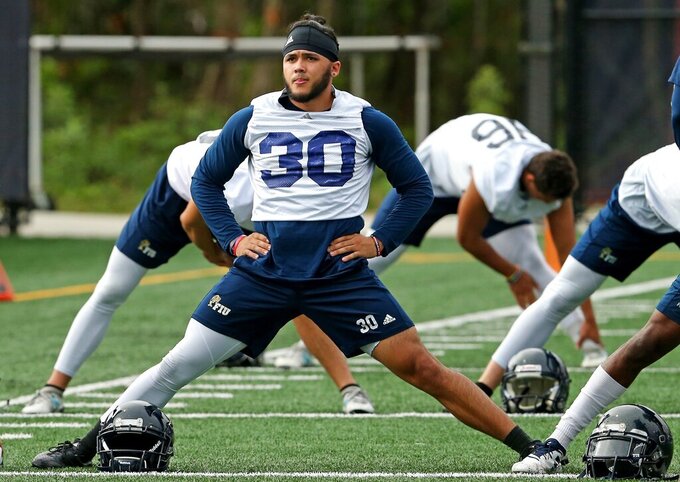 CORAL GABLES, Fla. (AP) — Jose Borregales finally was wanted by the Miami Hurricanes. Beating them was all it took.

The former FIU kicker — who played a huge role in the Panthers’ stunning upset win over the Hurricanes in November — announced in a tweet Sunday that he’s enrolling at Miami as a graduate transfer. He’ll be on campus Monday, when the Hurricanes will be able to officially confirm his arrival.

“UM has always been my dream school and still is,” Borregales said in a telephone interview. “I was raised here in Miami. I watched them play growing up. It was pretty much a straightforward decision on where I was going.”

Hundreds of players transfer each year, but Borregales' story stands out for many reasons.

Borregales made it known in his high school days that he wanted to play at Miami; the Hurricanes ignored him, so he committed to FIU in 2015 and has "had a chip on my shoulder ever since,” he said. His brother, Andres Borregales, is committed to Miami and is scheduled to be part of the school’s 2021 recruiting class.

Borregales kicked three field goals — from 29, 50 and 53 yards — in FIU’s win over the Hurricanes at Marlins Park in November. That’s not all he did that night: After one of his kicks, he put his hands together in an upside-down “U” shape, a favorite sign of disrespect by Miami opponents, and he was accused by some of making a throat-slashing gesture after a late FIU score helped put the game away.

“Let me explain this,” said Borregales, who freely acknowledges how emotional that game was and how badly he wanted to beat the Hurricanes. “My hand wasn’t on my neck. It was in front of my face mask. I was doing the slide, just spread my arms out like saying that was game, that the game was over. I did it pretty quick and it looked like I was doing the throat slash, but I really wasn’t.”

Miami doesn’t seem to have any hard feelings.

When Borregales announced that he was entering the transfer portal, plenty of schools reached out to gauge his interest. Miami slid into his direct messages; Hurricanes assistant coach and special teams coordinator Jonathan Patke simply sent him an emoji of two eyeballs to get the conversation started.

The message from Miami was clear: We see you, Jose.

Besides, kicker was a major position of need for Miami. The Hurricanes used three kickers this season, lost at least three games in large part because of kicking miscues and missed eight field goals from 40 yards or closer. Borregales, meanwhile, shook off a slow start to make 19 of his final 23 field-goal tries.

So when the Hurricanes asked, Borregales didn’t need long to make up his mind. He leaves FIU with a bachelor’s degree in recreation and sports management; at Miami, he’ll pursue a master’s degree in liberal studies.

“I went to FIU wanting to get all these records and be the best kicker that ever came out of FIU,” Borregales said. “And I did that in three years. That was something I didn’t think would happen, but it did. I didn’t have anything left to play for so I decided to transfer.”

With that, the dreams he had five or six years ago of wearing The U — not flipping it upside down — are about to become reality.

Borregales came to the U.S. from his family’s native Venezuela when he was 6, started playing football by accident when he was 9 (he liked the helmets he saw some kids wearing at a park, so his mother signed him up without knowing what football really was), was mocked by friends for abandoning soccer for the game and wasn’t even really that good at kicking until his sophomore year of high school.

And now he’s with the Hurricanes.

“Leaving FIU was one of the hardest decisions I ever made,” Borregales said. “Once you get comfortable with something or someplace, you tend not to get away from it because you don’t know what the future holds. But that was a risk I’m willing to take.”