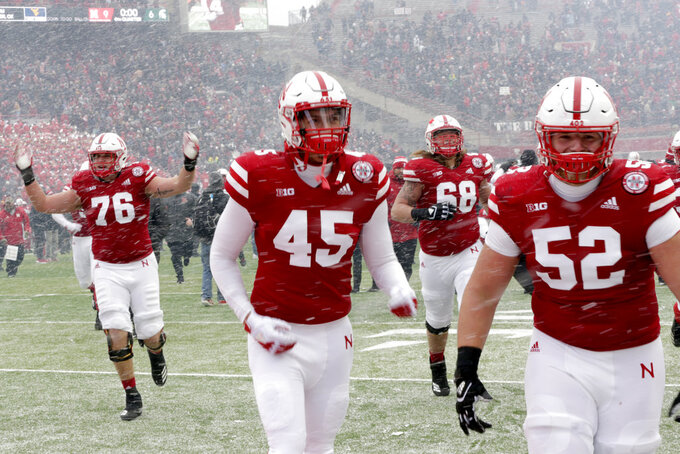 In this Nov. 17, 2018 photo, Nebraska players celebrate a 9-6 win over Michigan State in an NCAA college football game in Lincoln, Neb. Scott Frost's first Nebraska team is in position to finish with one more win than the Mike Riley-led Cornhuskers had a year ago. That would be no small accomplishment for the Huskers, who were the last power-five conference team to win this season following a program-worst 0-6 start. (AP Photo/Nati Harnik)

LINCOLN, Neb. (AP) — Scott Frost's first Nebraska team is in position to finish with one more win than the Mike Riley-led Cornhuskers had a year ago.

That would be no small accomplishment. The Huskers (4-7, 3-5 Big Ten) were the last Power-Five conference team to win this season following a program-worst 0-6 start. To close on a 5-1 run, they must win Friday at Iowa (7-4, 4-4), which has outscored Nebraska 104-44 while winning the last three meetings.

It really has been a tale of two seasons wrapped into one.

There were close losses to Colorado and Troy, the blowout loss at Michigan, a penalty-filled home loss to Purdue, a good effort that came up short at Wisconsin and the blown 10-point lead in the last five minutes at Northwestern.

Then there were wins over Minnesota and Bethune-Cookman, a close loss at top-10 Ohio State, and wins over Illinois and Michigan State.

"There were a lot of things that had to be addressed," athletic director Bill Moos said. "One of them of course, was the culture, and also our self-image. We had to embrace the new system, the new coaches, and that takes a while. In a transition period there can be doubters when you start to lose. Scott did a great job of keeping this team together and steadily improving until we got a win, which was what we needed to cure it. And then we created momentum."

With the exception of the Ohio State game, the schedule has been easier the second half of the season. The 9-6 win over Michigan State — albeit a Spartans squad missing key players to injury — was the most impressive of the season because the maligned defense stood up on a snowy day when it was tough to accomplish much on offense.

"You don't have to know a lot about football to know we're playing better the second half than the first," Frost said. "We gave ourselves chances to win games in the first half of the season. We didn't do the little things right to make them happen. We're starting to do some of those things."

Adrian Martinez is one of the top freshman quarterbacks in the nation, Devine Ozigbo has made himself into the school's first 1,000-yard rusher since 2014 and Stanley Morgan Jr. and JD Spielman are threatening or already have broken school receiving records.

The defense and special teams have been prone to errors, but both have improved late in the year.

"That's kind of the way it should be," defensive lineman Mick Stoltenberg said. "You should continue to get better. I'm really impressed that even at 0-6, guys weren't blinking. Guys were still confident, and they still wanted to win and definitely thought we'd be able to make that bowl game. The confidence in this team has continued to rise despite some early struggles."

Much of the improvement stems from how the players have taken to the new coaching staff. Under Riley, individual agendas were common, work in the weight room slacked, and there was a tendency for players to give up when times got tough.

Players say Frost emphasizes accountability on and off the field, unity of purpose and an embrace of one of the most ardent fan bases in the country.

"If you look at how much we've grown, it's not only physically and mentally but as a team and relationship-wise, getting close to each other, loving your brother, fighting for your brother," offensive lineman Tanner Farmer said. "We've grown a lot, almost immeasurably."

The way the Huskers have played the second half of the season makes Martinez wistful.

"I wish we could have been playing like this at the beginning of the year," he said. "Things would be a little bit different. But it is what it is, and we have another opportunity this week to play another good team and show people this is who we are now."