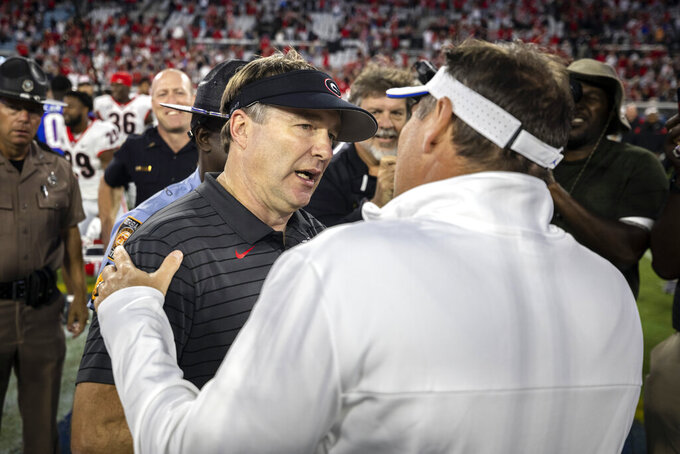 GAINESVILLE, Fla. (AP) — Dan Mullen’s strange and subpar season took another twist Monday when the Florida coach canceled media access to players and coordinators for the remainder of the week.

It came two days after a 34-7 drubbing to rival Georgia in nearby Jacksonville, the program’s seventh loss in its last nine games against Power Five opponents.

Mullen seemed frustrated earlier Monday as he shot down a question about recruiting during a 12 1/2-minute media session that was described by school officials as being fit into a “tight window.”

“We’re in the season right now,” said Mullen, who can’t be on the road recruiting because of NCAA sanctions that included a one-year, show-cause penalty. “We’ll do recruiting after the season. When it gets to recruiting time, we can talk about recruiting.”

It's become a sore subject for Mullen and a hot topic for Florida fans. Georgia has signed a higher-ranked class every year since 2014, waves of talent that include 26 more five-star recruits than the Gators have landed.

Georgia coach Kirby Smart, either intentionally or inadvertently, took a shot at Mullen and the Gators following Saturday’s game.

“There’s no coach out there that can outcoach recruiting,” Smart said. “I don’t care who you are. The best coach to ever play the game better be a good recruiter because no coaching is going to out-coach players."

Smart was just getting started, too.

“It’s 25% evaluation, that’s 50% recruiting and another 25% is going to be coaching,” he added. “But if you don’t recruit guys, you got no chance. Just go look at the best teams out there. They got good football players. And that’s the reason I believe in recruiting and I believe you better always be recruiting because, if you’re not, somebody else is.”

Florida has other issues, none more concerning than 16 turnovers in eight games, but a lack of talent and depth would be close to the top of the list.

Still, the Gators (4-4, 2-4 Southeastern Conference) were a couple plays away from winning close games against then-No. 1 Alabama, Kentucky and LSU.

“We have to live in the reality world, not in the perception world,” Mullen said. “The noise is kind of the perception on the outside, a lot of it. We live with our guys, which is focused in on how we got to get better, what we did well, what we did poorly.

"You forget these guys are 18-, 19-, 20-year-old kids, a lot of them, so they’re on social media all the time. … I pay enough (attention) that I know what our guys will have to deal with, but then we get back to the reality. ‘Hey, here’s things we did well. Here’s things we did poorly. Here’s areas we need to improve in.’ We kind of live in that world to address things.”

The Gators play at South Carolina (4-4, 1-4) on Saturday, the first of four consecutive games in which Mullen’s team should be double-digit favorites. Florida already is an 18½-point favorite against the Gamecocks, according to FanDuel Sportsbook.

The closing stretch to the regular season also includes games against Samford (3-5), Missouri (4-4) and Florida State (3-5). Winning all four could help Mullen change the narrative.

“It’s six inches from a pat on the back and a kick in the rear,” Mullen said. “In the SEC, you’re either getting one or the other. There’s no in-between. There’s no, ‘I guess everything’s OK.’ That’s why I say the perception and the reality. The perception is everything’s perfect or everything’s horrendous. Reality, we’re probably more in the middle somewhere and you’re just trying to figure out how to improve and get better.