Florida hosts Kentucky, hopes to prove opener was no fluke 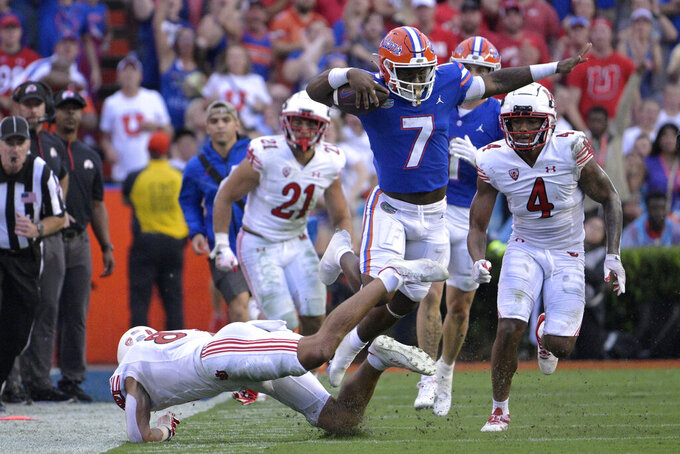 Line: Florida by 5 1/2, according to FanDuel Sportsbook.

Series record: Florida leads 53-19, although the teams have split the last four meetings.

Florida vaulted to No. 12 in the AP Top 25 poll following a 29-26 victory over seventh-ranked Utah in the Swamp. Now the Gators will try to prove it wasn’t a fluke when they open Southeastern Conference play against Kentucky, which has made the series competitive in recent years after decades of lopsided outcomes.

Kentucky’s offensive line versus Florida’s defensive front. The Wildcats allowed four sacks at home last week against Miami (Ohio) and will now have to deal with crowd noise from the 90,000-plus expected on hand in the sold-out Swamp. The Gators failed to sack Utah QB Cam Rising but managed steady pressure up the middle.

Kentucky: QB Will Levis had a solid opener. He completed 21 of 32 passes for 303 yards, with three touchdowns and an interception in a 37-13 victory. He also showed an immediate rapport with WR Tayvion Robinson, a Virginia Tech transfer who had six receptions for 136 yards in his Wildcats debut.

Florida: QB Anthony Richardson was as good as advertised in his second career start. He ran for 106 yards and three touchdowns, including the go-ahead score in the final minutes, and completed 17 of 24 passes for 168 yards. His best play was a 2-point conversion in which he pump-faked one defender and spun around another before throwing a strike in the back of the end zone.

Florida is 20-1 against Kentucky in Gainesville since 1981. The lone loss came in 2018, when the Cats ended a 31-game skid in the series. … Kentucky is expected to be without Chris Rodriguez, the team’s leading rusher last season, for a second straight game. LB Jordan Wright also could be sidelined again. … Florida’s Billy Napier can become the second coach in school history to open the season with consecutive wins against ranked teams. The other to accomplish the feat was Charley Pell, whose Gators knocked off No. 15 Miami and 10th-ranked Southern California to start the 1982 season.