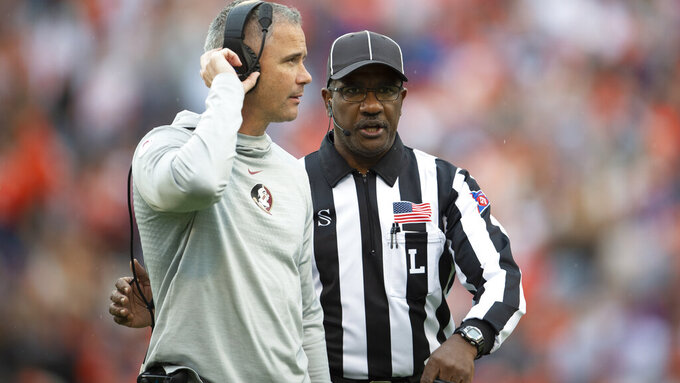 TALLAHASSEE, Fla. (AP) — North Carolina State isn’t in the driver’s seat in the Atlantic Division but the Wolfpack know they control their own destiny and that the road ahead includes matchups that will put them in position to claim their first football division title in the Atlantic Coast Conference.

It starts with Saturday's night matchup against Florida State.

“It definitely feels nice to be in the hunt,” offensive tackle Ikem Ekwonu said. “I know Coach (Dave) Doeren has said something that it’s been a while since N.C. State has been in this position. It definitely means a lot and it’s definitely nice that we have a lot of control over how we finish the season.

“I feel like that’s the biggest thing for me. It’s not really up to any other people. We don’t have to rely on any other teams to win out or anything like that.”

N.C. State (6-2, 3-1 ACC) lost at Miami on Oct. 23 to fall out of the Top 25, but the Wolfpack rebounded with last week’s home win against Louisville. North Carolina State has never represented the Atlantic Division in the championship game since the ACC began the two-division format in 2005.

But the Wolfpack can't afford to get ahead of themselves and look past Florida State (3-5, 2-3).

The Seminoles are coming off a 30-20 loss at Clemson last week and is holding on to its slim hopes of reaching a bowl after missing out following the 2020 season. It's been wild ride for Florida State — from an 0-4 September to three straight October wins before falling at Clemson.

“It was a challenging first month but we got up,” Florida State coach Mike Norvell said. “We responded. We pushed forward. There were four weeks of positive momentum, a lot of things we’re growing and building upon. Saturday, we got knocked down again.

“The only sin is if you stay down on that ground. We’re going to jump up and move forward.”

Some other things to watch when NC State travels to Florida State:

Wolfpack quarterback Devin Leary has flown under the radar a bit with Wake Forest’s Sam Hartman and North Carolina’s Sam Howell putting up big numbers at other in-state programs.

“Protecting the football is the best way to win, period,” Wolfpack coach Dave Doeren said. “When your quarterback is doing what ours is from that standpoint, he’s giving us the best chance to win, not just because of his arm or his accuracy — because he doesn’t help the other team.”

Florida State is down to three scholarship quarterbacks after redshirt freshman Chubba Purdy announced Wednesday he intends to transfer. The Seminoles have Jordan Travis and McKenzie Milton, who have both started games this fall, as well as redshirt freshman Tate Rodemaker.

The game marks a homecoming of sorts for Wolfpack defensive tackle Cory Durden, a graduate transfer who played the previous three seasons at Florida State and started 15 games.

“Just with the mindset of this team that we have, I can’t get caught up in the emotional stuff,” Durden said. “I have to just play disciplined football and be the best (teammate) I can be so that we can win. Ultimately that’s the goal. It’s well beyond Cory versus Florida State.”

“We never really worry about situations just because we know when we go out to practice, we completely trust in our coaches 100%,” safety Tanner Ingle said. “We know whatever they give us, whatever their plan is, we believe in it.”

Defensive end Jermaine Johnson, a graduate transfer from Georgia, has brought production and energy to the Seminoles’ front four. Johnson leads the ACC with eight sacks and 11 tackles for loss, the most for a Florida State player since Brian Burns had 10 sacks and 15.5 tackles for loss in 2018.