Florida State looks for breakthrough win vs No. 2 Clemson 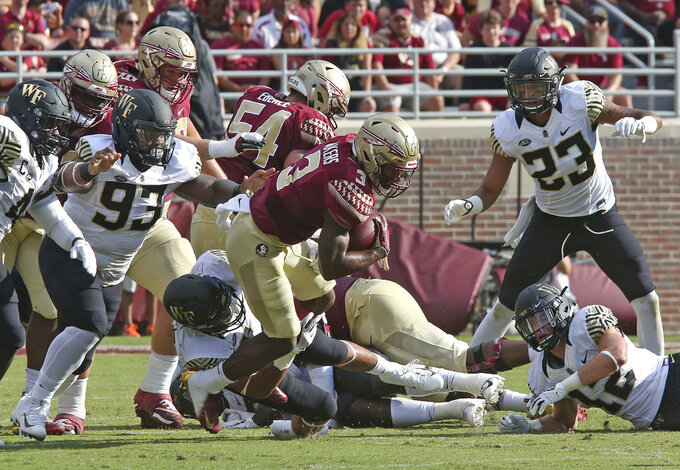 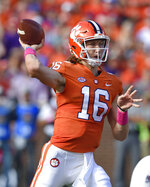 Florida State tailback Cam Akers thinks the Seminoles might finally have found their footing this season. They'll surely need it with No. 2 Clemson in Tallahassee.

Florida State (4-3, 2-3 Atlantic Coast Conference) has won three of its past four games after a dreadful start under first-year coach Willie Taggart that had some fans wondering if another dark, freefall was ahead for the former powerhouse program.

Akers said his team's 38-17 win over Wake Forest last week was a breakthrough for him after a two-touchdown performance — one of them on a 58-yard burst.

"It just makes me want more," Akers said. "A weight has been lifted off my shoulders. I don't want to stop there."

Akers will have his hands full, though, to keep that going.

Clemson enters fourth in the ACC in rushing yards allowed at 107 a game. It has permitted just six rushing TDs, just one off the fewest in league.

"We've just got to turn it up a notch," Florida State quarterback Deondre Francois said. "We know they're going to come ready to play. We know they've got one of the best (defensive lines) in the country, if not the best in the country. So we've got to prepare like that."

The Tigers hope to keep doing what they've done much of the season. They come off their most dominating performance so far, a 41-7 pummeling of No. 22 North Carolina State in what was billed as a tight showdown between the ACC's last two undefeated teams.

"I think we're in a really good spot for this stage," Clemson coach Dabo Swinney said.

The Tigers enter with the ACC's top rusher in Travis Etienne, who has rushed for three touchdowns in each of their past three games. Etienne has 14 rushing TDs this season, which is tied for most in the FBS with Florida Atlantic's Devin Singletary.

Some other things to watch when No. 2 Clemson plays at Florida State:

Tigers coach Dabo Swinney drove home the point all week that despite Florida State's early struggles, the Seminoles are dangerous, talented and capable of playing with the Tigers. He also made sure his players knew Clemson had never won two straight games at Florida State. "That's something we've thought about," Clemson defensive tackle Christian Wilkins said.

Clemson quarterback Trevor Lawrence looked poised and polished in leading the Tigers to the win over North Carolina State. Lawrence, the long-haired, strong-armed freshman, threw for a career best 308 yards in his third college start. Lawrence expects to build on that showing at Florida State.

Florida State quarterback Deondre Francois recalled the shootout with Clemson two years ago where the Tigers rallied for a 37-34 victory. The Seminoles had a chance to answer after Clemson's go-ahead TD with 2:06 to go, but Francois said the team made too many mistakes and couldn't execute on the final drive. "That just keeps replaying in my head," he said.

Clemson coach Dabo Swinney brushed off talk that Doak S. Campbell Stadium will be half-filled and dull because of an expected Tiger blowout. "This is Clemson-Florida State," he said. "I know there will be a really good crowd. I'll be very surprised if there's not."

The once lopsided series with Florida State and Clemson is turning in the Tigers favor. The Seminoles had won 11 straight in the series after joining the ACC. Clemson, though, has won eight of 15 meetings between 2003 and 2017. A win Saturday would be Clemson's fourth straight over FSU, a first for the Tigers.