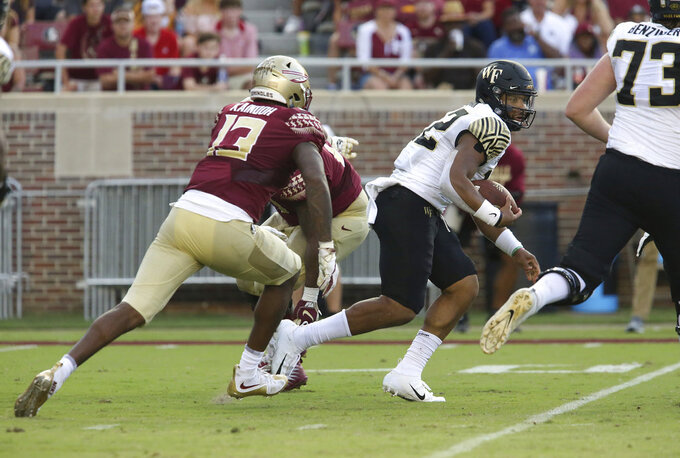 TALLAHASSEE, Fla. (AP) — Cam Akers hasn't had much to smile about a year after rushing for 1,000 yards. Florida State's offensive line hasn't been able to open up as many rushing lanes and the sophomore has struggled.

That changed on Saturday.

Akers had two touchdown runs, including a 58-yarder, and Deondre Francois threw for a season-high 353 yards as Florida State bounced back from a sloppy start and scored 38 straight points in a 38-17 win over Wake Forest on Saturday.

The 5-foot-11, 210-pound Akers had 98 yards on 13 carries for Florida State (4-3, 2-3 Atlantic Coast Conference) in what was the best rushing day this season for the team. The Seminoles also set season highs for points scored and offensive yards (485).

Francois completed 29 of 40 passes and had two touchdown passes, including a 33-yard scoring toss to Nyqwan Murray on fourth down. Francois connected with 11 receivers and had his eighth career 300-yard game in 21 starts.

Murray caught eight passes for 131 yards, both of which are season highs.

Sam Hartman completed 22 of 46 passes for 227 yards for Wake Forest (3-4, 0-3), which ran 104 plays — the most ever against Florida State. Hartman hooked up with Jack Freudenthal on a 9-yard touchdown pass to put Wake Forest ahead 10-0, but the Demon Deacons didn't score on their next 11 drives until a touchdown drive in the game's final six minutes.

"We're not where we want to be," Wake Forest coach Dave Clawson said. "This is not where I thought we'd be, but it is what it is and you have to make the best of it. All of these young kids getting reps are going to start getting better."

Brian Burns and Joshua Kaindoh had two of Florida State's five sacks. The Seminoles now have 24 sacks this season.

Burns, who has nine sacks, changed the momentum of the game with a sack of Hartman on fourth-and-8 in the first quarter. Trailing 10-0, Florida State marched 60 yards to score its first touchdown — and the first of the 38 unanswered points.

"For the most part we did a pretty good job up front," Florida State coach Willie Taggart said.

A GOOD MOMENT AT A ROUGH TIME

Janarius Robinson and his mom, Cherine Duncan, lost their home in Panama City, Florida, when Hurricane Michael struck on Oct. 10. Robinson, a sophomore defensive end, had six tackles and a tackle for loss against Wake Forest.

"It felt pretty good to go out there and relieve some pressure, you know I've been down all week about losing my house," Robinson said. "But coming out there, forgetting everything and just playing to the best of my abilities for my teammates means a lot."

Florida State's compliance office appealed for a waiver on Robinson's behalf so that he could start a fundraiser on GoFundMe to rebuild his home. More than 1,800 people have contributed $102,000, exceeding Robinson's goal of $75,000.

"It means a lot to me and my family and my mother," Robinson said. "Thank you all."

Wake Forest played much of Saturday's game with just one scholarship linebacker after beginning the season with seven. Injuries have crushed the depth of the unit, with three linebackers out for the season.

The Demon Deacons' only scholarship linebacker, Justin Strnad, had 12 tackles to lead a patched-up group. Free safety Luke Masterson moved up to linebacker and had five tackles against Florida State.

"I've just never been through anything like this in 19 years of being a head coach that you get that cleared out at one position," Clawson said. "We are paper thin. We're just running out of bodies. We may have to move Luke to linebacker for the rest of the year."

Florida State held Wake Forest to 94 yards on 48 carries, an average of 1.9 yards per carry. The Seminoles entered the game with the No. 8 rush defense in the FBS, allowing just 101.2 yards per game.

Wake Forest: A letdown after Wake had the Seminoles on the ropes 10-0 in the first quarter. It was another frustrating performance by the Demon Deacons' injury-depleted defense, which had allowed 36.8 points per game coming into Saturday.

Wake Forest: The Demon Deacons will play at Louisville on Saturday.

Florida State: The Seminoles will play host to Clemson on Saturday.