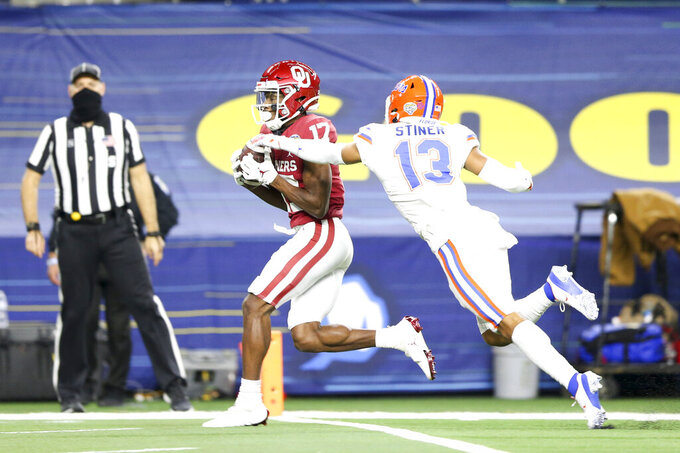 Oklahoma wide receiver Marvin Mims (17) catches a touchdown while being defended by Florida defensive back Donovan Stiner (13) during the Goodyear Cotton Bowl between Oklahoma and Florida at AT&T Stadium in Arlington, Texas on Wednesday, Dec. 30, 2020.(Ian Maule/Tulsa World via AP)

“His track record of preparing players for the NFL and his success coaching at every level speaks for itself," Mullen said in a statement. "His energy and tireless effort in recruiting will be an asset to our defensive staff.”

McGriff spent the last two seasons as defensive backs coach at Auburn. Before that, he was defensive coordinator at Mississippi (2016-18).

Florida surrendered 52 and 55 points, respectively, in consecutive losses to top-ranked Alabama and No. 8 Oklahoma to close out the year. The Sooners racked up a whopping 684 yards — the most any team has ever gained against Florida — in the Cotton Bowl. Florida’s previous high was 629 yards in a 62-24 loss to Nebraska in the 1996 Fiesta Bowl.

It was the third time this season that Florida’s porous defense surrendered more than 600 yards. The unit allowed 613 in the opener at Ole Miss and 605 to the Crimson Tide in the Southeastern Conference championship game.

The defense yielded 35 or more points in half of its 12 games, twice as many times as it did during defensive coordinator Todd Grantham’s first two seasons in Gainesville. The unit ended with consecutive 50-point outings, the first time Florida had done that in back-to-back games since 1917.