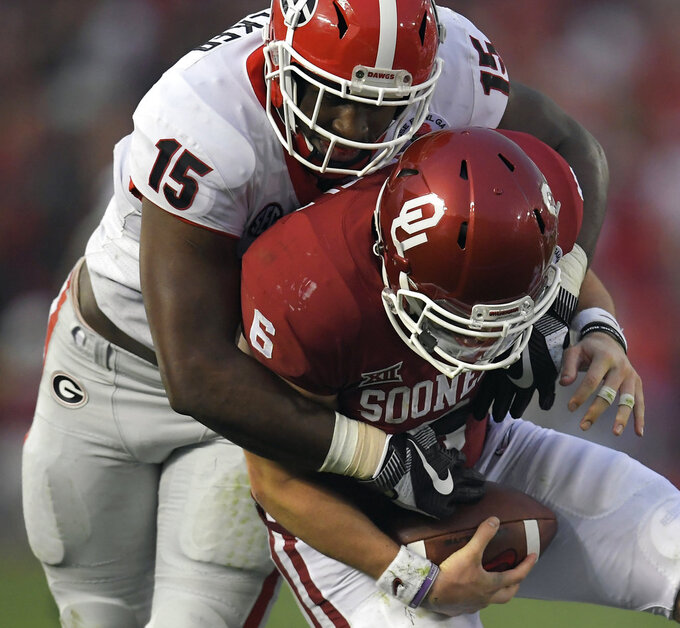 FILE - In this Jan. 1, 2018, file photo, Oklahoma quarterback Baker Mayfield (6) is sacked by Georgia linebacker D'Andre Walker (15), during the second half of the Rose Bowl NCAA college football game in Pasadena, Calif. Walker, a senior linebacker, has five of the team’s nine sacks and a team-high 10 quarterback hurries. (AP Photo/Mark J. Terrill, File)

Florida's Jachai Polite and Georgia's D'Andre Walker are two of the most disruptive defenders in the Southeastern Conference. Polite, a junior defensive end, has seven sacks in as many games and at least one in each of the last five. Walker, a senior linebacker, has five of the team's nine sacks and a team-high 10 quarterback hurries.

Keeping them at bay is among the top priorities for both offenses heading into Saturday's rivalry game between the No. 9 Gators (6-1, 4-1 SEC) and the seventh-ranked Bulldogs (6-1, 4-1).

"It's the SEC, so every week there's going to be great rushers, great defensive linemen, especially in the box," Bulldogs offensive tackle Andrew Thomas said. "Everyone is pretty good. It's going to be a challenge for us on our pass protection, but we're going to work on it and we'll be good on Saturday."

The Gators rank third in the league with 21 sacks, trailing Alabama and Auburn. Defensive end Jabari Zuniga has 4 1/2, and linebacker Vosean Joseph has three. Polite is the best of the bunch, widely projected to be an early round pick in the 2019 NFL draft.

"They're extremely athletic. They're quick. They have caused problems for everybody that they have played with their athleticism," Georgia coach Kirby Smart said. "They are hard to block. They stay active. Even when you block them, they get in on plays.

"You can't put two people on all of them. You have to try to block those guys and get hands on them. They do a good job of changing stunts, moving fronts, stemming things and are really effective, especially on third down."

Georgia has been mostly solid protecting quarterback Jake Fromm, allowing 11 sacks. Seven of those came on third down, which is Polite's specialty.

The 6-foot-2, 242-pound Daytona Beach native has the kind of speed that keeps offensive tackles awake at night and the kind of balance and body lean that excite NFL scouts and general managers.

Playing at the next level is so much part of Polite's goals that he sort of included it in his Twitter handle: RetireMoms.

"Just to retire my mom," he said. "I don't want her to work, just having money for her so she doesn't have to work."

Polite is well on his way to becoming a millionaire. He bought into new strength and conditioning coordinator Nick Savage's program, allowing him to shed weight, build muscle and get faster and stronger. And he's getting closer to becoming an three-down player for the Gators.

"He's really working to become a set-the-edge guy, to become more stout and be able to play all three downs," Florida defensive coordinator Todd Grantham said. "The biggest thing he gives you is the luxury of being able to win one-on-one matchups."

Walker has done the same for Georgia — and without nearly as much help from teammates.

The 6-foot-3, 245-pound Fairburn, Georgia native has made strides every year he's been on campus. He finished with 13 ½ tackles for loss, including 5 ½ sacks, as a junior but has stepped up his game in his final year.

Now, he faces a Florida line that was shaky early in the season and much more stable of late.

"I think D'Andre has grown into this role," Smart said. "He's a very motivated kid. He plays so hard. It's important to him. He still has room for improvement. ... He's a tough, good football player that probably a lot of people overlooked throughout his career because he's behind other guys."

It's unlikely anyone will ignore Polite and Walker on Saturday.