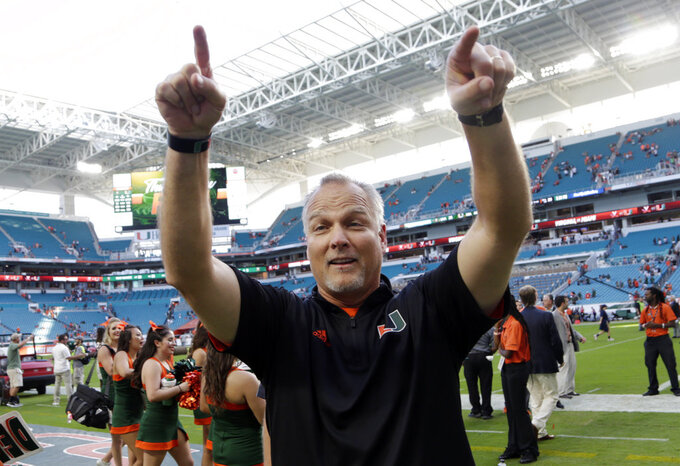 FILE - In this Nov. 18, 2017, file photo, Miami head coach Mark Richt walks off the field after an NCAA college football game against Virginia in Miami Gardens, Fla. Virginia led 28-14 early in the third quarter at Miami a year ago, but two touchdowns, one defensive, in a span of seven seconds pulled the Hurricanes even, and they scored the last 30 points in a 44-28 victory. The Two schools meet on Saturday. (AP Photo/Lynne Sladky, File)

Doug Flutie is returning to Boston College this week, along with plenty of his teammates for a celebration that will surely bring back memories of the Eagles' dramatic "Hail Flutie" win over Miami in 1984.

The reminder won't be pleasant for the Hurricanes.

But it's another return that could be a bigger problem.

Boston College (5-2, 2-1 Atlantic Coast Conference) expects to get running back AJ Dillon back for the first time in nearly a month, and he'll likely be a big part of the Eagles' plans when they play host to the Hurricanes (5-2, 2-1) on Friday night. Dillon has missed the last two Boston College games with an ankle injury.

"We're hitting our stride a little bit again," Boston College coach Steve Addazio said. "Give the credit to our players. We get AJ back and I think he'll continue to improve each week, but hopefully we get back to full strength."

Since becoming the starter last October, Dillon has averaged 159 rushing yards a game. He'll be facing a Miami defense that has allowed only 106 yards per game this season.

"We're going to play against a super defense, there's no doubt about that," Addazio said. "My concern is that they do get a lot of turnovers because they're talented players. It's a good-looking defense, good-looking football team."

It's a critical game for both teams,

both of which are coming off a bye week.

While neither will be eliminated from the ACC race with a loss, whichever team gets beaten on Friday night will see their hopes of reaching the conference championship game take an enormous hit.

"I hear Doug Flutie is on the way if he's not already in town," Miami coach Mark Richt said. "There will be a lot of things that will get those guys revved up and ready to go. We'll have to make sure we're ready as well."

Here are some other things to know going into this matchup:

This is the most emotionally significant game of Boston College's season. It's the annual "Red Bandana" game, the one that pays tribute to Boston College graduate and lacrosse player Welles Crowther, one of the victims of the terrorist attacks at the World Trade Center on Sept. 11, 2001. Crowther is credited with saving at least a dozen lives that day, with people telling the story of how a man wearing a red bandana — Crowther's signature — helped them escape before the towers fell. Crowther's body was found six months after the attacks, in the rubble of the South Tower.

It's rare to see a Miami team start 5-2 and not have a spot in the AP poll. Over the last 40 years, there have been nine previous instances of the Hurricanes winning exactly five of their first seven contests — yet this is only the second time that didn't merit Miami being ranked. The other was in 2006.

Miami quarterback Malik Rosier is 5-1 in his road starts (excluding neutral-site games), and has thrown at least two touchdown passes in all six of those games. He's also averaged 16 yards per completion in those contests, with 14 touchdowns (plus four more rushing) against four interceptions. The Hurricanes plan to use N'Kosi Perry, who started Miami's three most recent games after temporarily taking the first-string job from Rosier, on Friday night as well.

Due respect to the Eagles, another Boston team might pull the attention of a few fans Friday night. This game is going up against Game 3 of the World Series, with the Boston Red Sox — managed by University of Miami Sports Hall of Fame member Alex Cora — looking to take a 3-0 lead over the Los Angeles Dodgers.

The Hurricanes lead the all-time series 24-5, but this is the first Miami-Boston College matchup since 2012 — and they're not slated to play again until the Eagles visit the Hurricanes in 2023. The teams met 13 times in a 14-year span from 1990 through 2003, during the Big East days, but meet only sporadically now that they're in opposite divisions of the ACC.