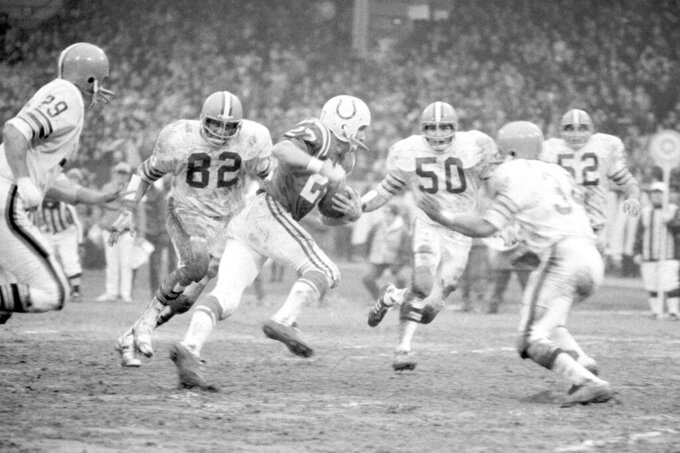 FILE - In this Dec. 26, 1971, file photo, Baltimore wide receiver Ray Perkins is surrounded by Cleveland Browns defenders including Jim Houston (82) and John Garlington (50) after picking up 13-yards in the second half of the AFC Championship game in Cleveland. Perkins, who replaced Hall of Famer Bear Bryant as Alabama’s football coach and started the transition with the New York Giants that led to two Super Bowl titles, died Wednesday morning, Dec. 9, 2020, in Tuscaloosa. He was 79. The school announced his passing on Wednesday, and daughter Rachael Perkins posted news of his death on her Facebook page. (AP Photo/File)

TUSCALOOSA, Ala. (AP) — Ray Perkins, the former Alabama receiver who replaced Bear Bryant as Crimson Tide's coach and started the transition with the New York Giants that led to two Super Bowl titles, died Wednesday in Tuscaloosa. He was 79.

The school announced the death Wednesday, and daughter Rachael Perkins posted the news on her Facebook page. No other details were immediately available.

“He served the University of Alabama with great class and integrity,” Crimson Tide coach Nick Saban said on the Southeastern Conference coaches teleconference. “He was a great coach and had a tremendous impact on the game, and he was a really, really good person and a really good friend.”

Perkins left a head coaching job with the NFL’s Giants to replace Bryant following the 1982 season. It was a dream job for the former Crimson Tide star receiver.

Perkins won three bowl games at Alabama and was 32-15-1, but he also went 5-6 in 1984. It was the program’s first losing season since 1957, the year before the school hired Bryant. He also served as athletic director during that period.

“I think he probably handled the circumstance of the situation he was in taking over for coach Bryant as well as anybody in the world could," Saban said after practice Wednesday. "And I think it takes strong leadership and great conviction in terms of what you believe in and what you want to do to make a situation like that work very favorable. He had lots of success where ever he was.

“He was always one of the most well respected people in our profession.”

An All-America receiver at Alabama in 1966, Perkins played professionally for the Baltimore Colts from 1967-71.

“We are deeply saddened to hear of the passing of coach Perkins,” Alabama athletic director Greg Byrne said. “Just a year ago we were celebrating him as our SEC Football Legend in Atlanta, an honor he was truly deserving of."

While he had only a 23-34 regular-season mark with the Giants, he started a turnaround for the organization before leaving. In 1981, Perkins led the team to its first postseason berth since 1963. New York upset the defending NFC champion Eagles in the NFC wild-card game before losing in the divisional round to a San Francisco 49ers team that went on to win the Super Bowl.

Perkins had been offensive coordinator with the San Diego Chargers before joining the Giants. He was then-general manager George Young's first major hire and the two upgraded the roster and installed discipline.

“I remember George saying, ‘He will make it very uncomfortable for our players to lose," Giants co-owner John Mara said Wednesday. “Ray did a good job for us and got us into the playoffs in 1981 for the first time in many years. During the 1982 season, which was shortened due to a players strike, he announced he was leaving at the end of the year to go to Alabama, which he described as his dream job.”

Bill Parcells replaced Perkins and inherited a team that had Lawrence Taylor, Phil Simms and Harry Carson. It went on to win Super Bowls after the 1986 and '90 seasons.

“I always wondered whether he later regretted that decision,” Mara said about Perkins' return to Alabama. "But he certainly left our team in much better shape than he found it in, including having Bill Parcells and Bill Belichick on his staff.”

“I loved Ray and he was a very close friend of mine,” Parcells said Wednesday. “I was very saddened by the news. He’s the only reason I was in pro football; he’s the one who brought me into the league. He was my friend. I worked for him at the Giants and then he worked for me at the Patriots. He was a great guy.”

Perkins also was the head coach of the Tampa Bay Buccaneers from 1987-90. He later spent one season leading the Arkansas State program before working as an assistant for several NFL teams.