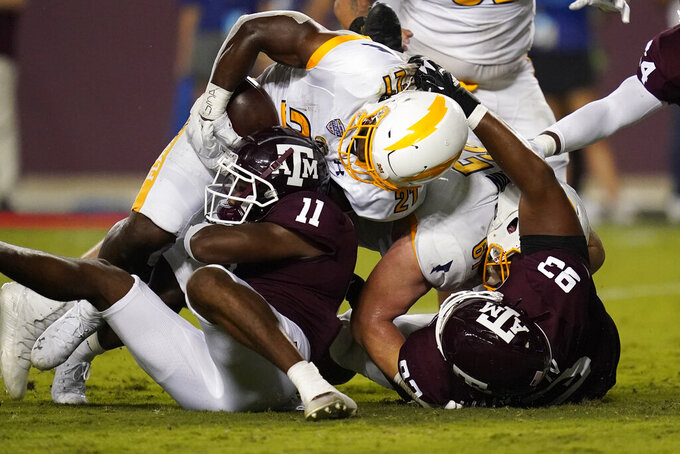 Kent State running back Joachim Bangda (21) is stopped short of the goal line by Texas A&M defensive back Deuce Harmon (11) and defensive lineman Dallas Walker IV (93) during the second half of an NCAA college football game on Saturday, Sept. 4, 2021, in College Station, Texas. (AP Photo/Sam Craft)

The Aggies are now in the Southeastern Conference, where they’re a national title contender. The Buffaloes reside in the Pac-12, where they’re searching for national attention.

This could be that kind of stage when Colorado faces No. 5 Texas A&M on Saturday at Empower Field, home of the Denver Broncos. The Buffaloes are looking for their first win over a top-five team since 2007.

“Biggest thing for us is just to treat it as like a game that will put us back on the map and this program back to where it used to be,” Colorado linebacker Nate Landman said.

This season, the Aggies are fully embracing the pressure that comes with being a highly ranked team. They went 9-1 a season ago, which culminated with a win over North Carolina in the Orange Bowl. Their only loss was to Alabama in the second game.

“Our whole mentality this year — to dominate,” said Texas A&M defensive back Demani Richardson, whose team beat Kent State 41-10 in the season opener. “I know that last year, that was part of the problem, why we didn’t get into the playoffs, because we didn’t dominate enough. So I just feel like we need to dominate.”

To take the next step, Aggies coach Jimbo Fisher said, doesn’t involve anything out of the ordinary.

This could be a measuring stick for where the Buffaloes are in the second year under coach Karl Dorrell. The last time the Buffaloes (1-0) beat a team in the top five was when they knocked off No. 3 Oklahoma 27-24 in Boulder on Sept. 29, 2007. They're 4-34 against ranked teams dating to 2009, according to the team.

“Great opportunity,” said Dorrell, whose team beat FCS team Northern Colorado 35-7 last week. “We’re embracing the challenge of what this is going to be.”

The trio of tailbacks Isaiah Spiller and Devon Achane and receiver Ainias Smith are off to another blazing start. Achane rushed for 124 yards and two scores against Kent State, while Spiller had 113 yards rushing. Smith caught eight passes for 100 yards and two scores.

“They are a great offense,” Landman said. “We’re a great defense."

Texas A&M is seeking its second win in the state of Colorado. The Aggies knocked off the Buffs 16-10 in Boulder on their way to the Big 12 South crown in 1997.

“Coach Dorrell is a really good coach, he’s been around a long time in pro ball, college ball," Fisher said. "They do a really good job with pro schemes on offense. Defensively, they bring multiple blitzes, multiple fronts.

“We need to keep building our identity.”

The distance from Folsom Field to Empower Field is less than 30 miles. The Buffaloes are 55-35-3 while playing in Denver. It takes on even more meaning being in the stadium of the Broncos.

“Probably not as cool as Dallas Cowboys Stadium,” cracked Colorado QB Brendon Lewis, who's from Texas. “I’m really excited to play in that stadium and playing against that opponent. I did watch them when I was growing up so it’s going to be really cool to actually be able to play against them. It's going to be a fun experience.”

Colorado defensive lineman Mustafa Johnson has been cleared to practice, but there’s no timeline for playing in a game yet. He went pro following last season but didn’t hear his name called in the draft. He was recently reinstated.

"He’s excited, our team’s excited to have him back and I’m excited,” Dorrell said. “We feel he’s really going to help us when we get into the meat of our season.”

Dorrell stressed the importance of cleaning up the little things such as 12 penalties for 118 yards against the Bears.

“We know we can’t have the penalties,” Dorrell said. “That would be a difference in a game like this.”