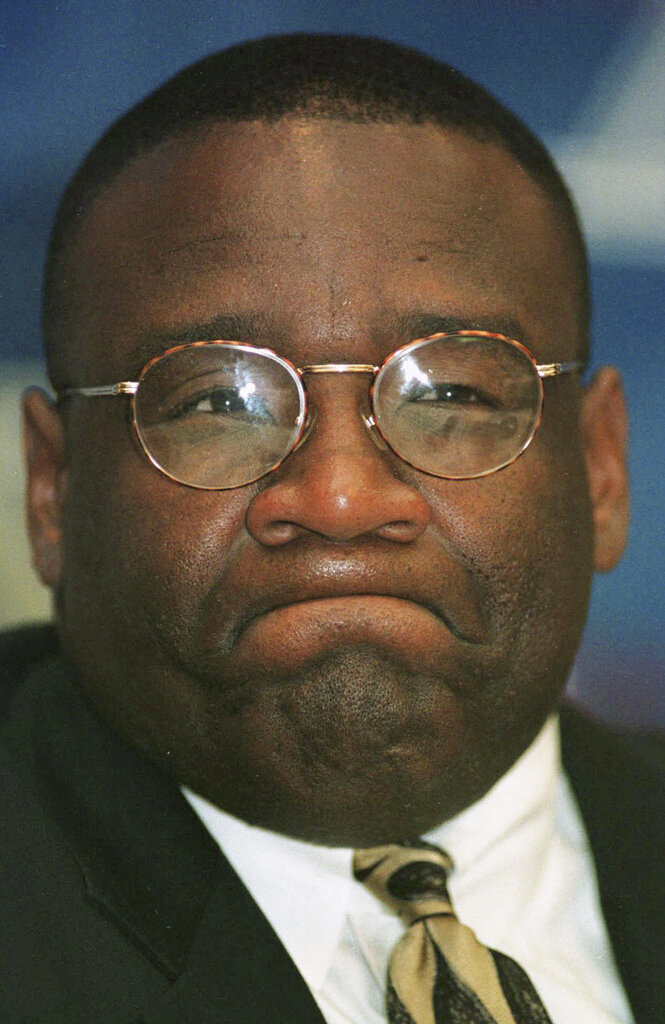 FILE - In this Thursday, July 24, 1997 file photo, University of Oklahoma head coach John Blake ponders a question from the media during Big 12 Conference football media day in Irving, Texas. Blake, a former Oklahoma football player and Oklahoma's first Black head coach in any sport, has passed away. He was 59. (AP Photo/Tim Sharp, File) 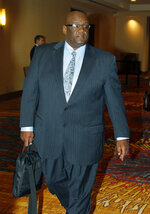 John Blake, the former Oklahoma football player and coach who was the school's first Black head coach in any sport, died Thursday. He was 59.

Blake's wife, Freda, said he had a “heart-related emergency” at his home in Dallas on Thursday morning. She said attempts to revive him at home failed and he died at Baylor University Medical Center.

Blake was hired as the Sooners' head coach in December 1995. He had a 12-22 record in three seasons, but his recruiting success laid the foundation for the program's resurgence.

“We are stunned and saddened by the news of coach Blake’s passing,” Oklahoma athletic director Joe Castiglione said in a statement. “He was never hesitant in displaying love for his family, his players or how much he valued the honor of being a Sooner. His legacy as OU’s first Black head coach in any sport is incredibly meaningful and will live on forever. We offer our heartfelt thoughts and our prayers to his family. He was a Sooner through and through.”

Blake was a two-time Super Bowl champion as a defensive line coach for the Dallas Cowboys. He won the second one under Barry Switzer, who coached him at Oklahoma.

Blake’s only son, Jourdan, said his father's best accomplishments were away from the field.

“He was selfless,” Blake’s only son, Jourdan Blake, said. “He was loving and caring. He was a Christian man. He was all those things before a football coach. He was a dad and a husband.”

“This program is headed in the right direction,” Blake said in his final press conference at Oklahoma. "We came here for a purpose — to get the foundation established to be a winner.″

Blake was right — in 2000, Bob Stoops coached the Sooners to a national title with many players Blake brought in.

Blake remained loyal to the school, even after he was fired.

“I know for a fact he didn't have any tension in his heart towards the University of Oklahoma,” Jourdan said. “He had love for Oklahoma and had nothing but love for the Sooner family, the fans and the organization — the guys up top."

Blake was a four-year letterwinner as a nose guard for the Sooners from 1979 to 1982. He began his coaching career at Oklahoma in 1985 as a student assistant for the Sooners’ national championship team and was a graduate assistant in 1986. He was an assistant at Tulsa before becoming joining Gary Gibbs' staff at Oklahoma from 1989 to 1992.

Blake’s career included a tumultuous stop at North Carolina under Butch Davis that started in 2007. By summer 2010, the NCAA launched an investigation into improper benefits and academic misconduct within the football program. Blake’s close friendship with late NFL agent Gary Wichard was a focus of the probe.

Blake resigned as associate head coach a day after the Tar Heels’ 2010 season opener. The NCAA ultimately charged him with unethical conduct, then issued a three-year show-cause penalty against him in March 2012 among multiple penalties levied in the case.

Even with those difficult times, Blake left a largely positive imprint. Freda, who was married to Blake for 27 years, said the family received hundreds of calls from players he coached on Thursday.

“We do appreciate the love, support, the outpouring of calls, messages, texts,” she said. “We tend to forget how many people he impacted. That is one man of integrity. He is the best father, role model, husband — ever. He showed us life lessons of taking the high road. Everything, he handled with such dignity and pride."

The place he stayed the longest was at Oklahoma, where he built lifelong relationships.

“The thing I’ve always heard about coach Blake is how much he loved and cared for his players and how those feelings were reciprocal,” Oklahoma coach Lincoln Riley said in a statement. “That’s such a profound element of the coaching profession -- developing bonds with players that extend beyond the field.”