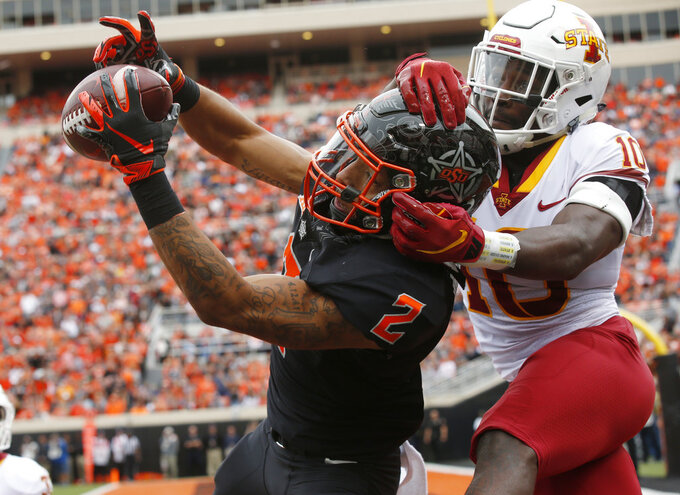 FILE - In this Saturday, Oct. 6, 2018, file photo, Oklahoma State wide receiver Tylan Wallace (2) reaches for but can't hold onto the pass as Iowa State defensive back Brian Peavy (10) defends in the first half of an NCAA college football game in Stillwater, Okla. Wallace is second in the Big 12 with 102.6 yards receiving per game, with 40 catches for 718 yards and four TDs. (AP Photo/Sue Ogrocki, File)

Some things to know about Week 9 in the Big 12 Conference, the start of five consecutive weeks through the end of the regular season when every team plays every week:

Texas Tech (5-2, 3-1) at Iowa State (3-3, 2-2). The Red Raiders and Cyclones have each won their last two games — only league-leading Texas has a longer winning streak among Big 12 teams. And both teams have true freshman starting quarterbacks. Brock Purdy hadn't thrown a pass this season before starting the last two games for Iowa State. He threw for seven touchdowns and ran for another as the Cyclones won in consecutive weeks over Top 25 teams for the first time since 1973 — at Oklahoma State and home against West Virginia . Alan Bowman came on in Tech's opener after an injury and was the nation's top passer before a crushing hit against West Virginia left him with a partially collapsed lung. He missed one game before returning last week to throw for 408 yards and three TDs against Kansas.

Oklahoma State passing game with sophomore receiver Tylan Wallace against Texas secondary with freshman Caden Sterns. Wallace is second in the Big 12 with 102.6 yards receiving per game, with 40 catches for 718 yards and four TDs. Sterns has three interceptions in four Big 12 games while Texas has allowed only 223 yards passing and a conference-low six TDs in that span.

No. 6 Texas has its first six-game winning streak since 2013. The last longer streak for the Longhorns was 13 in a row in 2009, when they won their last Big 12 title and were national runner-ups. ... Texas Tech has allowed only 20 points in the second half of its four Big 12 games. ... Kansas true freshman RB Pooka Williams has 620 yards rushing through his six games. The only player in school history with more yards in his first six career games was Gale Sayers with 709 yards in 1962.

Oklahoma quarterback Kyler Murray has thrown at least three touchdowns in six consecutive games . Murray has completed 115 of 159 passes (72 percent) for 1,977 yards with 25 TDs and three interceptions. His 224.9 quarterback efficiency rating is well above the FBS records in that category set each of the past two seasons by Baker Mayfield, the Heisman Trophy-winning quarterback he followed at OU.