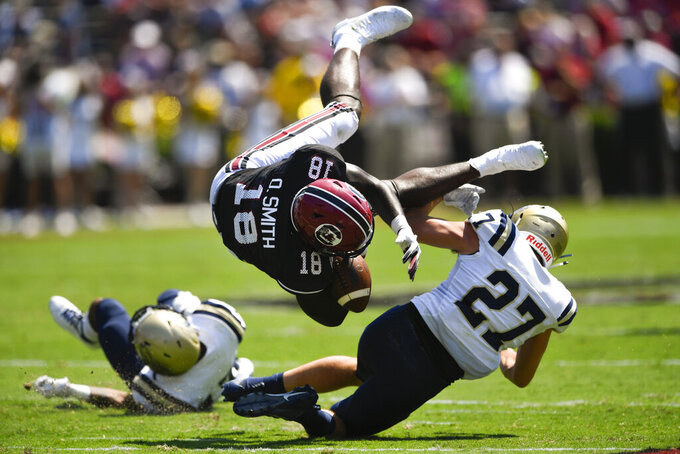 COLUMBIA, S.C. (AP) — South Carolina fans gave quarterback Ryan Hilinski even more love than a second string QB typically gets in his first start and the freshman with the inspiring backstory responded with a storybook debut.

Hilinski completed 24 of 30 passes for 282 yards and two touchdowns and ran for another score leading the Gamecocks (1-1) to a 72-10 win over Charleston Southern on Saturday.

The highly touted Hilinski earned the backup job in spring practice after enrolling early from high school and was elevated to starter after senior Jake Bentley broke his foot in the last play of the opening loss to North Carolina. Bentley is out for at least several weeks.

While South Carolina was recruiting Hilinski, his older brother Tyler Hilinski killed himself while playing quarterback for Washington State. The school promised to do whatever it could to help his family and their Hilinski's Hope foundation in Tyler's honor to help make the mental health of college athletes as important as their physical health.

Hilinski's parents were in the stands and his mother, Kym, said during an in-game interview with the SEC Network that she caught herself cheering for Tyler as her younger son took the field for South Carolina.

"I stepped back and I said, 'Oh my god, I can't believe I just yelled that.' But I think they were both out there on the field today, right?" Kym Hilinski said in the TV interview. "It was Ryan and Tyler, and Tyler was his angel on the field. I hope he's with him for the rest of this season and the next few seasons."

The Gamecocks mostly kept it simple for Hilinski against the FCS Buccaneers (0-2) with plenty of screens, short passes and handoffs. Hilinski did hit Bryan Edwards in stride for a 60-yard touchdown pass and looked like a freshman in the third quarter when he was rushed and sailed a pass for his one interception.

But overall, it was a fine debut for the freshman. Things get exponentially harder next week with No. 2 Alabama coming to town for the Southeastern Conference opener.

Ryan Hilinski didn't speak after the game. South Carolina coach Will Muschamp has a policy that freshmen can't talk to reporters.

Muschamp said dealing with the pain and struggle of what happened to his brother helps Ryan Hilinski deal with social media and the crucible of now being a starting quarterback in the SEC.

"It makes you grow up very quickly," Muschamp said. "It helps you handle criticism."

South Carolina set school records for most yards (775) and rushing yards (493) on Saturday.

Edwards caught five passes for 112 yards. Mon Denson ran nine times for 118 yards and a touchdown, Rico Dowdle had 10 carries for 87 yards and two touchdowns and Kevin Harris ran six times for 147 yards and three TDs, all in second half mop up time.

"I'm pleased with the production we had," Muschamp said.

South Carolina's defense held Charleston Southern to 267 yards — just 85 of them coming in the first half. The Buccaneers lost yards on the opening play of four of its seven first half drives.

"We got our butts kicked," said Charleston Southern coach Autry Denson, trying to shift the program to his vision in his first year as a head coach. "But it is all part of the process of what we are trying to be."

The Gamecocks put in reserves after leading 44-3 at the break. At one point in the third quarter, they played four freshmen in the defensive backfield, including Shilo Sanders, son of NFL great Deion Sanders.

Charleston Southern: The Buccaneers took away $400,000 for their athletic programs. They also got to use athletic facilities at South Carolina and the Carolina Panthers this week after Hurricane Dorian passed close by and chased them from campus. Denson saw the week's events as an opportunity, not a distraction or problem. "We got to experience a bunch of things these guys would have otherwise not got to experience," Denson said.

South Carolina: The lower division Buccaneers helped soothe some frazzled Gamecocks nerves after the opening loss to North Carolina. But whether it shows a team getting it together remains to be seen. The 72 points were the most in Muschamp's four seasons coaching South Carolina and the most for the Gamecocks since beating Kent State 77-14 in 1995.

South Carolina: The Gamecocks host No. 2 Alabama next Saturday. Something that will be said a lot next week: The last time the Crimson Tide lost to a SEC East team was 35-21 against South Carolina in Columbia in 2010.