Fresno St. looks to bounce back in home opener vs. Minnesota 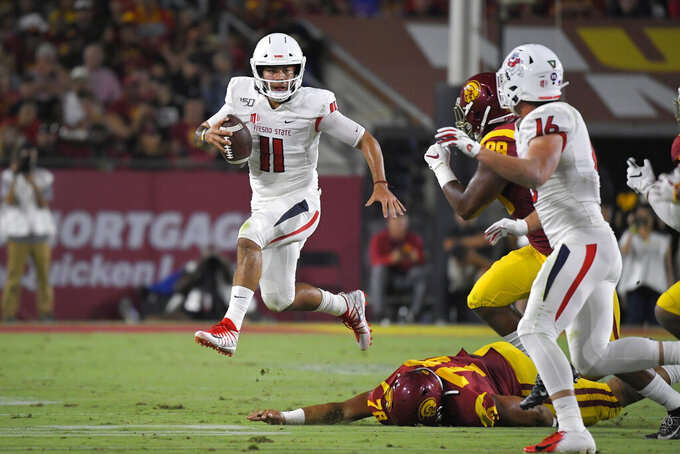 For Fresno State, the season opener was a missed opportunity against a more heralded opponent.

For Minnesota, it was a narrow escape against what should have been an overmatched one.

When the Bulldogs (0-1) host the Golden Gophers (1-0) on Saturday night it will be a chance for Fresno State to rebound from that tough loss at Southern California and an opportunity for Minnesota to show improvement after escaping against FCS-level South Dakota State.

"You learn from any game and any experience," Bulldogs coach Jeff Tedford said. "We'll take those things and see what we can do better. ... When you're not successful, go back to work. You have a bad taste in your mouth."

Fresno State has plenty to feel good about after a 31-23 loss at USC. The Bulldogs outgained the more talented Trojans 462-447 and nearly overcame an 18-point deficit in the fourth quarter.

But they were ultimately done in by allowing a 100-yard kickoff return for a touchdown and then an interception in the end zone thrown by Jorge Reyna with 1:45 to play.

Minnesota trailed 21-20 midway through the fourth quarter against South Dakota State before a fumble set up Mohamed Ibrahim's go-ahead score with 5:39 remaining to give the Gophers a 28-21 victory.

Minnesota is hoping to pile up as many wins as possible early in the year before a tough November stretch that features home games against Penn State and Wisconsin around trips to Iowa and Northwestern.

Here are some other things to watch:

Minnesota quarterback Tanner Morgan is in his second season on the job, but the sophomore still only has seven games started on his resume while still very much in developmental mode for an offense that's stacked with experience at running back and wide receiver.

Morgan had a mixed performance against South Dakota State, essentially matching the team's up-and-down night in the uncomfortable 28-21 victory. His second-down pass on the second drive was picked off, a turnover that Fleck described as a lesson for Morgan to learn that he "can't touch the stove" in trying to thread a throw to Rashod Bateman on a slant route. The SDSU safety made a diving interception.

"I've just got to wait for the second window or move on," Morgan said.

Reyna showed flashes in his first start. He completed 19 of 39 passes for 256 yards and two TDs and added 88 yards rushing. He also missed a couple of open receivers and had the key interception late. But Tedford was pleased overall with the performance.

"There's a lot to build on there," he said. "Jorge proved how tough he is and how competitive he is. ... I didn't think there was anything there that was too big for him at all."

The Fresno State game last season was when Minnesota running back Rodney Smith tore the ACL in his left knee, forcing him to take a medical redshirt and return as a sixth-year senior. Smith told reporters this week that one of the ways he kept his wits about him last fall during rehab was with, yes, cartoons. The animated character "Shadow the Hedgehog" provided inspiration for a new hairdo, too, a red-dyed faux Mohawk he debuted last week against South Dakota State. Smith had 92 yards on 21 carries and appeared to run more assertively as the game went on.

"I was pleased with him," offensive coordinator Kirk Ciarrocca said. "Do I think he can be better? Absolutely. Man, we've seen some spectacular things out of No. 1."

The Bulldogs don't get too many chances at playing Power 5 teams at home. This game will be just the fourth all time at Bulldog Stadium against a Big Ten team, with the last coming in 2014 when Nebraska won 55-19. Fresno State beat Illinois on Dec. 3, 2010, and lost to Wisconsin 13-10 on Sept. 13, 2008. Those losses to the Cornhuskers and Badgers are the only times since 2000 that the Bulldogs lost their home opener.