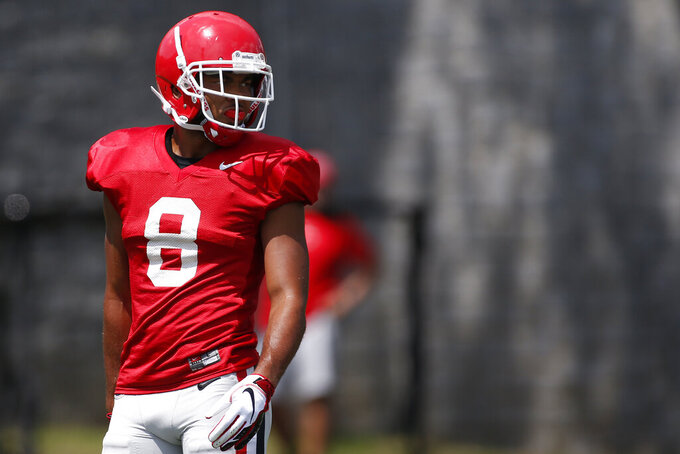 ATHENS, Ga. (AP) — Tyler Simmons doesn't want lack of experience at wide receiver to be the weak spot that derails championship hopes for Jake Fromm and Georgia this season.

Fromm has led the Bulldogs to two straight appearances in the Southeastern Conference championship game. Now the junior is throwing to new targets in preseason practice after losing his top five receivers from 2018.

Simmons, a senior with the modest total of 14 catches in his career, ranks as the Bulldogs' top returner at receiver. Otherwise, there's much talent but little experience at the position.

Fromm, tailback D'Andre Swift and an offensive line regarded as perhaps the best in school history are reasons for Georgia fans to expect more success in 2019. The dramatic turnover at receiver may be cause to doubt the Bulldogs' potential to contend for SEC and national championships.

"Of course we're taking it as motivation," Simmons said Tuesday. "We have a lot of talent in that room. A lot of people have yet to see that. Hopefully we'll get a chance to get out on the field this year and put all that doubt away."

Those departures left a huge void which grew when junior receiver Jeremiah Holloman was kicked off the team in June after university police investigated an allegation that he punched and choked his girlfriend in 2018.

"Of course my initial reaction was it was a little upsetting, just having that big asset gone from the team," Simmons said of Holloman's exit. "It just opened the door for a lot of guys to step up and to show what they can do."

A newcomer to watch at receiver is Lawrence Cager, a graduate transfer who led Miami with six touchdown catches last year. Demetris Robertson, a 2018 transfer from California, has big-play skills. Some of coach Kirby Smart's top 2019 signees — George Pickens , Dominick Blaylock and Makiya Tongue — should make an immediate impact.

Fromm is upbeat about his new targets.

"The guys are ready to step up," Fromm said Friday. They are ready to go out and make plays. ... The freshmen are good football players. They are excited and just ready to figure stuff out in camp."

Fromm said at the SEC media days last month that Simmons was ready to be the Bulldogs' top receiver.

"Of course it means a lot just knowing my quarterback has a lot of trust in me," Simmons said.

Simmons said he is spending more time with Fromm and helping to teach the newcomers.

"We talk a lot. We meet a lot," Simmons said. "Just finding ways we can better ourselves just as a quarterback/receiver duo. I kind of just pass what he teaches me on down to the younger guys."

Simmons had only nine catches, including two for touchdowns, last season. He was quick to note there is more to his role in Georgia's run-first offense. He said he has told his new teammates they must prove they can block and contribute on special teams.

As Fromm is developing chemistry with the new receivers, the Bulldogs also are adjusting to a new offense with new coordinator James Coley. Simmons predicted Coley will add more emphasis to Fromm's passing game.

"Coley is bringing a lot of juice to the offense," Simmons said. "He's kind of balancing the offense a little bit more. ... You're going to see a completely different offense this year. It's really going to be fun. It's going to be an exciting offense. Hopefully everyone will enjoy that."