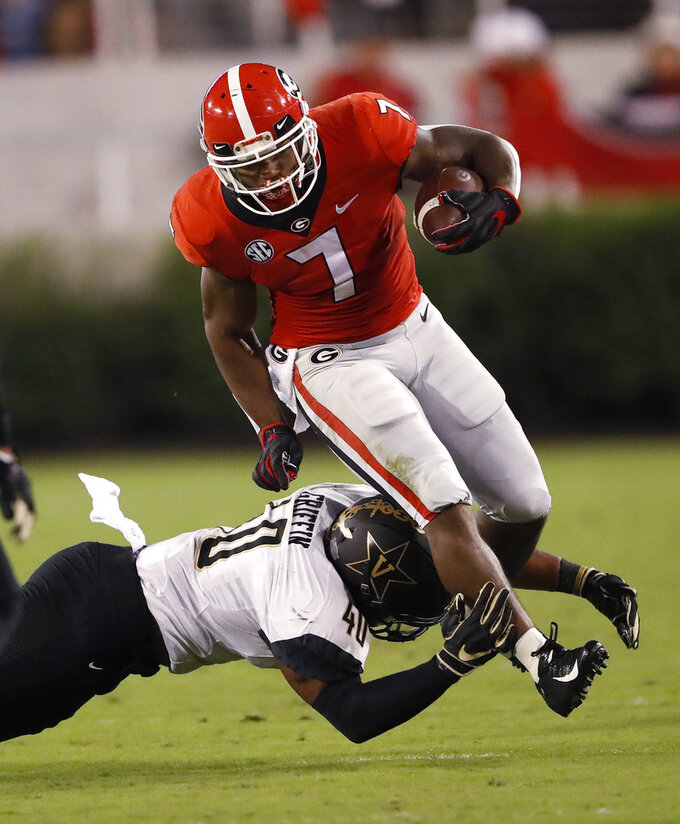 Georgia running back D'Andre Swift (7) is stopped by Vanderbilt linebacker Jordan Griffin (40) during the first half of an NCAA college football game Saturday, Oct. 6, 2018, in Atlanta. (AP Photo/John Bazemore) 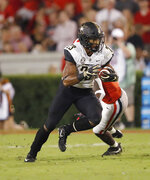 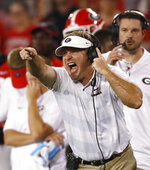 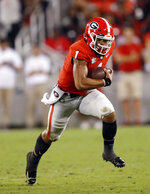 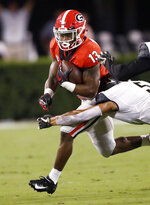 Georgia (6-0, 4-0) trailed for the first time this season following the first of two first-half field goals by Vanderbilt's Ryle Guay less than five minutes into the game.

Fromm threw for a season-high 276 yards while sitting out the final quarter. He completed 17 of 23 passes and did not throw an interception.

"Honestly, if you had told me we'd throw that much, I'd be a little surprised," Fromm said.

Freshman Justin Fields passed for 53 yards and had four carries for 18 yards while playing behind Fields.

After Vanderbilt took the 3-0 lead, Fromm needed only 15 seconds to respond with the long scoring pass to Godwin, who fought off cornerback Joejuan Williams' tackle attempt.

The Bulldogs gained momentum for next week's visit to No. 5 Louisiana State. Georgia then plays Florida, Kentucky and Auburn. The four-game stretch will determine the Bulldogs' hopes of defending their SEC championship and making another run at the national title.

Vanderbilt (3-3, 0-2) trailed only 7-3 after the first period. Kept out of the end zone until the final seconds, the Commodores couldn't spoil Georgia's homecoming as they did with a 17-16 win in 2016.

Georgia's defense contained senior quarterback Kyle Shurmur, who threw for only 169 yards while completing 14 of 28 passes.

"I think there were some times where we moved the ball pretty well," Shurmur said. "Be we have to finish and it doesn't mean anything unless you finish with points."

Fromm threw a 10-yard touchdown pass to Riley Ridley late in the first half for a 21-6 halftime lead. Fromm capped a 75-yard drive to open the second half with a screen pass to tailback D'Andre Swift, who ran 35 yards for the touchdown.

"We're still not playing as good as we want to, but we're starting to kind of hit our stride on offense," Fromm said.

Rodrigo Blankenship kicked field goals of 53 and 28 yards for Georgia. Guay was good from 25 and 42 yards.

Vanderbilt: Kalija Lipscomb, who began the day leading the SEC with 43 catches, an average of 8.6 per game, was held to two catches for 16 yards. Ke'Shawn Vaughn, who had 146 yards rushing in last week's win over Tennessee State, started and had a 43-yard run to launch the Commodores' second drive. Vanderbilt settled for Guay's 25-yard field goal for the 3-0 lead which lasted only seconds.

Georgia: Despite the slow start, the Bulldogs topped 40 points for the fifth time in six games; they beat Tennessee 38-12 last week. Georgia had been outrushed 80-7 before their first possession of the second quarter, when Elijah Holyfield had back-to-back carries to launch an 86-yard drive capped by his 24-yard run. The drive helped the offense gain momentum.

A constant barrage of penalties and reviews slowed the game. Georgia drew 13 penalties, including three for unsportsmanlike conduct, for 115 yards.

Fromm said "We're obviously not very happy with the number of penalties we had."

Vanderbilt had nine penalties for 69 yards.

"Really sloppy football on both sides tonight," said Vanderbilt coach Derek Mason. "... That's not the type of football we want to play and it's not winning football when you're on the road."

Coach Kirby Smart said he had no updated on Georgia left guard Solomon Kindley, who was carted off the field in the first quarter with a right knee injury. Center Lamont Gaillard left the game briefly and had an ice pack on his right hand. He returned to the game and said X-rays were negative.

Vanderbilt tight end Jared Pinkney left the game early in the second quarter with an undisclosed injury. The Commodores were without defensive lineman Louis Vecchio (illness), who had been listed as a co-starter, and starting outside linebacker Charles Wright.

The strong defensive showing, matched with another game with more than 40 points, and turnover-free game should be enough to protect the Bulldogs' No. 2 spot in the Top 25.

Vanderbilt: Following an off week, plays host to Florida on Oct. 13.

Georgia: Plays at No. 5 Louisiana State on Saturday.