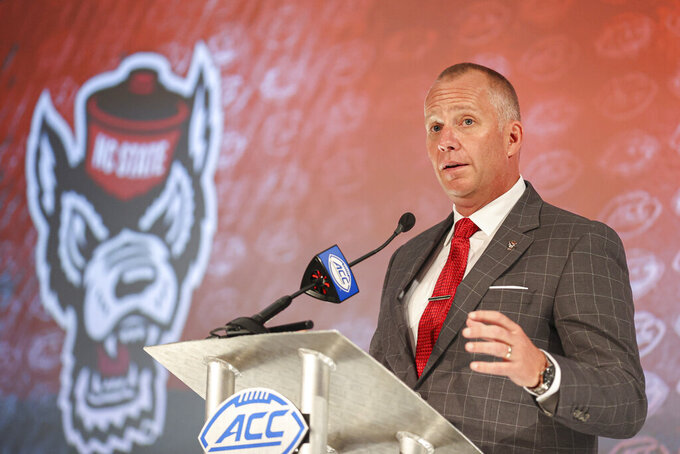 CHARLOTTE, N.C (AP) — Florida State transfer McKenzie Milton said he feels completely recovered from a gruesome knee injury that kept him out college football the last two years and is ready to compete for the starting quarterback job in 2021.

Milton has not played in a game since dislocating his right knee and suffering ligament, nerve and artery damage while playing for Central Florida in November of 2018. He worked with the UCF scout team last year prior to entering the transfer portal and played spring ball with the Seminoles.

“I feel comfortable out there,” Milton said during Atlantic Coast Conference media days on Thursday. “I feel like I can make all of the throws, I can run, I can jump. Physically, I feel fine.”

Prior to the injury Milton was a budding star in college football, going 27-6 in three seasons at Central Florida.

He’s won his last 24 starts, including leading the Knights to a 13-0 season in 2017. During his three seasons at UCF he accounted for 9,760 yards of total offense and 92 touchdowns.

Milton transferred to Florida State knowing Dillon Gabriel is firmly entrenched as Central Florida’s quarterback. At Florida State he will compete with Jordan Travis, who has seen limited action at quarterback for the Seminoles over the last two seasons.

“I promised him an opportunity to come and compete,” coach Mike Norvell said. “That’s what he was looking for, that’s what we were looking for — somebody that could come in with the leadership that he provides."

North Carolina State coach Dave Doeren said he hopes the Wolfpack football team can learn a lesson from the school's baseball team, which lost its bid for a national championship when COVID-19 issues knocked the team out of the College World Series.

Doeren said it was "heartbreaking to watch” and felt terrible for baseball coach Elliott Avent and his players. Doeren said he's talked with several of his players about vaccinations, and how to prevent virus issues from affecting their season.

“It’s not my job to make medical decisions for our football team," Doeren said. "All I can do is educate them, get them around the people that can help them make great choices. That’s what I’m trying to do.”

As it stands now, the ACC is divided into two seven-team divisions with only two cross-divisional games each year, one of those against a pre-determined annual opponent. That means NC State can typically go seven years between games against nearby foes like Duke, Virginia and Virginia Tech.

“Some of our guys don’t ever get to play Duke,” Doeren said. “I just don’t think that’s a good way to put it together. That’s my opinion. I loved last year, playing as many teams as we got to play from the other side. What’s the best way to do that? That’s not for me to decide."

NC State and Duke played each other every year from 1924 to 2003 with the only exception being in 1944 for World War II. But they’ve only played four times since the ACC expanded in 2004.

Wake Forest’s season is off to a rough start with the school announcing it will be without wide receiver Donavon Greene, linebacker Chase Monroe and offensive lineman Je’Vionte’ Nash for the 2021 season due to injuries sustained this offseason.

“These three young men will play a key role off the field this season as they work towards a speedy and safe recovery,” coach Dave Clawson said.

The quirks of a pandemic-altered scheduling rotation means Boston College has earned an unwanted gift: visiting Clemson for the third straight season.

“We need to figure out how many coaches have ever gotten the great opportunity to do that,” second-year BC coach Jeff Hafley said.

The Eagles and Tigers typically play each year and alternate venues as Atlantic Division opponents. BC last hosted Clemson in 2018, then visited the Tigers in 2019. But the league shuffled its 2020 schedule amid the pandemic to play a 10-game league ACC schedule and incorporate Notre Dame for a season, and that sent BC back to Clemson last year to play in front of limited fans in the famously rowdy Death Valley. They’re set to meet again on the same field Oct. 2.

The restaurant chain already has deals with the NFL’s Carolina Panthers and schools in the Atlantic Coast Conference, the Southeastern Conference and several Historically Black Colleges and Universities (HBCUs).