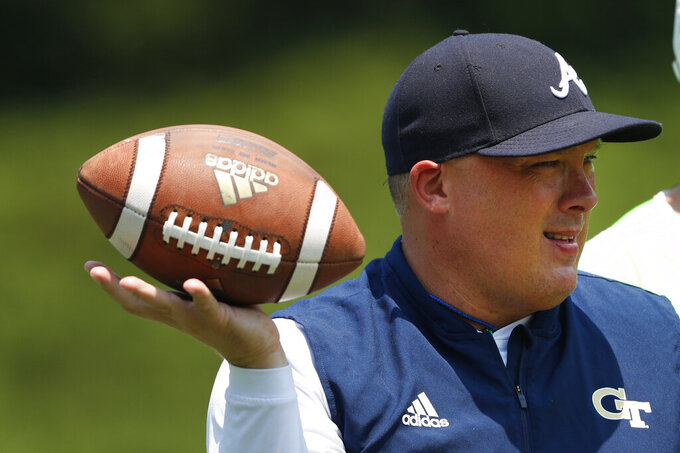 ATLANTA (AP) — Geoff Collins jumped right in the middle of things in the opening minutes of Georgia Tech's first practice.

As the offensive lineman set up for a blocking drill, Collins was there to provide some personal instruction.

Collins is bringing boundless energy to a program that has long struggled in the shadow of mighty Georgia. From his adoration of hometown diner Waffle House to his incessant presence on social media to his countless public appearances the past few months, he's enjoyed an extended honeymoon period while generating plenty of good vibes among the Yellow Jackets' faithful.

Reality, though, is right around the corner.

In a mere four weeks, Georgia Tech will begin its new era with a road game against reigning national champion Clemson.

"It's a positive anytime you have something to look forward to that to the outside world is a big deal," Collins said after the first preseason practice. "It helps you narrow your focus at times. If it's a little hot outside, or it's been four straight days of doing something, I do think it's an external motivating factor to play such a great team that's so well coached, and in such a great environment."

If nothing else, the Yellow Jackets are brimming with confidence.

"It's going to be crazy on August 29th," defensive tackle Jahaziel Lee said. "We're going to shock the world."

Bravado aside, Collins' first season figures to be even more difficult than most coaching transitions.

The Yellow Jackets operated out of the triple option for the past 11 seasons under former coach Paul Johnson, whose quarterbacks were more of an extra running back than any sort of serious passing threat. That will change under Collins, who installed a no-huddle, pro-style offense that will be looking for far more balance between the running and passing games.

Not much is expected of the Yellow Jacket this season.

At the Atlantic Coast Conference media days, they were predicted to finish last in their division.

"The guys are aware," Collins said. "I think it adds a little fuel."

Collins also has dealt with tragedy since arriving at Georgia Tech.

Just before the start of spring practice, defensive tackle Brandon Adams collapsed and died at age 21 while practicing a dance routine. Collins was just getting to know his team, but he received high marks for the way he handled such a shocking loss.

"I don't think there's anybody else that would've handled it better than he did," said Tyler Cooksey, a senior tight end. "He really utilized that time to bring us together and give us time to heal. ... We had to come together. To get through something like that is not easy."

The new coach will need at least a couple of prolific recruiting years to land the sort of players who fit into his scheme, though his first class did yield dual-threat quarterback Tyler Yates, who was voted the top offensive player in Georgia's largest high school classification.

For now, fourth-year junior Lucas Johnson is expected to start.

Never mind that he's yet to throw a pass at the college level.

"We're going to surprise people," vowed Johnson, who didn't play at all last season after sustaining a foot injury. "People are really underestimating the talent we have here and all the athletes that we have here."

Collins was hired away from Temple but has deep ties to the Atlanta area (he's a native of suburban Conyers) and to the Southeast (he's a former defensive coordinator at Florida and Mississippi State).

While Georgia Tech has struggled to carve out a niche in the city's crowded sports scene, Collins embraces the challenge of building an elite program in the shadow on the downtown skyline. It may take some time, but he sees nothing to prevent the Yellow Jackets from drawing sellout crowds every week and competing for championships.

As part of his effort to make Georgia Tech a thriving part of the community, he plans to take his team to a Braves baseball game and an Atlanta United soccer game. Also on tap: he'll take his senior class to a Falcons exhibition game, in hopes of inspiring them to make it to the NFL — or, at the very least, dream big.

"We're just constantly trying to be as good as we can be," Collins said. "Relentlessly pursuing greatness."