Ga Tech looks to mess up No. 5 Georgia's postseason plans 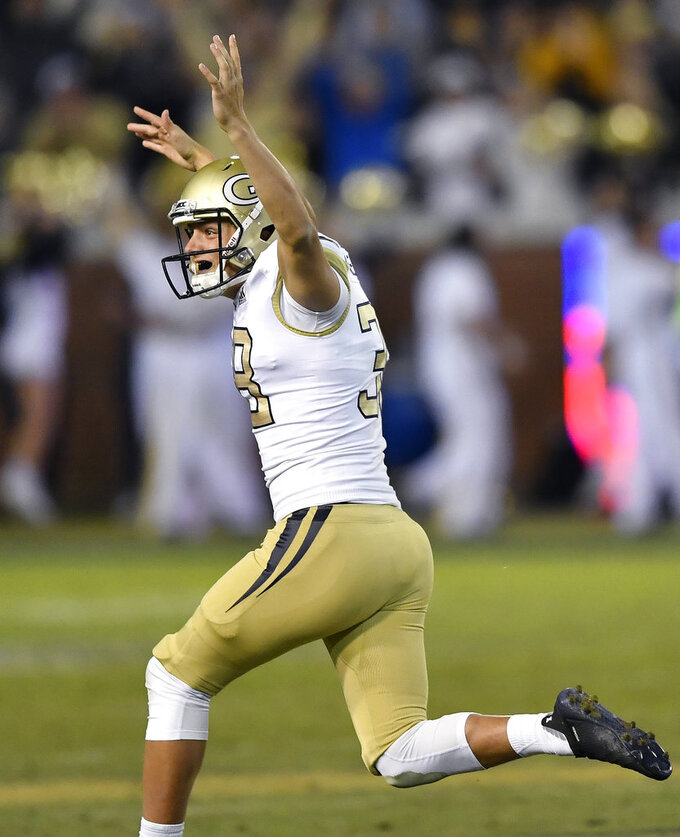 ATLANTA (AP) — Georgia has a looming showdown against the nation's top-ranked team, a game that seems destined to determine if the No. 5 Bulldogs get another shot at the College Football Playoff.

Georgia Tech would love nothing more than to mess up those plans.

The state rivals close out the regular season Saturday between the hedges, where Georgia (10-1) is a 17-point favorite to clear its final hurdle before the Dec. 1 Southeastern Conference championship game against No. 1 Alabama.

The Yellow Jackets (7-4) are sure playing up their role as underdog, even though they are in the midst of a four-game winning streak . With an ample amount of awe in his voice, coach Paul Johnson pointed to Georgia's 701-yard outburst last week in a 66-27 rout of UMass .

"I'm not sure we could do that to our scout team," Johnson said. "They looked unstoppable. Maybe they'll let us play with 12 on defense."

While it might be easy to look ahead, the Bulldogs insist their focus is firmly on this game.

"The other team calls themselves a Georgia team as well," receiver Terry Godwin said. "We've just got to let them know who the real Georgia team is around here."

Georgia is also driven by the memory of what happened in the Yellow Jackets' last two appearances at Sanford Stadium.

In 2014, the Yellow Jackets prevailed 30-24 after tying the game with a 53-yard field goal on the final play of regulation and preserving the victory with an overtime interception near the goal line. In 2016, the Bulldogs squandered a 13-point lead in the fourth quarter and lost 28-27 .

Both times, Georgia Tech's players celebrated by gleefully snapping off branches of the famed hedges that surround the field.

"I definitely don't want them to win here ever again — especially while I'm here," Georgia tight end Isaac Nauta said. "I'm excited to attack this one and make sure those hedges don't get touched."

Some things to watch for when Georgia hosts Georgia Tech in the "Clean, Old-Fashioned Hate" rivalry:

Plagued by injuries much of the season, Swift finally got healthy and ripped off three straight 100-yard games to help Georgia clinch the SEC East title — including a career-best, 186-yard performance against Auburn two weeks ago . He was able to rest up a bit last week, playing sparingly against UMass.

Swift gives the Bulldogs a solid 1-2 punch out of the backfield. He leads the team with 857 yards rushing, averaging 6.9 yards per carry, while Elijah Holyfield has 817 yards and a 6.6-yard average.

No Georgia receiver has eye-popping numbers, but the Bulldogs have plenty of potential targets for quarterback Jake Fromm and his backup, touted freshman Justin Fields, who has played in all but one game.

Riley Ridley leads with 32 receptions, Mercole Hardman has 31 and Nauta is a frequent target with 21 catches. Godwin (15 receptions) has overcome injuries to give the Bulldogs another weapon in the passing game.

"You don't have to have a guy," coach Kirby Smart said. "You can do it by committee."

The Yellow Jackets have two capable quarterbacks to run the triple-option — "run" being the operative word.

Senior TaQuon Marshall paces the Yellow Jackets in rushing with 857 yards while scoring 11 touchdowns, while redshirt freshman Tobias Oliver has come off the bench to run for 808 yards and lead the team with 12 touchdowns.

Neither has much of an arm, and the Yellow Jackets have largely abandoned the passing game during their current winning streak. But that part of the offense can't be totally ignored; Georgia Tech has averaged nearly 36 yards on its six completions in that span.

Georgia Tech has won five of its last 10 games at Sanford Stadium.

Conversely, Georgia hasn't lost to its state rival in Atlanta since 1999. Last season, the Bulldogs romped to a 38-7 victory at Bobby Dodd Stadium.

Ricardo Blankenship has been a huge weapon for Georgia over the last two seasons, connecting on 38 of 43 field-goal attempts and all 115 extra points.

Georgia Tech has gotten a boost from walk-on freshman Wesley Wells, who only took over the job heading into the fifth game of the season after two other kickers flopped. He is 8 for 8 on field goals and perfect on 35 extra-point attempts. Last week, he made four field goals against Virginia , including a career-best 48-yarder and a game-winning 40-yarder in overtime.