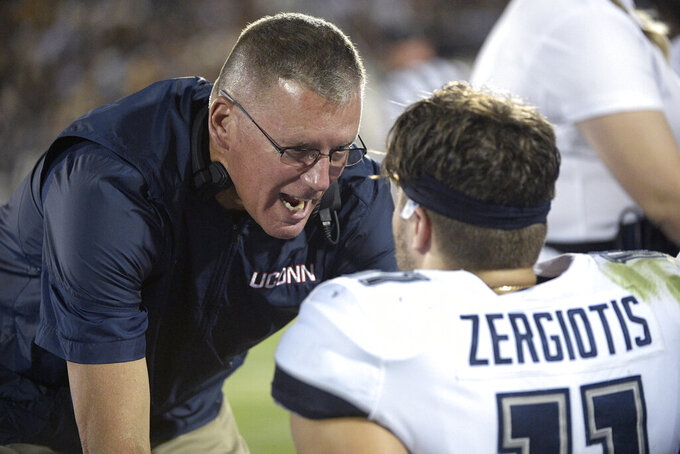 ORLANDO, Fla. (AP) — No. 22 UCF shrugged off its first regular-season loss in nearly three years with a performance that sent a message to the rest of the American Athletic Conference.

The two-time defending league champions are hungry for a third straight title.

"Our kids are resilient," Knights coach Josh Heupel said Saturday night, after his team amassed 607 yards total offense and forced four turnovers in a 56-21 rout of Connecticut in an AAC opener that wasn't nearly as close as the final score might suggest.

"There were a lot of questions because It had been so long since our program had lost a regular-season football game," Heupel added, "but our guys are competitors."

The Knights improved to 29-2 since the start of 2017, bouncing back from a 35-34 loss at Pittsburgh that stopped a league- and school-record 25-game regular-season win streak.

"It's been a long time since we lost in the regular season," said running back Adrian Killins, who had a 73-yard TD run. "The locker room after the game, the vibes and everything were off (last week), it wasn't normal. ... This Saturday we played lights out."

Gabriel completed 11 of 16 passes without an interception for UCF, and he threw TD passes of 73, 16 and 13 yards to Gabriel Davis while building a 42-0 halftime lead.

Darriel Mack Jr. replaced the true freshman at the start of the third quarter. It was his first action of the season after sitting out the first four games recovering from an ankle injury that had opened the door for Gabriel and Notre Dame transfer Brandon Wimbush to play early.

"This is part of the growing process we have to go through," said Edsall, whose has also lost to Big Ten teams Illinois and Indiana since opening the season with a three-point win over Wagner.

UConn's Steven Krajewski came off the bench to throw for 273 yards, including second-half TD passes of 16 yards to Cameron Ross, 12 yards to Ardell Brown and 15 yards to Matt Drayton.

Edsall said the redshirt freshman settled after a turning the ball over twice and played well enough to be the Huskies' starting quarterback moving forward.

"We knew the front end of the schedule was going to be hard," Edsall said. "I was very pleased with the way guys competed in the second half."

Mack, who was 9 of 13 for 97 yards and one TD, led the Knights in the AAC title game and Fiesta Bowl after two-time AAC offensive player of the year McKenzie Milton sustained a serious knee and leg injury in last year's regular-season finale.

Total domination for UCF, as expected. UConn began the game with pair of runs that were stopped for no gain, and it was pretty much downhill from there. Starting quarterback Jack Zergiotis was intercepted on third down. Krajewski's first pass was intercepted, too, and returned 48 yards by UCF's Nevelle Clarke for a touchdown.

Zergiotis lost a fumble on the Huskies' second possession, and Krajewski lost one in the first half as well, when the redshirt freshman lost his grip on the ball trying to throw a pass. UCF was up 42-0 by the time UConn drove into field-goal range twice in the closing minutes of the first half, only to watch kick Clayton Harris miss from 40 and 52 yards.

The Knights tumbled seven spots in the Top 25 after losing to Pitt. Beating a 44-point underdog that's dropped 12 straight conference games and 19 in a row to FBS opponents likely won't do much to improve their ranking this week.