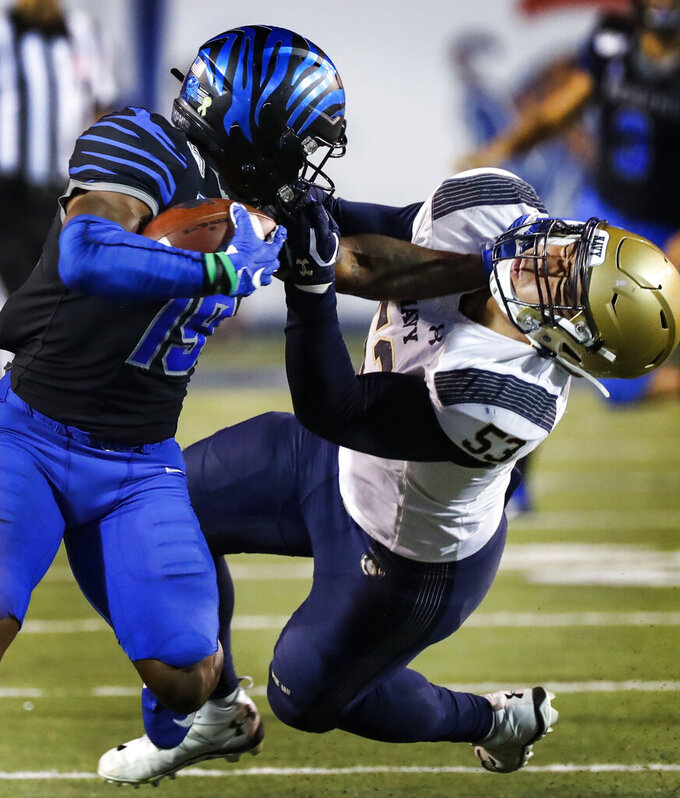 Memphis has cracked the Top 25 behind the emergence of yet another impressive running back.

Kenneth Gainwell has stepped in to more than just fill an unexpected void by becoming the leading rusher in the American Athletic Conference .

The No. 23 Tigers lost running backs Darrell Henderson and Tony Pollard to the NFL draft. Patrick Taylor Jr., who rushed for over 1,100 yards last year, was injured in the season opener and hasn't played since. That opened the door for Gainwell to step into the spotlight.

Gainwell has run for 620 yards and has averaged 124 yards rushing per game to rank sixth among all Football Bowl Subdivision players heading into the Tigers' Saturday game at Temple (4-1, 1-0 American).

The redshirt freshman is on pace to deliver the fourth 1,000-yard single-season rushing performance in the last three years for Memphis. That comes after Memphis (5-0, 1-0) didn't have a single 1,000-yard rusher from 2010-16.

"We say it all the time — it's an offense that's built for playmakers," Memphis coach Mike Norvell said. "We try to go out and identify guys who can come into the system and we can really formulate plans that surround their talents and put them in position to showcase them, whether it's handing the ball to them or throwing the ball to them."

Memphis' assembly line of 1,000-yard rushers began in 2017 when Henderson ran for 1,154 yards during the second year of Norvell's tenure. One year later, Henderson ranked second in the nation with 1,909 yards rushing while Taylor ran for 1,122 yards.

Henderson got drafted in the third round by the Los Angeles Rams . Pollard, who had over 1,000 combined rushing and receiving yards last year while also returning kicks, went to the Dallas Cowboys in the fourth round.

Norvell "does a good job of getting his playmakers involved and making sure everybody touches the ball," Henderson said.

The departures of the NFL draft picks appeared to leave Taylor as Memphis' featured back before fate intervened. Taylor rushed for 128 yards in a 15-10 victory over Mississippi to open the season but injured his lower leg in that game.

The 5-foot-11, 191-pound Gainwell has rushed for over 100 yards in three straight games, including a 209-yard performance last week in a 52-33 victory over Louisiana-Monroe. He averages 8.2 yards per carry.

"To be a good back, you have to have great vision, and he certainly has that," Temple coach Rod Carey said. "The second thing he has is unbelievable balance. And he's really strong. He may not seem like it because of his physical stature, that he's strong, but he's extremely strong. He's tough to bring down, and he's got the speed to go. He's kind of got the whole package right there."

Gainwell, a former high school quarterback from Yazoo City, Mississippi, says he chose Memphis in part because of all the quality running backs the program was producing. Gainwell played four games while redshirting last year but also learned from watching Henderson, Pollard and Taylor.

His current and former teammates aren't surprised at how well he's performing.

"I used to watch him all the time when I was at Memphis, and he always did the extra work, and you're starting to see it pay off for him," Henderson said. "He's just doing great things."

Gainwell's rapid progress has backed up Norvell's confidence in him. Norvell noted that whenever anyone asked him before the season about a lesser-known player who might step up and emerge as a star, he'd always mention Gainwell.

"He knows my talent, he knows how hard I work, so he always tells me to be great," Gainwell said. "He gives me the motivational talks, gives me tips on plays and stuff like that."

Taylor and Gainwell could be playing together again soon enough.

Norvell says Taylor is gaining strength and that the junior's status for the Temple game is uncertain. The coach soon could face a bit of a dilemma on how to distribute carries.

"We've been used to having quite a few quality backs around here," Norvell said. "I think we'll find a way to get them all the ball."