Game changer: Tebow enters Mets camp 'all in' on baseball 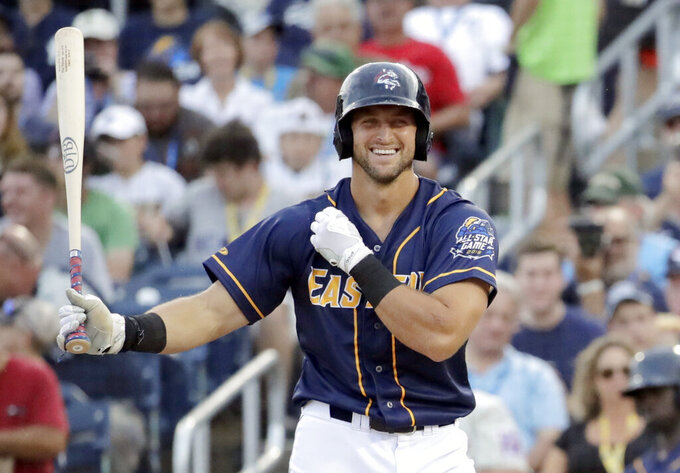 FILE - In this July 11, 2018, file photo, Eastern Division's Tim Tebow walks up to the plate during the second inning of the Eastern League All-Star minor league baseball game in Trenton, N.J. Before picking football over baseball, Kyler Murray got some advice from another famous two-sport star. Tim Tebow says he told Murray to follow his heart when deciding between the Oakland Athletics and pursuing an NFL career. (AP Photo/Julio Cortez, File) 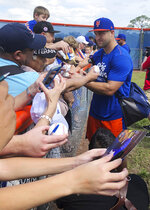 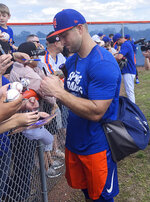 PORT ST. LUCIE, Fla. (AP) — By now, Tim Tebow has shown he belongs in professional baseball. He's fully committed to the game and much more comfortable on the field.

Sometimes, though, he still sounds like a football player.

On his first day at spring training with the New York Mets, the former NFL quarterback was reflecting on last year, when he injured his ankle stepping on a sprinkler head at the beginning of camp.

"I didn't run or I didn't play one snap of outfield," Tebow said Saturday, eliciting big laughs while catching his own slip-up.

Nevertheless, the 2007 Heisman Trophy winner is no fish out of shoulder pads anymore. He's not on the 40-man major league roster, but he's in big league camp for the second consecutive year and ticketed for Triple-A Syracuse in April.

"This will be like, sort of the biggest spring training for me," the 31-year-old Tebow said. "This journey isn't defined by just getting there. I think, shoot, I've already enjoyed it enough to say it's worth it. The whole process. Would that be awesome? Of course it would. It would be such an amazing thing and it would be so enjoyable, but at the same time, regardless of what happens, I know that I'll enjoy it every day and I think that's the biggest thing for me."

In his second full season of minor league baseball, Tebow batted a respectable .273 with six home runs, 14 doubles and 36 RBIs in 84 games for Double-A Binghamton last year. The left fielder socked a three-run homer on the first pitch he saw, then hit .301 in June and .340 in 15 games during July. He even doubled in the Eastern League All-Star Game on July 11.

Eight days later, however, he broke the hamate bone in his right hand while taking a swing. Season-ending surgery squashed any hope of a fast promotion to the majors.

"He did a tremendous job last year," Mets manager Mickey Callaway said. "You have to give him credit for the strides he made."

They were evident Saturday during batting practice in a group that included top prospect Peter Alonso, a brawny slugger and fellow Florida Gators product.

Tebow's thick arms and muscular frame helped him launch several balls over the fence on a back field. He's been working with personal hitting coach Jay Gibbons, an ex-major leaguer who traveled with Tebow throughout the offseason while he worked his other job as a college football television analyst.

Tebow said he took batting practice on countless college ballfields all over the country.

"It's hard contact. I think I need to have a talk with him about his conditioning. He's probably not strong enough," Callaway cracked. "So yeah, it's raw power, it's real, and the bat moves through the zone pretty swiftly."

"This kid has confidence, because he works. And I definitely see a baseball player out of Tim Tebow. Not just because he's in a uniform, but because he wants it so bad," the manager added.

At the souvenir stand between Tom Seaver Curve and Willie Mays Drive, No. 15 Tebow T-shirts were on sale for $32 along with those of several other players. Tebow's shirt was gray, while the big leaguers were in blue.

Regardless of whether he ever makes it to the majors, Tebow has come a long way in a short time on the diamond after spending 2010-12 in the NFL with the Denver Broncos and New York Jets. Remember, it was just a few years ago that he picked up baseball again for the first time since high school.

A national celebrity also popular for his charity work and outspoken faith, Tebow was laughed at and criticized when he embarked on his new career. Last spring, limited to at-bats as the designated hitter because of an ankle he said was broken, Tebow went 1 for 18 (.056) in seven games with the Mets before returning to minor league camp. He said the pain caused bad mechanics.

"It's kind of hard to put into words how much more comfortable I feel, to be honest with you. Just in the little things. Shoot, in knowing what I'm going to grab to bring out there with me for practice, you know?" Tebow said. "Just playing catch, going through the motions, balls off the bat, off the wall, all of those things."

And while some players bemoan the monotony of spring training, Tebow enjoys the workouts under the sun and inside the cage, always trying to improve.

"I love the grind of it. I love the challenge," he said. "Even like for football with training camp, I loved it. I think I was kind of weird that way, but I embraced it. I kind of think I'm the same way with baseball."

So even with revered ex-Florida coach Steve Spurrier pitching him a spot in the new Alliance of American Football, Tebow wasn't interested.

"It wasn't very hard — and they've called a lot. And Coach Spurrier keeps calling — and I love Coach Spurrier," Tebow said. "I'm all in on baseball. No way could I stop and not give this the chance after everything that I've worked for."