Game at Nebraska like a 'homecoming' for Illinois' AJ Bush 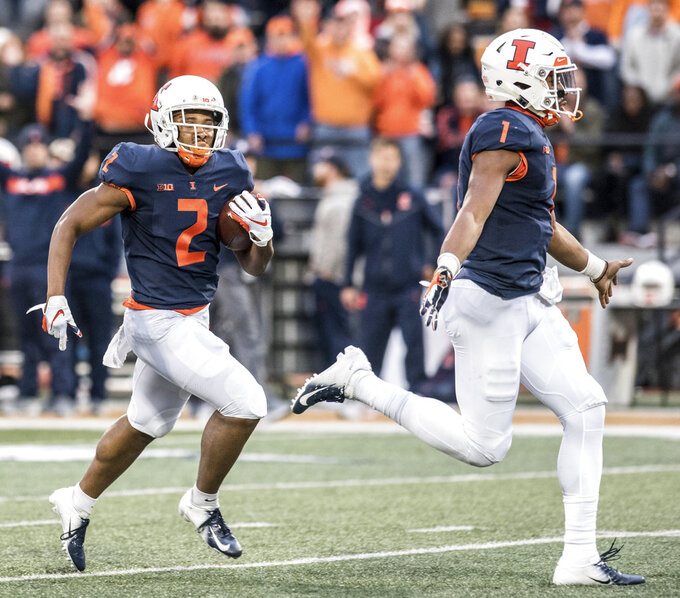 Illinois running back Reggie Corbin (2) is ushered into the end zone by teammate AJ Bush, Jr. in the second half of a NCAA college football game against Minnesota, Saturday, Nov. 3, 2018, in Champaign, Ill. (AP Photo/Holly Hart) 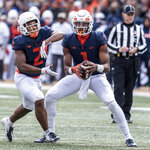 LINCOLN, Neb. (AP) — AJ Bush finally will get to play a game at Nebraska's Memorial Stadium.

His opportunity has come in a way he never could have imagined when he showed up in Lincoln fresh out of high school in 2014.

He left after two years to search for playing time, and he's found it at his fourth school, Illinois, where he won the starting quarterback's job for his only season there as a graduate transfer.

As much as Bush wants to not make a big deal out of his return Saturday, he knows it would be disingenuous to say it's not.

"It's a pretty special day," he said.

Bush then fell back on how it's another game, another chance for the Illini to win.

"I've got a lot of friends there. I've got a lot of people I still talk to in Nebraska. A lot of the team now, some of them I came in with that are redshirt seniors. Others I hosted (on recruiting visits) and took under my wing when I was a sophomore and they came in as freshmen."

Bo Pelini was the coach whose staff recruited Bush to Nebraska out of Alpharetta, Georgia, and he redshirted his first year. Mike Riley took over for the fired Pelini in 2015, and Bush never rose higher than No. 3 on the depth chart.

Instead of transferring to a Bowl Subdivision school and sitting out another season, Bush enrolled at Iowa Western Community College the day before classes started in 2016 and ended up playing 10 games.

From there, it was on to Virginia Tech, where he backed up Josh Jackson last year. Hokies coach Justin Fuente asked Bush to change positions for this season, but Bush wanted to remain a quarterback. He graduated from Tech with a sociology degree in May and headed to Illinois.

Bush has been a good fit in offensive coordinator Rod Smith's dual-threat system. Bush ranks second among Big Ten quarterbacks in rushing, at 67 yards per game, and he's gone over 100 three times. He's completed 57 percent of his passes for 132 yards per game.

"It's a special time when you get a chance to go back to a place you considered home, where you have history," Illini coach Lovie Smith said. "Yeah, there's a little bit of incentive, I'm sure."

It's a bit more than that for Bush, whose former teammates are looking forward to seeing him.

"AJ is a great guy," said offensive lineman Jerald Foster, who arrived at Nebraska with Bush. "It was hard to see when he left, but I knew he was going to do big things. His whole trip — Iowa Western to Virginia Tech then now to Illinois — it's wild. But he's a worker. I'm happy that he's finally going to be able to come back to the stadium. It's going to be funny seeing him on the other side of the ball."

Linebacker Mohamed Barry is a year younger than Bush and also from the Atlanta area, having grown up in Grayson, Georgia. Bush showed Barry around during his recruiting visit, and the two hit it off.

Barry said he and Bush used to rib each other on the practice field and that he looks forward to getting reacquainted on the game field, hopefully in the Illinois backfield.

"When I get my opportunity," a smiling Barry said, "I'll make him know that I'm there."