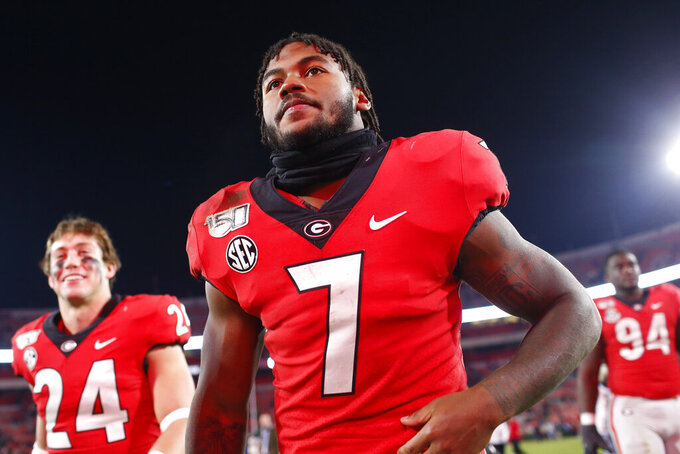 AUBURN, Ala. (AP) — Georgia and Auburn are appropriately old-school for one of the Deep South’s oldest rivalry.

They run far more frequently than they throw, have terrific defenses and are especially adept at clamping down on opponents’ ground games. The vintage formula has worked quite well heading into the fifth-ranked Bulldogs’ visit Saturday to the 13th-ranked Tigers.

It has worked well enough, in fact, for Georgia (8-1, 5-1 Southeastern Conference) to position itself for a potential run into the College Football Playoffs. The Bulldogs are fourth in the CFP rankings and can clinch a third consecutive SEC East title with a win over Auburn (7-2, 4-2), which has a chance to play the spoiler role against both Georgia and No. 4 Alabama.

The Tigers’ only losses have been competitive games on the road to No. 11 Florida and No. 1 LSU.

De’Andre Swift leads a Georgia running game that ranks fourth in the SEC. Defensively, the Bulldogs are the first FBS team in 20 years to navigate the first nine games without allowing a rushing touchdown and rank in the top five in scoring, run and total defense.

JaTarvious Whitlow had been pacing the league’s No. 2 running game for Auburn and is expected to return from a knee injury that limited him to only three rushes in the past three games. The Tigers’ biggest strength is a defensive line led by Brown and end Marlon Davidson.

Both offenses have stayed relatively grounded offensively in a time when even Alabama and LSU have gotten pass-happy.

“This is a team very similar to ours of being able to run the ball,” Georgia coach Kirby Smart said. “They’re committed to the run and want to find different ways to do it. They’ve always done that well.”

Georgia, which has won 14 of the last 18 meetings, has shut out three of its last four opponents since a double-overtime loss to South Carolina.

Some other things to know about the Georgia-Auburn showdown:

Both teams have a winning record on the road in a rivalry that dates back to 1892. Georgia is 16-12-2 in Auburn and the Tigers are 18-15 in Athens. This is the 124th meeting; only Wisconsin-Minnesota (128 meetings entering this season) have played more among active FBS series.

Wide receiver George Pickens was a longtime Auburn commitment before the five-star prospect flipped to Georgia. Now, the freshman is second on the team with 29 catches for 389 yards and has four touchdowns.

"I have definitely talked to Pickens about this week,” fellow Bulldogs receiver Tyler Simmons said. “Just because I know he was committed there for a minute. I know his emotions are going to be going wild. I know we are going to need him to make some big plays. Just telling him to stay level headed. Just hone in on the details and do what you know how to do. Don't try to do anything extra. Don't try to do anything outside of your job. Just do your job."

Georgia hasn’t had four shutouts in a season since 1976. The three shutouts are already the Bulldogs’ most since 1981. Auburn hasn’t been shut out since failing to score against either Georgia or Alabama late in the 2012 season. Those games helped seal coach Gene Chizik’s fate, and led to Gus Malzahn’s hiring.

Auburn is hoping leading rusher JaTarvious Whitlow is ready to return from a knee injury. Freshman D.J. Williams emerged as a solid Plan B in his absence most of the last three games. But the biggest star runner in the game is Georgia’s Swift, who needs just 79 yards to reach 1,000.

One key matchup will be Georgia’s offensive line — led by left tackle Andrew Thomas — against an Auburn defensive line anchored by Brown and Davidson. The Bulldogs starting five average 6-foot-5, 328.6 pounds. Brown has four sacks and Davidson 5.5 with a combined 17 tackles for loss.