Georgia back on track, ready for SEC East showdown vs Cats 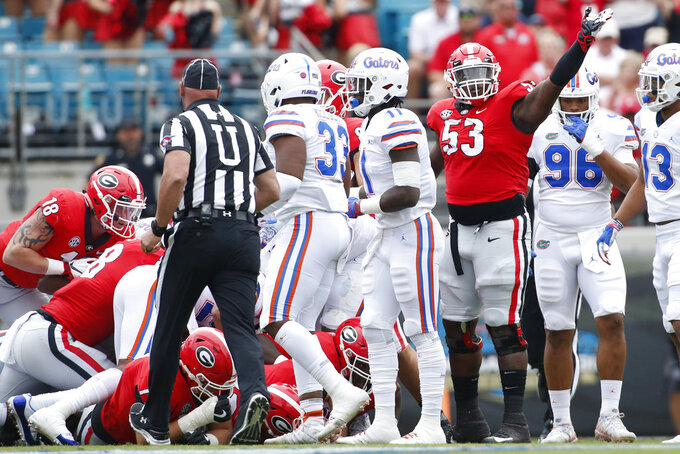 Georgia offensive guard Lamont Gaillard (53) celebrates after Georgia quarterback Jake Fromm (11) rushed for a first down during the first half of an NCAA college football game between Georgia and Florida at in Jacksonville, Fla. Saturday, Oct. 27, 2018. (Joshua L. Jones/Athens Banner-Herald via AP)

ATHENS, Ga. (AP) — With an ugly loss firmly in the rear-view mirror, No. 6 Georgia is back on track for all its major goals.

First up, the Southeastern Conference East.

In a decisive showdown that hardly anyone saw coming at the beginning of the season, the division race will come down to Saturday's game between the Bulldogs (7-1, 5-1 SEC) and No. 11 Kentucky (7-1, 5-1).

"The whole program, everybody involved, knows what's at stake," Georgia defensive back Tyrique McGhee said. "A great SEC opponent like this in Kentucky, with an explosive offense and playing well on defense, everybody knows what has to be done and what we've got to do this week."

Even with identical records and the Wildcats having the edge of playing at home, Georgia opened as a 12-point favorite.

Clearly, the oddsmakers are expecting Kentucky to wilt under the pressure of its most significant game in more than four decades.

Going to great lengths to ensure his team isn't overconfident, Bulldogs coach Kirby Smart really laid it on thick Monday when talking about the Wildcats.

"When you talk to the other coaches, and we all talk to each other week to week, everybody talks about Kentucky's group of seniors," Smart said. "They've got a really good football program, a very physical football program, one that in the last two years each time we played them our players said, 'That was one of the most physical games we had to play, coach.' They are tough and they are physical."

Never mind that Georgia routed the Wildcats 42-13 a year ago on its way to playing in the national championship game.

"We've got a lot of improving to do to be able to complement and to match up with these guys because they have a really good football team," Smart insisted.

If the Bulldogs can win out — and the schedule looks extremely favorable after Saturday — they might get another shot at top-ranked Alabama for the SEC championship. A victory in that game would surely send Georgia to the College Football Playoff for the second year in a row, giving the Dawgs a chance to atone for last season's overtime loss to the Crimson Tide in the national title game.

No one at Georgia is looking that far down the road.

Kentucky has their full attention.

"They have gotten better every year that we have played them, so what they have done this year is no surprise to me," said Isaac Nauta, a junior tight end. "It's a tough place to play, they have a really good team with a lot of good players, so it's going to be a big game."

If nothing else, the Bulldogs are still carrying the memory of their last big road game.

After breezing through the first half of the schedule, they were humiliated at LSU 36-16 .

"Upsets happen all the time," receiver Jeremiah Holloman said. "We've always got to remain humble and do the things we have to do to become victorious."

The loss in Baton Rouge certainly drove that point home. The Bulldogs bounced back with their most complete performance of the season, blowing out Florida 36-17 at the Cocktail Party to keep each of their objectives within reach.

"I feel like we definitely needed that (LSU) game," Holloman said. "We weren't playing the way we can play. I feel like it made us step up and realize for us to get where we were last year, we had to pick up our play."

The Wildcats have allowed just 13 points a game to lead the nation, and they have yet to surrender more than 20 points to any opponent — a figure the Bulldogs have easily surpassed in each of their victories.

"They play complementary defense," Smart said. "They're on the same page at all times. You don't see busts. They understand where each guy is. They leverage the ball well. They tackle well."

He said Kentucky's experience really shows on that side of the line.

"It's a credit to what they've built," Smart said. "Any defense I've coached or any team that I've been involved in coaching that has this many seniors is usually pretty successful. Everybody wants to talk, 'How many stars do they have? How many great recruits do they have?' I say how many games have these guys played? You're pretty successful when you play that many games."