Georgia Bulldogs look for get over the hump in 2019 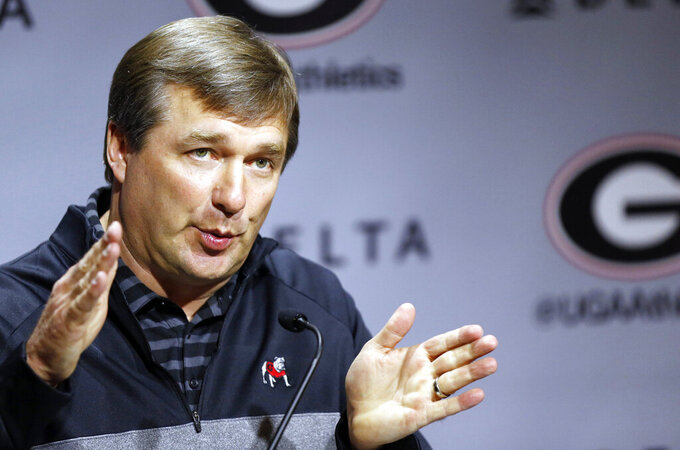 FILE - In this March 19, 2019, file photo, Georgia coach Kirby Smart speaks during an NCAA college football news conference in Athens, Ga. Georgia fully expects to contend for a national championship. Now, the Bulldogs have to show they can finish the job after coming tantalizingly close the last two seasons. (Joshua L. Jones/Athens Banner-Herald via AP, File)

ATHENS, Ga. (AP) — Georgia begins another season with the highest of expectations.

None of that will matter if the Bulldogs don't finish stronger.

Coach Kirby Smart has quickly built a powerhouse between the hedges, guiding his team to the national championship game two seasons ago and a shot at the Southeastern Conference title last year.

Both times, the Bulldogs came up excruciatingly short.

"We'll be as good as we want to be," running back D'Andre Swift said. "We've got to finish better, first and foremost."

Alabama has been the biggest roadblock to Georgia's rise. The Crimson Tide beat the Bulldogs 26-23 in overtime to claim the national title in January 2018, and rallied in the fourth quarter behind backup quarterback Jalen Hurts for a 35-28 victory in last season's SEC championship game.

After that second loss to Alabama, Georgia went on to lose to Texas in the Sugar Bowl.

"We're always looking forward," Smart said. "You learn from your mistakes, but you don't dwell on them."

Some things to watch for from the 2019 Georgia Bulldogs:

Quarterback Jake Fromm will be throwing to a whole new set of targets after losing his top five receivers from last season.

Tyler Simmons, a senior with just 14 catches in his career, ranks as the Bulldogs' top returner. Otherwise, there's plenty of talent but little experience at the position.

Georgia lost receivers Mecole Hardman, Riley Ridley and Terry Godwin, as well as tight end Isaac Nauta, to the NFL draft. The lack of experience grew when junior receiver Jeremiah Holloman was kicked off the team after an allegation that he punched and choked his girlfriend.

"The guys are ready to step up," said Fromm, who is going into his third season as the starter.

There are no questions at the running back position.

Despite some nagging injuries, Swift rushed for 1,049 yards and 10 touchdowns in addition to making 32 receptions for another 297 yards and three TDs. The junior is fully healthy now and sure to come up in talk about the top Heisman Trophy contenders.

"I'm focused on the team right now," Swift said. "The team comes before the Heisman or anything like that."

Smart will have new coordinators on both sides of the line after offensive leader Jim Chaney took a job with SEC rival Tennessee and defensive guru Mel Tucker left to become the head coach at Colorado.

James Coley, who served as co-coordinator with Chaney last season in addition to being in charge of the quarterbacks, now has the job all to himself.

"I'm definitely excited," Coley said. "We all understand that the challenge is to be better, to always be better than the day before."

Georgia also hired from within on the defensive side, promoting outside linebacker Dan Lanning to the coordinator position.

He intends to bring an energetic approach to the job.

"If I coach really casually, and just kind of cruise on cruise control out there, then I expect my players to play that way," Lanning said. "I want to coach with passion so my players play with passion."

Georgia lost a couple of key defensive players to the NFL, but there is plenty of talent ready to fill the void left by cornerback Dandre Baker and outside linebacker D'Andre Walker.

Georgia faces a huge test early in the season when Notre Dame visits Sanford Stadium for the first time in a prime-time clash on Sept. 21.

The teams met two years ago in South Bend, a thrilling game won by the Bulldogs for the first signature victory of Smart's tenure.

But the biggest game of all will likely be the Cocktail Party clash in Jacksonville against rising Florida on Nov. 2. The winner of that game could be the team that advances to play for the SEC championship — and a probable spot in the College Football Playoff.