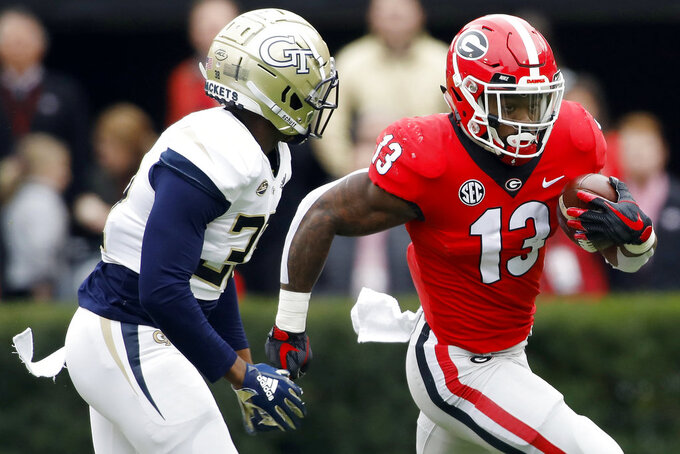 FILE - In this Saturday, Nov. 24, 2018, file photo, Georgia tailback Elijah Holyfield (13) drives past Georgia Tech defensive back Ajani Kerr (38) during the first half of an NCAA college football game in Athens Ga. No. 1 Alabama's typically tough defense will be challenged by No. 4 Georgia's offense that enters Saturday's SEC championship game on a roll. (Joshua L. Jones/Athens Banner-Herald via AP, FIle) 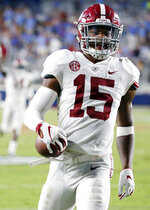 The No. 4 Bulldogs (11-1, No. 4 CFP) scored a combined 111 points in their final two regular-season wins over UMass and Georgia Tech. Georgia stacked an impressive string of eight consecutive quarters without a punt over its final three games.

The challenge for Jake Fromm and the Bulldogs is to keep piling on the points against a stout Alabama defense and keep pace with the powerful Crimson Tide. A high-scoring game may be Georgia's best path to an upset win and repeat Southeastern Conference championship on Saturday.

"I think it's going to be the best challenge we've had, honestly," said Alabama safety Xavier McKinney.

Alabama boasts its customary top-six national rankings in scoring defense and total defense. The defense has been overshadowed by quarterback Tua Tagovailoa's big year, capped by his five touchdown passes in last week's 52-21 win over Auburn .

Fromm said he sees some of the same players back from the Alabama defense he faced at Mercedes-Benz Stadium in last season's national championship game. Since Georgia coach Kirby Smart is the former longtime Alabama defensive coordinator, Fromm said the Crimson Tide's defense also reminds him of the Georgia unit he faces in practice.

"Yeah, they definitely have some returning players," Fromm said. "And they have some really good players. But schematically they're doing a lot of similar stuff they last year, very similar to our defense. And I think it's just kind of very similar to what we see every single day in practice, so hopefully we can be very successful with that."

One year ago, Fromm was completing his freshman season while relying heavily on senior tailbacks Nick Chubb and Sony Michel. Chubb and Michel became the first Georgia tandem to reach 1,000 yards rushing in the same season.

Incredibly, two different Georgia backs are within reach of 1,000 yards one year later. D'Andre Swift has topped 100 yards in four of the last five games to lead the Bulldogs with 962 yards rushing. Elijah Holyfield has 896 yards.

The success of the running game remains the foundation of Georgia's offensive success. Smart said he expected more big numbers on the ground even after losing Chubb and Michel to the NFL.

"Oh yeah. I knew we had a good offensive line coming back," Smart said after Tuesday's practice. "... I knew we were talented on the offensive line and we had good backs. I knew we'd have the opportunity. Whether it would be two 1,000-yard rushers, we're not there yet but we're trying to get there. We probably could have had that. Some of the games we've had, we've taken those kids out and some of those kids haven't played much in games."

Perhaps the biggest surprise is Swift and Holyfield kept enjoying success even while injuries forced constant changes on the offensive line.

"A lot of guys went down," Holyfield said. "But we were very deep at the offensive line. It's one of our strongest positions on the team. So all the other guys who stepped up this year came in and did a really good job ... almost as if the 1 line's been in there the whole time."

Asked how he thinks the line will handle the challenge from Alabama's defensive front, Holyfield said, "I think we'll be fine."

Fromm, both accurate and efficient, has been more than a game manager in his second season. He threw for four touchdowns in the 45-21 win over Georgia Tech despite attempting only 16 passes. He has completed 69.1 percent of his passes, a school-record pace that ranks eighth in the nation.

"They've got a great group of receivers, a lot of guys who are athletic, very talented, speedy," McKinney said. "And then a great quarterback who makes good reads and good throws, accurate throws."