Georgia QB feeling better every day with Vanderbilt up next 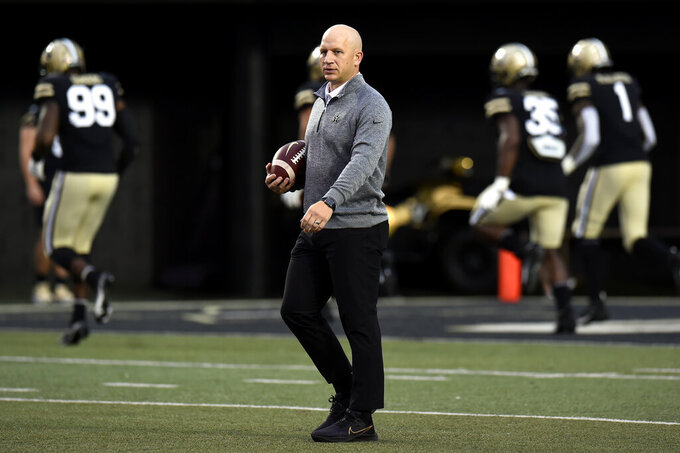 Not so much for the rest of the Southeastern Conference.

Daniels sat out Georgia's win over UAB trying to let an oblique injury heal up a bit more before diving into SEC play. The quarterback has yet to lose a start as Georgia's quarterback, and he goes his seventh straight victory Saturday when the Bulldogs (3-0, 1-0) visit Vanderbilt (1-2, 0-0).

“It never really goes away,” Daniels said of the injury. "We played Clemson, and there was a little dip, so we focused on rehabbing, more of that last week. We rehabbed as much as we could. But this week, we are still doing the same thing, same plan. It is just going to keep getting better and better.”

Daniels returned last week and threw for 303 yards and three touchdowns in a 40-13 win over South Carolina.

The quarterback is a big reason why Georgia ranks fifth nationally converting 57.8% of third downs. He is 14-of-16 for 99 yards passing and a TD on third down, and 10 completions of those passes went for first downs.

Georgia has won three straight against Vanderbilt, which is coming off a 41-23 loss to Stanford. First-year coach Clark Lea says the Commodores are busy focusing on themselves this season with their SEC opener a big learning opportunity.

“We design around the opponent, but we focus on our process,” Lea said. “That'll be our formula heading into Saturday.”

Georgia senior linebacker Quay Walker remembers “preparing all week” for the Commodores last season before the game was canceled due to Vanderbilt’s COVID-19 issues. That left the Bulldogs upset at losing their last home game even as they understood that health trumped playing football.

TRUE TO YOUR SCHOOL

Georgia coach Kirby Smart and Lea share the motivation of coaching at their alma maters. Smart says he knows Lea takes pride in Vanderbilt just as she does at Georgia. Smart called Lea really smart, having spent some time with him.

“He knows and understands football and is trying to build a culture there to be competitive in the SEC,” Smart said. "That starts on the road recruiting, which he hasn’t gotten a chance to do, and it comes with buying into the culture he creates as a coach. I know he’ll do a good job with that.”

The Commodores snapped an 11-game skid with Lea's first coaching victory at Colorado State. They bring a different skid into this game, having lost 13 straight SEC games. Vanderbilt went 0-9 last season playing an all-SEC schedule and lost its final four league games in 2019 after beating Missouri on Oct. 19.

Georgia defensive back Tykee Smith and tight end Darnell Washington are increasing their conditioning work but may not be ready to return this week.

Smart said Tuesday the two “ran really good today” and are “in a much, much better place” though still didn’t join in drills at their positions. It’s enough to make Smart eager to see the two make a full return.

Backup linebacker Rian Davis will miss the remainder of the season with a quad injury.

Vanderbilt lost Re'Mahn Davis to a toe injury requiring season-ending surgery earlier this week. That leaves the Commodores with three scholarship players at running back. Rocko Griffin is replacing Davis as the starter and is coming off a career game with 107 yards rushing.