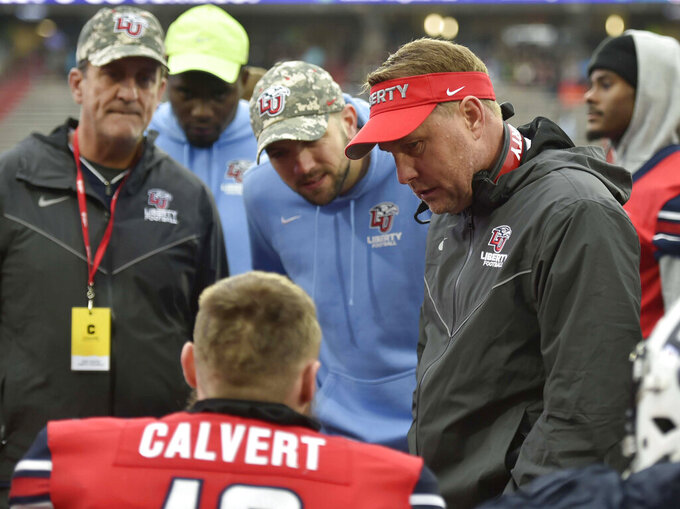 It's a matchup of two relatively new FBS programs. Liberty is looking to join Georgia Southern and Appalachian State as the only teams to move from FCS to FBS and win a bowl game in its first season of eligibility. Georgia Southern is bidding to go 3-0 in bowl games after winning the 2015 GoDaddy Bowl and 2018 Camellia Bowl.

Liberty quarterback Stephen Calvert against the Georgia Southern defense that allows an average of 240.6 yards per game. The senior has thrown for a school record 3,393 yards this season, including six games of 300 yards or more.

Georgia Southern: Quarterback Shai Werts has the fourth most career rushing yards (2,313) of any QB in Sun Belt Conference history. The red-shirt junior also has not thrown an interception in a school-record of 226 consecutive passes, dating to 2017.

LIBERTY: Wide receiver Antonio Gandy-Golden has 1,333 receiving yards, which is 47 from setting a school record.

Freeze began his first season coaching Liberty from a hospital bed and earlier this month received a multiyear contract extension. The 50-year-old had been out of coaching for two years before accepting the job at Liberty. He resigned his position at Mississippi in July 2017 under a cloud of NCAA sanctions and questionable personal conduct. ... In comparison to Calvert's six 300-plus yard passing games in 2019, Georgia Southern had five games of 300 or more yards in its 36-year history. ... Georgia Southern has had an 100-yard rusher in 21 of its last 28 games. ... The game is being played at Exploria Stadium, which is home to Orlando City of Major League Soccer. It's the first non-soccer sporting event at the facility.