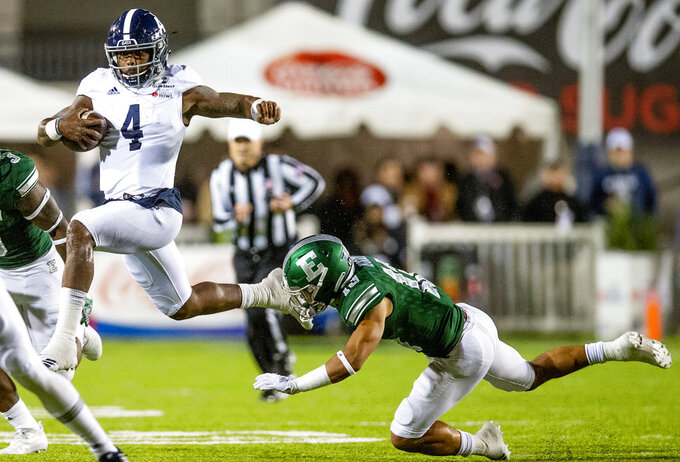 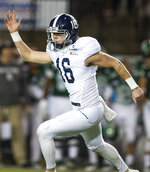 MONTGOMERY, Ala. (AP) — Tyler Bass found a way to top his last-play 50-yard field goal to end the first half.

Bass kicked a 40-yarder as time expired to give Georgia Southern a 23-21 victory over Eastern Michigan in the Camellia Bowl on Saturday night.

"Right when Shai got that first down, I knew we had a chance to kick it," Bass said. "We've been preparing all week for it, all year for it. When I got out there, I didn't think about anything but the snap, the hold and me just kicking it through. That was it."

Georgia Southern completed the biggest turnaround in the Football Bowl Subdivision this season, going from 10 losses to 10 wins.

"I said at the beginning of the year, we're not sexy, we're just blue collar," coach Chad Lunsford said. "That showed tonight."

Eastern Michigan (7-6) had delivered its own big fourth-down play to take the lead for the first time.

Georgia Southern took over at its own 25 with a triple-option offense that attempted fewer passes than every FBS team but Army. Werts completed a 15-yard pass to tight end Ellis Richardson, but Georgia Southern fittingly covered most of the 52 yards with runs.

Werts ran for 79 yards and two first-half touchdowns while completing 4 of 7 passes for 33 yards to receive Most Valuable Player honors. His biggest play came on the fourth-and-10.

"I really should have thrown the ball. Ellis was wide open," Werts said. "Wesley had made a block on the linebacker. There was nobody in front of me so I just took off running."

Eastern Michigan's Glass completed 17 of 25 passes for 204 yards and three touchdowns, including a 75-yarder to Jackson on the opening play of the second half. He had missed the final two games of the regular season with a right leg injury and had only two previous starts.

Glass found Jackson in the back of the end zone to cap a 16-play, 75-yard drive that consumed more than six minutes.

"I was just going through my reads and came back to it late," Glass said. "The linebacker stepped up a little bit and I saw I could get it over their heads."

As it turns out, it left too much time on the clock.

Georgia Southern: Ran for 331 yards on 58 carries. Finished the season without throwing an interception. Had its first 10-win season in FBS and second bowl win in as many tries.

Eastern Michigan: Had eight games decided by one score. Just missed its first eight-win season since going 10-2 in 1987.

Georgia Southern set an NCAA FBS record with only five turnovers this season. The previous NCAA record was eight turnovers in a season by six teams, last done by LSU in 2017. The Eagles were the only FBS team that didn't throw an interception this season.

"When we first got here this program was in shambles." Eastern Michigan defensive lineman Jeremiah Harris.

The five Camellia Bowls have been decided by a combined 17 points, including two winning, last-play field goals.

Georgia Southern returns most of its offensive starters, including Werts, but loses leading rusher Wesley Fields and top tackler Joshua Moon. It will be the second full season for Lunsford, who led the team's rebound from a 2-10 season.

Eastern Michigan is set to lose six starters on both offense and defense, including quarterback Tyler Wiegers. Glass started three games and is a dual threat running and passing.