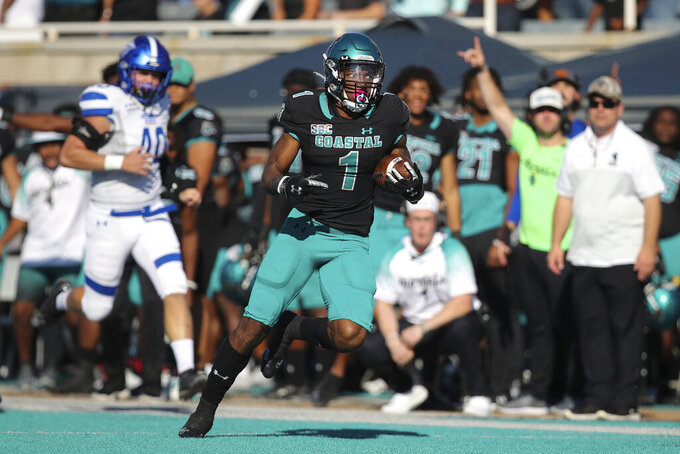 Coastal Carolina running back Braydon Bennett (1) runs for a 75-yard touchdown against Georgia State during the first half of an NCAA college football game Saturday, Nov. 13, 2021, in Conway, S.C. (AP Photo/Artie Walker, Jr.)

Grainger threw for 198 yards and two touchdowns only a few miles where he grew up as Georgia State won its first-ever game over a ranked opponent, defeating No. 22 Coastal Carolina 42-40 on Saturday.

Nose tackle Thomas Gore wrapped up Coastal's Shermari Jones short of the goal line on a two-point conversion with just over a minute left to secure the win.

“I had so much faith in my defense, I knew they'd get a big stop,” Grainger said of those heart-stopping final moments.

Grainger played in rec leagues in Conway and then at Conway High, only a short distance from the Coastal Carolina campus. He knew his family and friends would turn out and wanted to put on a show.

Several fans wore blue T-shirts with Grainger's name and No. 3. By the end, Grainger's edginess turned to joy.

The Panthers (5-5, 3-3 Sun Belt Conference) had been 0-11 all-time against Top 25 teams and had lost all three times it had faced ranked opponents this season. The Panthers rallied in the fourth quarter to end that run of failure.

“It takes 60 minutes and tonight it took every second of that,” Georgia State coach Shawn Elliott said.

Grainger threw a go-ahead touchdown and Tucker Gregg added his third scoring run after Georgia State blew a 28-16 lead in the second half to go up 42-34.

But Coastal Carolina (8-2, 4-2) drew within two points on Bryce Carpenter's 17-yard scoring pass to tight end Isaiah Likely. The Chants tried to find Likely for the tie, but a pass interference call led to another attempt.

This time, Gore quickly corralled Jones from behind for the critical stop.

“We did some good things, we just didn’t do enough good things together,” Coastal Carolina coach Jamey Chadwell said. "Loved how we fought.”

The Chanticleers trailed 28-16 in the second quarter, but moved in front 34-28 after Georgia State managed only 9 yards the first 23 minutes of the second half.

But Grainger directed a 75-yard TD drive. He hit tight end Roger Carter with a 39-yard pass into Coastal territory, then Grainger ran for 8 yards to set up a first-and-goal.

After Grainger was driven out of bounds at the 2 on third down, he moved left and found Dixon a step inside the goal line for the go-ahead score.

Grainger completed 18 of 24 throws for 198 yards and two touchdowns. Jones ran for three touchdown, including an 8-yard score in the fourth quarter to put Coastal Carolina up 34-28 with less than five minutes left.

Braydon Bennett had a career-high 128 yards rushing, including a 75-yard touchdown run in the second quarter.

Georgia State: The Panthers had come close before to Top 25 success, including a 21-17 loss at No. 24 Louisiana-Lafayette on Nov. 4. Coach Shawn Elliott talked about finishing out games and his team listened, with several big plays down the stretch.

Coastal Carolina: The Chanticleers lost their undefeated season last month and their chance at the Sun Belt's East Division with this one. They'd need Appalachian State to lose two of its final three games for a shot at a league title.

Coastal Carolina's run of Top 25 inclusion should end this week. The Chanticleers entered the rankings early in the 2020 season and got as high as No. 9 that year before finishing 14th. They started 22nd in the preseason this year and reached No. 14 on Oct. 17.

Chadwell said McCall had made progress with his upper-body injury, but was not well enough to get on the field this week. McCall had been the nation's leader in pass efficiency rating, completing better than 73% of his passes this season with 17 touchdowns and two interceptions.